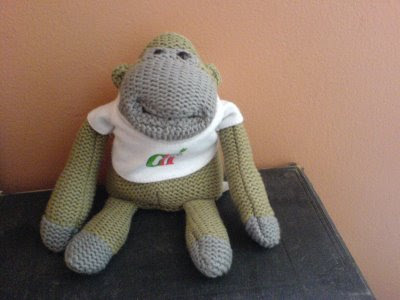 Lots of readers, well one or two of them have been pestering me for an update on what's been happening to David Sky, my runaway pet monkey. "Enough of the theology" they say, "where's the monkey?" So here is an exclusive Exiled Preacher 'Christmas Special' featuring the errant primate. It has been some time since the mischievous monkey left home to join the Taffia (the much feared Welsh Mafia for the uninitiated). Strangely, I haven't missed the cheeky monkey one bit, but we decided to meet up for old time's sake. I asked the monkey about his new life in the mob. Here's a transcript of our conversation:
EP: Is life in the Taffia what you expected? Does the seedy glamour and violence suit you?
DS: Well, it isn't quite like that.
EP: But I thought that's why you left the confines of my 'boring study'.
DS: It was, but Dai Corleone, the great Taffia Godfather has enough henchmen. He needs me for a more specialised and dangerous task.
EP: Which is?
DS: Actually it involves concocting a unique solution to the Don's exacting standards using a highly hazardous liquid.
EP: You mean he's got you making the tea, white with two sugars using very dangerous hubbly bubbly boiling water?
DS: You're so wrong.... he doesn't even take sugar. Doh!
EP: So, you are a tea boy then?
DS: That's what you might call it. But things are going to be different from now on.
EP: Wants you to make coffee now as well does he?
DS: No. I'm going to be a star.
EP: As in a Christmas tree decoration type star? You'd be good at that.
DS: No, no, no. I mean a showbiz star. My name in lights. Fame and fortune.
EP: Are you deluded?
DS: No, straight up. The Don was so pleased with my beverage making skills that he said, "Is there anything I can do for you, Mr. Sky?" I said, "Yes, I'd like to be a proper mobster, roughing people up and that." He said, "Look, that 'ain't gonna happen. Is there anything else?"
EP: What did you say?
DS: I told him that I wanted to be a showbiz star in an all-singing, all-dancing musical.
EP: What, you?
DS: Yes what's wrong with that?
EP: Well, you cant sing and you can't dance for starters.
DS: That doesn't matter. The Don can fix it. He'll make them an offer they can't refuse.
EP: Will he now?
DS: Too right. Look, I've been thinking. I saw something on the telly about the new big musical, Monkey: Journey into the West, written by that bloke from Blurred - Damon Allbran or something. They've only gone and cast a human being dressed up as a monkey in the starring role. I could bring some needed authenticity to the part.
EP: Like because you're a knitted monkey with real synthetic stuffing?
DS: At least I am a monkey.
EP: I'll give you that. But did you know that the whole thing is sung in Mandarin?
DS: What's the problem? I can sing while eating a little Orange.
EP: No, I mean Mandarin Chinese.
DS: Oh, but it wasn't in Chinese when Monkey was on TV in the 80's.
EP: That's because they dubbed it in English. Remember how the actor's lips would move like crazy, but only a few English words would come out? They didn't sync it properly.
DS: I thought that's just how they spoke on the show. I've been practicing doing that lots of lip, few words thing in front of the mirror. I'm really good at it now.
EP: I'm sure you are, but it won't do, will it?
DS: You think they might notice if I didn't sing in Chinese then?
EP: Afraid so. Not even the terrible Taffia can fix this one for you.
DS: But I could have been great, a legend of the stage.
EP: Well you'll just have to settle for being a tea boy for Mr. Corleone. Unless, that is you'd like to come home...
DS: I don't know about that. Let me think. Oh, alright. Life away from the 'boring study' wasn't all that it was cracked up to be anyway. It'll be nice to be back for Christmas.
EP: Promise you'll behave this time, no monkey business?
DS: You know me, Exiled. I'll be good, honest! 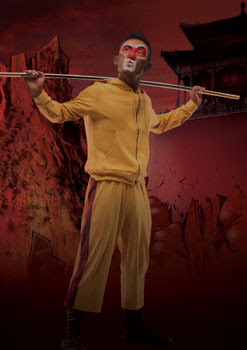 And so ends this heartwarming Christmas tale of peace and reconciliation. But will David Sky, that naughtiest of monkeys be able to keep his promise of good behaviour? We'll just have to see won't we?

Anyone who comments on THIS post is a theological lightweight... woops.

When I read the words "so here is an exclusive Exiled Preacher 'Christmas Special' featuring the errant primate" I thought that you'd bagged an interview with Rowan Williams!

Good to see Mr Sky back. I trust that this won't be the last of his adventures to appear here.

Yours with theological lightweight(ness),
Andrew

I am concerned at the sudden reappearance of the monkey; could it be that Exiled Preacher has upset the Taffia in recent posts and David Sky has been sent to finish him off? Is he, even now, tinkering with the wiring of Exiled's keyboard? Exiled Preacher, are you still there?

Thanks for the monkey update, perhaps we could have a monthly installment to keep us theological lightweights happy!

Thanks for the comments, although the slightly sinister anonymous one has got me feeling a little worried. Could Mr. Sky's homecoming really be part of a dastardly Taffia plot?

The monkey didn't mention our little 'arrangement' now, did he? I have supplied him with sufficient C4. Goodbye, Exiled Preacher....

Arggggg! Not my arch-enemy the evil King Eglon (who, as the Good Book says "was a very fat man"). I'm doomed, doomed.....