An interview with Stuart Burgess

I quiz Professor Burgess about the interface between his Christian beliefs and his work as a scientist. 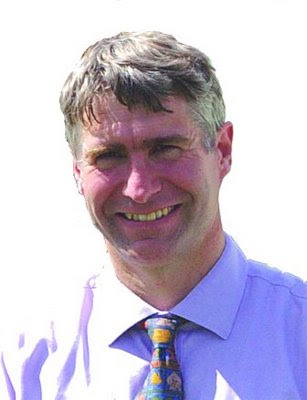 1. Who are you?
I am married to Jocelyn and have 5 children. We attend Zion Baptist Church. I am a Professor at Bristol University in the department of Mechanical Engineering. I have also taught at Cambridge University where I was a Bye-Fellow of Selwyn College. Before academia I designed spacecraft for the European Space Agency.
2. How did you become a Christian believer?
I come from a non-Christian home in the Bristol area. When I went to University in London in 1981 I attended an independent evangelical church and was soon converted on hearing the good news of salvation through Jesus Christ. One of the things that impressed me was the kindness and hospitality of a couple called David and Ruth. They still send Christmas cards to me to this day!
3. The world of science is often assumed to be anti-religion. What do you think about this?
I do not see true science as being anti-religion. In fact I believe that science was pioneered by religious people such as Newton, Pascal, Kelvin, Faraday and Maxwell. Since God is the author of both the Bible and creation there should not be a conflict between science and the Bible. One key to seeing there is no conflict is to recognise God's greatness. God is so powerful that He can create the world in any way He likes whether it is 6 days or 6 seconds.
4. What is Intelligent Design (ID)?
The key idea behind Intelligent Design is simple - that design reveals a designer. In the same way that the intricacies in a spacecraft reveal a designer so the intricacies in a bird reveal a designer.
5. Can ID on its own lead people to God?
ID only shows that there is a Creator not necessarily that the Creator is the God of the Bible. However, having said that, I believe that the design of the earth shows that the Creator is a 'caring' God. The Psalmist says that earth is full of the goodness of the Lord.
6. Do you agree with the ideas of Charles Darwin?
Darwin was correct to say that creatures like finches adapt to the environment by changing beak shape. However, he was wrong to then assume that creatures could undergo enormous changes (change into other types of creature) that are thousands of times greater than minor adaptations. Modern studies show that whilst birds adapt to the environment, they always remain birds. Adaptation can be illustrated by the shuffling of a pack of cards and randomly choosing a subset of cards from the pack. A pack of cards represent the gene pool between parents. Whilst shuffling the genes and choosing a new subset of cards can produce some adaptations, the amount of adaptation is limited by the cards available in the pack. No amount of shuffling can produce dramatic changes. This is why changes through adaptation are very limited.
7. Do you believe that man evolved from an ape-like creature?
I have written a book about this question called The Origin of Man. There are enormous differences between humans and apes and I believe this makes it impossible for man to have evolved form an ape-like creature in the past. Some of the main unique features of humans are: upright stature, fine hands, fine skin, intricate facial expressions, fine language, long childhood, unique marriage and birth, unique brain, unique beauty and unique DNA.
8. What do you think of theistic evolution?
The whole point of evolution is to say that there is no designer, so I cannot see how theistic evolution is compatible with the Bible. Evolution also involves a violent struggle for survival which is not compatible with the Garden of Eden. Evolution involves death before the Fall which is theological against the fact that creation was 'very good'. Even if evolution could work, I do not believe God would use it because it is such a clumsy way of creating. In reality God creates in a very elegant way by just speaking the word (Ps 33).
9. Do you think creation should be a positive message rather than arguing over old bones?
I believe that the creation message is a positive one - that the beauty and intricacy of creation reveals a Creator. You do not need a PhD in genetics or design or biology to see that there is a Creator. A young child can see evidence for a Creator as much as a professor at University. But people will always argue over bones and scientific data because data can always be interpreted in different ways. Having said this, there is a place for Christians who are scientists to stand up for true science.
10. Do you believe in six-day creation?
I believe that God created the Universe in six 24 hour days as described in the book of Genesis. I believe that He made a mature fully functioning Universe that would have had the appearance of age from the beginning of creation. Adam and Eve would have looked adults, and trees would have been mature and producing fruit. In the same way, stars were already sending light to the earth. The idea of mature creation is logical to me since engineers do this all the time. When an engineer makes car or an aeroplane it is a mature fully functioning system that in some ways has the appearance of age. Because creation is a supernatural event, it is impossible to scientifically measure or prove the age of the earth.
11. Well, thanks for dropping by Stuart. You can discover more books by Professor Burgess at Day One Christian Books.
Posted by Guy Davies at 12:09 pm

Comments suspended due to silly remarks by some juvenile atheists. 'The fool has said in his heart "there is no God.'"(Psalm 14:1).