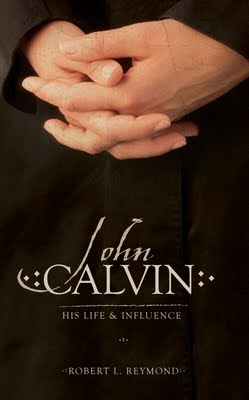 John Calvin: His Life & Influence,
by Robert L. Reymond, Christain Focus, 2008 repr, 152pp
This book began life as a four-part lecture series on the life and influence of John Calvin. Reymond does not offer a full length biographical study here. You will have to look elsewhere for that kind of thing. But what you get is a first class introduction to the life and thought of the Genevan Reformer. Reymond writes as a self-confessed admirer of Calvin, but he is not afraid to be critical when he thinks that Calvin was in the wrong. The writer is especially dismissive of his ideas on the Lord's Supper (p. 71-72). I think this is misguided. In Calvin's treatment of Communion we see the Reformer at his insightful best. Better I would say to question Calvin's paedobaptist views, but Reymond, a staunch Presbyterian would certainly not agree with me there.
The book follows the basic plot line of Calvin's life, interweaving an analysis of the key aspects of his theology. The teaching of Calvin's famed Institutes of the Christian Religion is ably summarized. The seminal importance of the Institutes in Protestant thought is clearly demonstrated.
The great blot on Calvin's character, for which history has judged him rather harshly was the burning of the heretic Michel Servetus in Geneva. Reymond gives full attention to this matter in the final chapter. He does not exonerate Calvin for this role in the affair, but he rightly asks that we understand the Reformer's actions against the background of his times, where the burning of heretics was sadly commonplace on both sides of the Protestant and Roman Catholic divide.
What I especially liked about Reymond's treatment is that it is an unashamedly Christian work. Some contemporary Christian historiography makes too much of a concession to secular assumptions. The facts are narrated and interpreted, but God's providential action is virtually left out of the picture. Great periods of Reformation and Revival are described merely in terms of social trends and the work of human actors. Reymond's offers a theological reading of history that sets Calvin's life and work in the context of God's overruling providence. While basing his work on solid research and a careful examination of the historical evidence, Reymond does not set his theological assumptions aside. This can be seen right from the opening chapter, which is entitled, God's Preparation of the Future Reformer. In the final chapter he urges his readers to consider that it is in God's providence that he has arranged for them to take up this book and learn its lessons.
Reymond has written a gripping account of Calvin's life and achievements. This study is easy to read and accessible without dumbing down, and well researched without being unduly technical. The author invites us to join him in thanking God for the theological giants of the sixteenth century, especially for the towering figure of John Calvin. A brief bibliography gives hints for further reading. Still wondering what the fuss is about with all the talk of the 500th anniversary of Calvin's birth? Then tolle lege - take up and read this book.
Posted by Guy Davies at 4:31 pm

AGreed, excellent short work that is accessible to all. I especially appreciate the Servetus treatment.