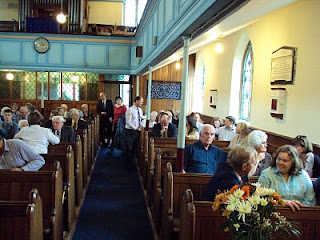 In April 1810 George Phillips preached at an open air meeting. His text was Acts 16:14. He drew his listeners' attention to Lydia, whose heart the Lord opened to heed the message spoken by the apostle Paul. Many in the al fresco congregation were known to him, but the outdoor surroundings were something of a novelty. Phillips was no longer welcome in the pulpit of Westbury Leigh Baptist Church of which he was until recently the pastor. He was converted under the preaching of Charles Wesley and some in the congregation suspected him of having Arminian leanings. Not wishing to be a cause of strife among the people, the preacher resigned his charge.
That is why he found himself addressing an open air gathering one Sunday in April two centuries ago. This was to be the first of a series of outdoor meetings that led to the founding of Penknap Providence Church, Dilton Marsh, Wiltshire. By the October of 1810 a place of worship had been erected on Penknap field. The church was called 'Providence' as the open air meetings held prior to the building of the Chapel were not once hindered by rain.


The newly founded congregation consisted of only thirty members. By the end of Phillips' twenty three year ministry over 200 people had been baptised and added to the church. So much for the pastor's Arminian predilections, the new work was established as a Particular Baptist Church holding to the decidedly Calvinistic Second London Baptist Confession of 1689.
And so it was that two hundred years later almost one hundred people gathered at the Chapel on Saturday 4th September to praise God for blessings past and look forward to his blessing upon the work in the future. Geoff Thomas of Aberystwyth preached an encouraging message on Romans 15:13 (which you can listen to here). We were pleased to welcome friends from neighboring fellowships and local dignitaries including the Mayor of Westbury and Andrew Murrison, MP. A special booklet detailing the history of the church was made available.
Compared with the large congregations of old a relatively small number of believers now meet at the Chapel Sunday by Sunday to worship God. But we still hold to the faith of our fathers, and efforts are made to reach out to the community with the gospel.
Please pray for a fresh outpouring of the Spirit upon the work, so that we may see the Lord opening the hearts of many to give attention to his saving Word in these days.
Much has changed since the founding of our church, but Scripture assures us that 'Jesus Christ is the same yesterday, today, and for ever.' (Hebrews 13:8).
* An edited version of this report will appear in November's Evangelical Times. 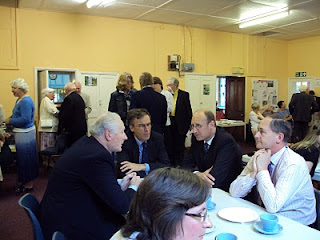 Glad to hear that things went well on Saturday, you were in my prayers.