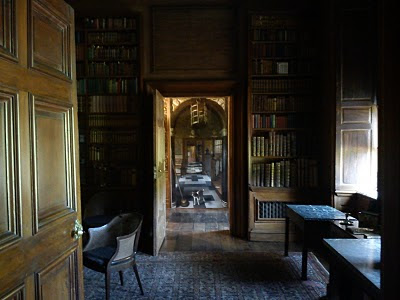 On Saturday our children attended a Youth Conference at Grace Church, Westerleigh. While they were there Sarah and I visited Dyrham Park, a National Trust property which is not too far away from Westerleigh, making it handy for collecting the children at the end of the day. We had a lovely lunch and enjoyed a guided tour of the gardens before exploring the 17th century stately home. Its art collection includes a couple of paintings by the Dutch perspectivalist, Samuel van Hoogstraten (1627-1678).

The artist, who honed his skills in Rembrandt's Amsterdam studio, hailed from Dortrecht. The town earned its place in theological history by hosting Synod of Dort in 1618. The Synod formulated the  so-called "Five Points of Calvinism" to rebut the five points of the Arminian Remonstrants. It seems that Samuel van Hoogstraten's approach to painting was influenced by Calvinistic thinking. In an essay on The Visible World. Samuel van Hoogstraten’s Art Theory and the Legitimation of Painting in the Seventeenth Century, Thijs Weststeijn writes,

Van Hoogstraten’s focus on the painter’s careful examination of the details of the visible world can be related to his Calvinist background, and to the formulation in the Dordrecht catechism that revelation takes place not only through scripture, but also through the ‘Book of Nature’. The notion that creation is God’s artwork, and that the painter in particular should pay attention to this, are commonplaces in the international tradition of art theory.

You can see a fine example of one of van Hoogstraten's works in the image at the top of this post (from a photograph taken inside Dyrham House). At first glance you may think that I have taken a shot of a room with an open door which leads to a long corridor. But look again (click on the image to enlarge). The passageway with the white tiled floor featuring black crosses, with a sweeping brush and small dog in the foreground, is in fact a perspectival painting hung in a doorway.

You can read the whole of Thijs Weststeijn's fascinating essay  on Samuel van Hoogstraten’s art theory here (PDF).
Posted by Guy Davies at 8:00 am