What is Remythologizing Theology? 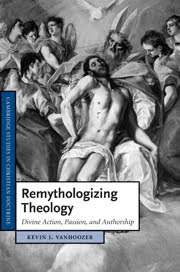 Remythologizing Theology: Divine Action, Passion and Authorship
by Kevin J. Vanhoozer, Cambridge University Press, 2010, 539pp
(Review series Part 1)
To date most of Kevin Vanhoozer’s published theological work has been in the area of method. In his The Drama of Doctrine, (WJK, 2005), he proposed a “canonical linguistic approach to Christian theology”. Theology, he argued is not first and foremost about systematising the data of biblical revelation. The aim of theology is to enable the people of God to play their roles in the great drama of redemption. His focus was not simply on the words of Holy Scripture, but the communicative action of God who acts by speaking to accomplish his purposes in the world.
The present work sees Vanhoozer put his methodological proposals into practice in this full-length study on the doctrine of God. The book’s title immediately calls for explanation. What exactly does the author mean by, “Remythologizing Theology”? Bultmann endeavoured to demythologise the Bible. He regarded the supernatural and miraculous content of Scripture as mythological. Who, he asked, in the age of the electric light bulb, could believe that Jesus was born of a virgin, walked on water, or rose from the dead? The Bible had to be stripped of these "myths" in order to get to the core spiritual and ethical message of the Christian faith.
The trouble with Bultmann’s demythologising project was that he rejected the possibility that God intervenes in the phenomenal world of space and time. His actions take place in the noumenal world of the human consciousness. This Kantian depiction of God’s action robs revelation of its objective character and places the focus on subjective human awareness of the divine. The German philosopher Ludwig Feuerbach took his one step further, arguing that god is simply the projection of human consciousness. The demythologising of theology is the high road to atheism.
By remythologizing Vanhoozer is not suggesting that we need to put the miraculous “myths” back into the Bible. What he has in mind in “remythologizing” is not “myth”, meaning a sacred story with little relation to the real world, but “mythos”, meaning “dramatic plot”. He offers this definition of remythologizing theology,

By remythologizing theology, Vanhoozer puts the accent on God's own self-projection, the communicative action of the triune God as revealed in the dramatic plot of biblical revelation. “Communicative action” are the key words here. The writer wishes to reconfigure God’s relationship to the world in terms of divine communicative action rather than the causal account of God’s interaction with the world favoured by classical theism.

Classical theism tends to view God as the supreme and perfect being and the metaphysical First Cause of the universe. For Vanhoozer, God’s being is in his communicative act. He is not so much the One to whom limitless perfection might be attributed by human beings, as the God of Abhraham, Isaac and Jacob, who is revealed in his word-acts as disclosed in Holy Scripture. He is better described as the Author rather than First Cause of creation. This emphasis on divine self-revelation safeguards theology from Feuerbach’s suggestion that God is the projection of human ideas of infinite perfection. In addition, in shifting the focus from God’s causal relation to the world to his communicative action, Vanhoozer hopes to provide a more deeply personal account of how God interacts with his human creatures.
Posted by Guy Davies at 9:40 am