From Shadow to Substance by Samuel D. Renihan 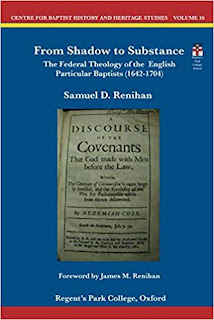 In the seventeenth century English Particular Baptists (believers in the Calvinistic doctrine of particular redemption or definite atonement) faced the charge that in rejecting infant baptism for baptism on profession of faith, they had jettisoned a key tenet of Reformed covenant theology. They were no more 'Reformed' than their European Anabaptist cousins.

As such, Cameron reasoned, Sinai was neither a full-blown covenant of works, or the covenant of grace, but something in the middle, which served as a means to an end. The end being the covenant of grace that promised life to all who believe in Christ. The old covenant was a type of the greater blessings what are offered under the new covenant. Israel enjoyed the earthly benefits of the Mosaic covenant, but by faith looked beyond the types and shadows of that dispensation to Christ and his redeeming work.

A similar line was taken by the Puritan divine John Owen (1616-1683). In his massive commentary on Hebrews he argued that the old covenant was a covenant of works in subservience to the covenant of  grace. He included the Abrahamic as well as Mosaic covenants within this purview. The old covenant had to do with carnal realities such as Abraham's family line. The covenant was with Abraham and his 'seed', sealed by circumcision. God promised that Abraham's 'seed' would possess Canaan. The covenant community was bound to obey God as a condition of remaining in the land. The Mosaic covenant further clarified Israel's covenant obligations in the shape of the law. Again, for Owen the old covenant foreshadowed the new covenant in Christ. But when the new covenant was established, the carnal ordinances of the old were abolished.

Owen posited that under the old covenant it was necessary to sort Abraham's seed into two lots, carnal and spiritual. First, Abraham's natural descendants, from whom Christ  would one day come, but not all of whom were elect. Second, those, who, like Abraham believed the promise of salvation in Christ, and were among the elect. With the advent of the new covenant, the carnal aspect is done away with, said Owen, for Christ, the 'seed of Abraham' had arrived. That is why circumcision is not the sign of belonging to the new covenant community, but baptism. Only those who believe in Christ now belong to the covenant people of God.  Owen was a Paedobaptist, but his construal of the relationship between the old and new covenants played into the hands of Particular Baptist writers.

Nehemiah Coxe (1650-1689) was especially taken with Owen's treatment of the covenants. When it came to the Mosaic covenant, Coxe simply referred his readers to Owen. His innovation was to take Owen's arguments and apply them in a more consistent way to the Abrahamic covenant. Paedobaptists insisted that the Abrahamic and Moasic covenants were administrations of the covenant of grace. Just as under the old covenant, the promises were made to Abraham and his seed, so now under the new covenant, the same principle applied. Therefore the children of believers should be baptised, as baptism is the new covenant counterpart of circumcision.

But, Coxe pointed out, if Owen was right, that does not follow. The Abrahamic and Mosaic dispensations were covenants of works that foreshadowed the covenant of grace, but they were not to be identified with it. The new covenant was a testament, and the testament only came into effect on the death of the testator, Jesus (Hebrews 9:15-17). Moreover, carnal aspects of the old covenant such as  membership of the covenant community by ancestral secession from the Patriarchs and an earthly promised land had been phased out now that a new and better covenant was in operation. Belonging to the new covenant people of God was not defined by birth, but belief in Christ, followed by baptism.

Paedobaptists countered, what about Acts 2:38-39, where Peter says that the promised the gift of the Spirit, "is for you, your children, and for all who are far off"? Coxe and others replied that not even Paedobaptists taught indiscriminate baptism of "all who were far off". The plain teaching of the New Testament was that baptism followed repentance and faith. That is what happened on the Day of Pentecost, Acts 2:41-42. Baptism was not therefore to be extended to the infant children of believers.

The theological deductions of the Paedobaptists from the Abrahamic covenant did not hold water (if you'll forgive the pun). Following the regulative principle, Particular Baptists held that worship ordinances such as Baptism and the Lord Supper had to be derived from definite  biblical commands, not supposed deductions from Scripture. Besides, if a 'deduction' contradicted an express command, the deduction was bound to be wrong. Particular Baptists certainly believed in making deductions from Scripture, but theological reasoning had to be subservient to the express teaching of God's Word. Particular Baptists were consistent in their application of the Reformation principle of Sola Scriptura to the matter of baptism, its mode and subjects.

Deprived of 'signs and seals of the covenant' Paedobaptists alleged that children of Baptist parents were little better off than children of the ungodly. 'Not so' said the Particular Baptists . There is no evidence that children of believers baptised in infancy partake of the blessings of covenant of grace unless or until they come to faith in Christ. The same is true of children from Baptist families. Yet children from Christian homes have the great privilege of being exposed to the means of grace in their families and through their involvement in the life of the church. When the children of Baptist parents profess faith in Christ for themselves, they are duly baptised in line with the New Testament pattern.

Particular Baptists Churches published the First London Baptist Confession of Faith in 1644. A Second London Baptist Confession was agreed in 1672, but was published more widely in 1689. The second confession largely follows the wording of the Presbyterian Westminster Confession (1647) as revised in the Savoy Declaration (1658) of the Independents. (See Tabular Comparison of the three documents). The Baptists wished to be identified with mainstream Puritan Orthodoxy, while maintaining their distinctives on covenant theology, the church and Baptism.

John Owen was a key figure in drawing up the Savoy Declaration. The Particular Baptists agreed with his position on the covenants and also that the church should be a gathering of 'visible saints'. The inconsistency between the Independents' doctrine of the church and their Paedobaptism would later lead to the 'Halfway Covenant' controversy. This was over the status of unconverted children of believers in the Congregational Churches of the New World. Should they be admitted to the Lord's Supper, for example? No less than Johnathan Edwards would come a cropper on that one.

Interestingly, the original Particular Baptists emerged from Independency, taking Congregational principles one step further to embrace believers' baptism. Despite often being painted with the same brush, Particular Baptists had little in common theologically with their European Anabaptist counterparts. They were resolutely Reformed in soteriology rather than Arminian. Treading the same path, I was converted in a Congregational Church and was a Paedobaptist before embracing Reformed Baptist convictions.

Anyway, besides Nehemiah Coxe, Renihan also gives detailed attention to the views of other Particular Baptists such as pioneers Andrew Ritor and John Spilsbury, and later writers, Philip Cary and Benjamin Keach, teasing out some of the nuances of their positions on the covenants and baptism.

The Particular Baptist divines of the Puritan period were fine theologians who demonstrated a clear grasp of the issues at stake as they engaged in polemics with Paedobaptists and sought to develop their own constructive theological proposals. Contemporary Reformed Baptists would do well to learn from the insights of their illustrious forebears.

As the debate on baptism rumbles on in our own day it can sometimes seem like our Presbyterian friends have the weight of theological argument on their side, while Baptists hurl back a few well-chosen proof texts. Renihan has demonstrated that the Particular Baptist position has a good pedigree within the Reformed family. Indeed, it could be advanced that the Baptist stance represents Reformed covenant theology in its purest and most consistent form.

Renihan's mastery of the primary sources is admirable as he takes in the sweep of Reformed thought from Calvin and Bullinger through to Coxe and Keach. Historical theology at its best retrieves the riches of past theological reflection to help the church understand the teaching of Holy Scripture more deeply and accurately in the present. Renihan's title is a great example of historical theology at its best. But there are still unanswered biblical and theological questions. Cameron, Owen and the Particular Baptists regarded the Sinai covenant as a covenant of works that was subservient to the covenant of grace. I agree that the Abrahamic and Mosaic covenants were not administrations of the covenant of grace, but does that mean the the old covenant was in fact a post-fall covenant of works? I'm not so sure. One for a future blog post, perhaps? [Two, actually on the Old covenant and the covenant of works and the covenant of grace respectively - GD].

Be that as it may, Samuel D. Renihan's highly informative and engaging work throws important light on one of the biggest questions in Christian theology. Namely, how are we to construe the relationship between the old and new covenants? As Paul taught, the old covenant had 'a shadow of the things to come, but the substance belongs to Christ' (Colossians 2:17). The Particular Baptist tradition enables us to see with clear vision that in Christ we have the substance of a better covenant, established on better promises.
Posted by Guy Davies at 8:00 am

Thanks for this helpful review. I read Coxe last year and got a bit tied up in knots. Maybe I should read this book and then try again.