The Buried Giant, by Kazuo Ishiguro 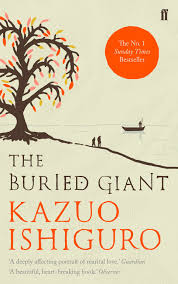 As a boy I was fascinated by the legend of King Arthur and the Knights of the Round Table. I re-read a version of story time and time again. The Buried Giant is set in the time that followed the great king's death. Arthur's nephew, the brave knight, Sir Gwain is still on the scene. The formerly warring tribes of Britons and Saxons are at peace.

The story focuses on elderly Britons,  Axl and Beatrice. The tenderly devoted husband and wife set out from their village on a quest to find their missing son.

In an unexpected genre twist for the novelist, Kazuo Ishiguro fuses [post] Arthurian legend and Lord of the Ringsy tales of ogres and dragons. It's an atmospheric blend, "Icy fogs hung over rivers and marshes, serving all too well the ogres that were then still  native to this land."


As well as icy fogs, a mist hangs over the land and people's memories are fading. The murky past is only recalled in brief snatches. Christians as they are, Axl and Beatrice worry that perhaps even God has forgotten.

They hook up with Wistan, a Saxon warrior and Edwin, the boy he rescued from ogres. The couple believe their son is now living in a Saxon village. The party stops at a monastery for the night, where all kinds of weird stuff happens. And a big fight.

While in the monastery Wistan protests he is offended at the Christian God of mercy. He much prefers the pagan alternatives who deal in justice. You get what you deserve. The idea of grace is indeed offensive. Why should people get what they don't deserve?

That is why some voices within the church have tried to tone down the scandal of grace by teaching that good works contribute to salvation. In The Buried Giant  the monks expose themselves to horrific suffering in an attempt to atone for the sins of the land.

Anyway, all is not as it seems. Wistan's mission to slay the dragon is at cross purposes with that of good old Sir Gwain. The fog of forgetfulness that hung over the land was there to blot out the remembrance of Arthur's atrocities against the Saxons.

The dragon's breath was the source of the the mist. In slaying the beast Wistan hopes to awaken a "buried giant" of revenge that will lead to renewed conflict between Britons and Saxons. Only then will justice be served.

But what effect will the receding mist and with it the recovered memory of past misdeeds have upon Axl and Beatrice's relationship? Their dearest wish was to be ferried to the island of the dead together, but for that to happen the ferryman must test the reality of their love.

We probably can all identify with the cry of the psalmist David to the Lord, 'Remember not the sins of my youth' (Psalm 25:7). More recent sins too. But what hope is there that our sins will be forgotten? Jeremiah prophesied that God would make a new covenant, under which the Lord promised, 'I will remember their sins no more'. (Jeremiah 31:34).

Not because a mist of forgetfulness had ascended to the high heavens, but because God descended in Jesus to die for our sins on the cross. By faith in him our sins are forgiven and forgotten. That's grace for you.

When it comes to Axl and Beatrice, as the book ends...
Posted by Guy Davies at 12:42 pm