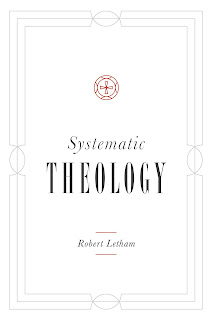 For many years Systematic Theology by Louis Berkhof was the standard text in the field of Reformed systematics. More recent publications were conspicuous by their absence. That is no longer the case. A welcome fruit of the resurgence of the Reformed faith in the mid 20th century has been the production of a number of fresh works of systematic theology in recent years. Among them are Robert L. Reymond's A New Systematic Theology of the Christian Faith and Michael Horton's The Christian Faith: A Systematic Theology for Pilgrims on the Way. Herman Bavinck's magisterial four volume Reformed Dogmatics  has also been published in English translation, but, as the title suggests they are works of dogmatic, rather than systematic theology.

The traditional approach of systematic theology as exemplified by Charles Hodge and Louis Berkhof has been called into question by Kevin J. Vanhoozer. In his The Drama of Doctrine: A Canonical Linguistic Approach to Christian Theology, Vanhoozer argued that doctrine should be reconfigured in terms of the great drama of redeeming grace. The purpose of doctrine is to enable the people of God to play their roles in the theodrama. Michael Horton takes this into account in his The Christian Faith, but Letham adopts a more traditional approach to systematic theology. While he acknowledges the insights to be had from speech-act theory 'theodrama' isn't the organising principle here.

Systematic theology is an attempt at setting out the key doctrines of the Christian faith in logical order as an interconnected whole. Logically speaking the doctrine of God is the most important of all, which is where Letham beings, rather than with the doctrine of Scripture. After discussing the Revelation of God, Letham devotes three chapters to the Trinity before giving attention to the divine attributes. The work as a whole is thoroughgoingly trinitarian. It is the one God who is Father, Son and Holy Spirit whose sovereign will is done in creation, providence and redemption.

Perhaps surprisingly the writer does not engage at length with the controversy over the eternal submission of the Son to the Father. He none the less makes it clear that while there is an order of persons in the Trinity, the divine will is a property of God’s being shared equally by the Father, Son and Holy Spirit. Talk of the Son eternally submitting his own will to the Father’s is therefore misplaced. Letham takes issue with the ‘Covenant of Redemption’ which he sees as having subordinationist overtones, preferring to speak of the Divine Counsel of the Trinity.

In line with his sovereign plan God created the material world and declared it very good. Letham helpfully underlines the value of value of the material realm throughout his work. This is affirmed in that the Son of God took human nature into union with his divine person at the incarnation. As the God-Man, Jesus came not just to save our souls, but to rescue the created order from sin and its effects. The believer looks forward to partaking of the divine nature at resurrection of the body, and the life of the world to come. The chapters on the incarnation are  models of biblical insight, compressed historical study and critical interaction with contemporary trends in Christology.

The work of Christ is discussed under the headings of his ministry as prophet, priest and king, although his prophetic work receives scant attention. The theologian gives full coverage to the different aspects of Christ's atoning work as our great high priest. Penal substitution and definite atonement are defended ably and biblically. Jesus' ascension into heaven and reign are discussed as attention is given to our Lord's kingly role. In common with many systematic theologies the resurrection of Jesus from the dead is not given the place it deserves in treating the saving work of Christ. As Richard B. Gaffin Jr argues in his Resurrection and Redemption: A Sudy in Paul's Soteriology, P&R, the resurrection of Jesus is central to the basic structure of Pau's doctrine of salvation. Although. to be fair, Letham's chapters on eschatology towards the end of the book make up for the lacuna here.

Over and against the individualistic tendencies of the West, the author discusses the application of salvation and the Christian life under the heading, ‘The Spirit of God and the People of God’, with a strong emphasis on the church. The various features of salvation are rooted in the believer’s union with Christ. The value of the Lord's Supper and Baptism are underlined. Having said that, Reformed Baptists will not find themselves in agreement with some aspects of the theologian’s treatment of baptism and church membership. Baptist understandings are sometimes airily dismissed rather given due consideration as a legitimate line of thought within the Reformed tradition.

The chapters in Part 8, 'The Ultimate Purposes of God' offer a magnificent vision of the Christian hope. Letham understands Romans 9-11 to teach that there will be a widespread turning to Christ on the part of Jewish people before the Lord returns. That will give a massive stimulus to world mission. A great multitude that no man can number will be saved from every tribe, tongue and nation. There is a sobering chapter Hell as a Place of Eternal Conscious Punishment, but the hope of the believer in terms of resurrection of the body and everlasting life in the new creation are to the fore.

Letham writes with clarity, precision and occasionally, humour. His handling of biblical materials is insightful. He traces the historical development of key doctrines in such a way as to cast fresh light on the Word of God. While irenic in tone and catholic spirited, Letham does not shy away from controversy, engaging amongst others with Karl Barth, proponents of feminist thought, and New Covenant Theologians.

The work is shot through with a spirit of devotion and doxology as the author directs the thoughts of his readers to our glorious triune God, his sovereign decrees and mighty acts. His Systematic Theology deserves to be the 'new Berkhof', but better. All we need now is a full work of contemporary systematic theology written from a Reformed Baptist standpoint. 'Who will go for us?'

* Reviewed for the Banner of Truth Magazine. A shorter version of this review can be found in the November edition.

Thanks for your review! Would you say this is a good first systematic theology book to read for a new Christian who wants to learn more about his faith? Others I was looking at are Wayne Grudem's Systematic Theology and John Frame's Systematic Theology or his shorter book Salvation Belongs To The Lord. Thanks!

It's very well written and clear, but is probably a bit ambitious for a new believer, unless you are going to read it with them so you can discuss it together. 'Salvation Belongs to the Lord' by Frame would be a good place to start. But, like Letham's work it's written from a Presbyterian rather than Reformed Baptist perspective.