New Studies in Dogmatics: The Triune God, by Fred Sanders 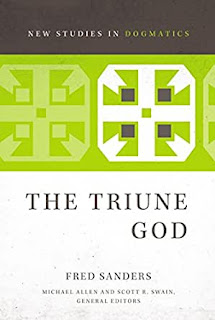 Zondervan, 2016, Kindle edition, 243pp
In many treatments of the doctrine of the Trinity the theologian's basic approach is to attempt to bring together the scattered bits and pieces of the Bible's teaching into a coherent whole. Something like assembling a jigsaw puzzle. The theologian will often begin by identifying Trinitarian hints in the Old Testament and then give attention to some of the key passages in New Testament Scripture.
Fred Sanders proposes and alternative approach. He argues that God is revealed as three persons primarily in the redemptive historical missions of the Son and the Holy Spirit. The role of Scripture is to bear witness to and interpret those missions for us. Contrary to 'Rahner's rule' Sanders is not saying that the economic Trinity we encounter in the missions is the ontological Trinity. Rather, that the eternal processions within God are disclosed in the economic missions of the Son and Holy Spirit .
The Son is eternally begotten of the Father. The Holy Spirit proceeds from the Father and the Son. The Son and the Spirit are fully God, of the same divine essence as the Father. Given the eternal relations of origin, it was fitting that the Son should be sent into the world by the Father in order to save us from sin and that the Holy Spirit was poured out from the Father by the Son on the Day of Pentecost to give us new life.
Hence the church confesses its belief in one God in three persons. But according to Sanders we can say no more of what it means to be a divine 'person' than that the Three have distinct eternal relations of origin. The Father in his person is unbegotten, the Son is begotten of the Father and the Holy Spirit proceeds from the Father and the Son. We certainly should not suffuse the personhood with any notion that the Three are separate centres of self-consciousness, each with their own distinct will, who happen to cooperate together for certain ends. Any such account shatters the simplicity of God and veers in the direction of Tritheism.
We need to tread carefully when it comes to defining what is meant by 'persons' and not lapse into social trinitarianism. But we should also factor in the way Scripture enables us to eavesdrop on communications between the persons of the Trinity, where the Father affirms his love for the Son (Matthew 3:17) and the Son expresses his love for the Father (John 14:31). God's love in Christ is poured into the hearts of his people through the Holy Spirit (Romans 5:5). The missions reveal the mutual love between the persons of the Trinity from eternity. The only begotten Son of the Father is the beloved Son of the Father. This has implications for our understanding of how as persons the Three relate to each other in loving communicative action. Certainly 'person' is to be preferred to some of the other alternatives such as 'mode of subsistence'. As Robert Leatham affirms, "Since God is personal, he is love, the living God, for life and love go together.' (Systematic Theology, Crossway, 2019, 9. 128). Louis Berkhof adds further clarity when he says, 'but [we] should not... lose sight of the fact that the self-distinctions in the Divine Being imply an “I” and “Thou” and “He,” in the Being of God, which assume personal relations to one another.' (Systematic Theology, Biblical Training.org edition, p. 95).

While Sanders' treatment is enriched by the theological reflection of the church, he is keen to underline that, "Trinitarianism is a gift of revelation before it is an achievement of the church." (p. 23). Biblical exegesis is therefore the key factor on constructing a doctrine of the Trinity. But this does not mean exegesis of individual texts in glorious isolation. Biblical revelation as a whole is Trinitarian in character. The Old Testament sets the scene for the missions of the Son and the Holy Spirit. The New Testament bears its witness to their coming into the world for our salvation. Individual texts need to be seen in that light.  This overall approach has has the advantage of rescuing Trinitarian theology from the 'jigsaw puzzle' method.

Giving attention to the biblical materials, the author discusses 'New Covenant Attestation' to the Trinity, focusing on 'The Trinitarian Life of Jesus', 'Epiphany at the Jordan', 'The Threefold Name' and 'Paul and the Presupposition of Salvation'. He then discusses 'Old Covenant Adumbration'. Sanders is not happy to label manifestations of God in the Old Testament as 'christophanies'. Evangelicals have sometimes used that label on the basis that it is the Son's nature to be visible in a way that the Father is not, which is a contradiction of 'homoousios', that the Son has the same essence as the Father. Also, the idea that it was always the Son who put in a temporary appearance in Old Testament narratives deprives the eventual enfleshment of Jesus of its uniqueness. Better to say with Augustine that the theophanies represent, “simply the one and only God, that is the Trinity without any distinction of persons.” (p. 225). In the New Testament Isaiah's vision of the Lord seated upon the throne is predicated of both the Son (John 12:40-41) and the Father (Revelation 4:2, 8 cp. Isaiah 6:3).

That is not to say that we cannot glimpse distinct revelations of the three persons in the pages of the Old Testament. Sanders commends the Fathers' 'retrospective prosoponic (personal)' reading of Old Testament Scripture. The author cites the examples from the writings of of Gerhohus the Great (1093–1169),

Evangelicals have got themselves into something of a muddle on the doctrine of the Trinity of late. A narrowly biblicist approach has led to denials of eternal generation. Some have posited that the Son's will is eternally subordinate to that of the Father, attributing will to the persons of the Trinity rather than the divine nature. Sanders' approach provides a necessary corrective to these harmful tendencies. In an online article Adding Eternal Generation the theologian engages with Wayne Grudem's handling of the doctrine of the Trinity in the second edition of his Systematic Theology.

Evangelicals are by definition people of the Evangel. That is why we need to get the doctrine of the Trinity right. The revelation of the Trinity is umbilically joined to revelation of the mystery of the gospel. For in the gospel is nothing less than the good news that the Father has sent the Son to be the Saviour of the World and to raise up ruined humanity by the power of his Spirit. In the words of the Second London Baptist Confession, 1689 "which doctrine of the Trinity is the foundation of all our communion with God, and comfortable dependence on Him." (2:2). Sanders' study demands careful thought as he develops his argument and interacts with a range of other scholars, but the work is no way dryly academic. As he points out, to contemplate the Trinity is to seek the face of God and tune one's mind to doxology: