On the divine persons: a Shedd-load of Trinitarian theology 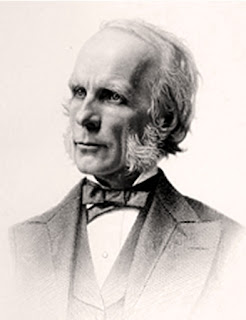 W. G. T. Shedd (1820-1894) devotes a lengthy chapter in Dogmatic Theology Volume I  to Trinity in Unity. It's not my purpose to sketch out his teaching as a whole. Rather, I want to draw attention to his remarkable treatment of the relationship between the single divine essence and the three persons of the Trinity.
The theologian takes the simplicity of God's essence for granted and denies that the essence is in any way 'chunked-up' (my words) between the Father, Son and Holy Spirit. Rather, "this undivided essence is common to three persons" (p. 268). Further, "The Father, Son, and Holy Spirit are each and simultaneously the whole divine essence; so that while there are three persons, there is but one essence." (p. 275). Shedd admits, however, "that we have no adequate idea of what is meant be person when applied to God and use it only because distinct personal attributes and actions are ascribed to the Father, Son, and Holy Spirit in Scripture". (p. 268).
These "personal attributes and actions" are the eternal relations of origin within God, namely, "That immanent and necessary activity within divine essence whereby the Father begets the Son, and the Father and the Son spirate the Spirit, makes it to be self-contemplating, self-knowing, and self-communing." (p. 272). The divine persons are not interchangeable. The Father only is unbegotten, the Son alone is begotten of the Father, the Holy Spirit uniquely proceeds from the Father and the Son. But it is simply in terms of the eternal relations of origin that we may distinguish the persons. In essence they are one,

The whole undivided divine nature is in each divine person simultaneously and eternally. The modifying of divine nature by eternal generation and spiration does not divide the nature, as temporal generation does, but leaves it whole and entire, so that the substance of the begotten Son and the spirated Spirit is numerically and identically that of the unbegotten and unspirated Father. (p. 278).

Shedd then proceeds to discuss how the three persons relate each to the others. I quote him at length,

Revelation clearly teaches that these personal characteristics are so marked and peculiar that the three divine persons are objective to each other. God the Father and God the Son are so distinct from each other that some actions which can be ascribed to the one cannot be ascribed to the other. The Father "sends" the Son; this act of sending the Son cannot be attributed to the Son. The Father "loves" the Son; this act of loving the Son cannot be ascribed to the Son. An examination of the Scriptures gives the following series of twelve actions and relations of the three trinitarian persons, which prove that they are objective to one another, that one may do or experience something that is personal to himself and is not personal to the others. One divine person … loves another (John 3:35) dwells in another (John 14:10–11) suffers from another (Zech. 13:7) knows another (Matt. 11:27) addresses another (Heb. 1:8) is the way to another (John 14:6) speaks of another (Luke 3:22) glorifies another (John 17:5) confers with another (Gen. 1:26; 11:7) plans with another (Isa. 9:6) sends another (Gen. 16:7; John 14:26) rewards another (Phil. 2:5–11; Heb. 2:9) Here are twelve different actions and relations which demonstrate that the Father, Son, and Holy Spirit are not one and the same person. (p. 279).

Shedd's handling of the doctrine of the Trinity has relevance for debates within Evangelicalism on the Eternal Relational Submission (ERS) of the Son to the Father. Advocates of ERS sometimes argue that classic Trinitarianism fails to do justice to divine personhood, having little to say beyond the eternal relations of origin. As Shedd makes clear, however, Father, Son and Holy Spirit each stand in an "I"-"Thou" relation to the others. But that does not mean we should attribute an individual will to each person, or posit that each is a distinct centre of self-consciousness. As Shedd rightly underlines, will is an attribute of the divine being and there is only one self-consciousness in God. The theologian's distinction between the personal consciousness of the Father, Son and Holy Spirit and the singular divine self-consciousness is a useful safeguard against social Trinitarianism. "The three hypostatical [personal] consciousnesses in their combination and unity constitute the one self-consciousness." (p. 283).

You never know what useful stuff may be found lying around in the Shedd. I may rummage around a little more.

Quotations from Dogmatic Theology Volume I, Klock & Klock 1979 reprint. You can also find a e-copy online, but the pagination is different, here. See p. 5 of the PDF for clickable contents.