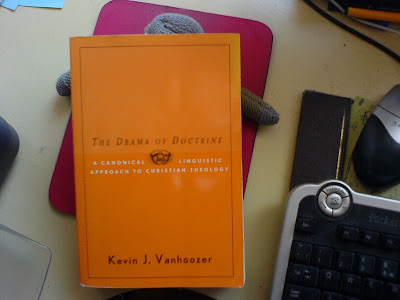 Something terrible has happened. My pet theological monkey, "David Sky" asked if he could borrow a book. I said, "Help yourself. Reading should keep you quiet for a bit." He was trying to get hold of John Calvin's Ideas by Paul Helm, when disaster struck. Kevin Vanhoozer's The Drama of Doctrine caught his eye, "It's just so orange!" said the monkey. He reached for the mighty tome, lost his footing and the book landed right on top of him. "Help!" He cried, "I'm being crushed by The Drama of Doctrine!" I rushed to the scene, took the photo you can see above and then gently lifted the book. Luckily, it wasn't damaged. But the monkey was left dazed, confused and badly bruised. I don't know if he'll ever be able to blog again.
The strange thing is, that since being walloped by the D of D, he has been talking kind of weird. Instead of saying, "Let's have a chat over a cup of tea.", he'll say "Let's do some speech acts over a receptacle of postlactarian tea-leaf-based beverage." It's kind of freaking me out and I don't know what to do about it. I've tried nouthetic counseling, but he just says, "Don't get stroppy with me. It's not my fault I got compressed by your book." Oh dear! This event has pushed me beyond the limits of my pastoral training and experience. They simply don't prepare you for things like this at the London Theological Seminary.
Posted by Guy Davies at 11:30 am

"I'm being crushed by The Drama of Doctrine!"

Your pet theological monkey isn't the only one who has suffered this fate...

If your monkey has a tendency to reach up for orange books, then I sure hope you haven't got any volumes of Church Dogmatics lying around -- those suckers could kill an entire gorilla, to say nothing of fragile little tea-drinking monkeys....

It's a good job that I'm not a Barthian. I'd fear for the life of my kids, let alone the monkey if I had those things on my shelves.

I do hope that your non-prosimian long tailed primate (monkey) will soon recover from his event without apparent cause (accident).

Has a copy of The Drama of Doctrine landed on your head recently? You seem to have got a bad case of Vanhoozeritus.

The prognosis for the monkey is reasonably hopeful.

Clearly the chimp is reaping what he sewed in referring to me as "stroppy bearded."

Well, he can be a bit of a cheeky monkey. But he's feeling a little subdued at the moment. It's a good job that you are a non-violent sort, or you might have tracked him down and throttled him.