Why I'm a Baptist 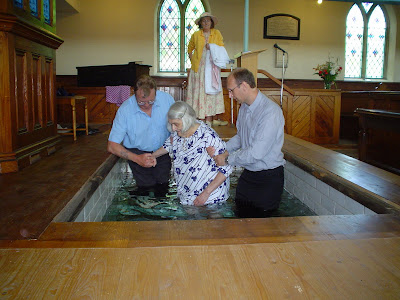 Charles Haddon Spurgeon began his Christian life as a Congregationalist who believed in infant baptism. But soon after his conversion, he embraced Baptist views. His Congregationalist parents were a little disappointed in Charles’ decision to seek baptism. But they gave him permission to follow his conscience. His mother wrote,

“Ah, Charles, I often prayed to the Lord to make you a Christian, but I never asked that
you might become a Baptist”.

The dutiful son replied with a note of typical Spurgeonic wit,

“Ah, Mother, the Lord has answered your prayer with his usual bounty, and has given you exceedingly abundantly above all you asked or thought”.

I began my Christian life as a rather charismatic Congregationalist. I quickly became disillusioned with charismatic experiences as it became obvious to me that my “speaking in tongues” was just me blurting out incomprehensible nonsense. I needed something that would give my new Christian life depth and stability and I found this in the riches of Reformed theology. In Puritan and Reformed teaching, I discovered a convincingly Biblical theology that was married to an emphasis on true experiential Christianity. Here I found head and heart united to glorify God and enjoy him forever.

The transition from Charismatic to Calvinist was accomplished in a brief period of time. But it took some years for me to change from being a paedobaptist Congregationalist to a Baptist. As a young Christian I learned that the great Congregationalist divines like John Owen and Thomas Goodwin were infant-baptists, as were the Reformers and the early Church Fathers. Their argument seemed pretty convincing; baptism has replaced circumcision as the sign and seal of the covenant. As (male) children were circumcised under the old covenant, so children of believers should be baptised under the new. This view was based on a semblance of Biblical theology and backed up by many of my theological heroes. How could it be wrong? Besides, I was just a little fed up with Baptist friends telling me that I needed to be baptised. As far as I was concerned I was baptised – as an infant and that was that.

But the more I thought about the matter, it became clear to me that infant baptism is neither implied by the Old Testament nor taught in the New. Reformed Baptists are committed to applying the principle of Sola Scriptura to the matter of baptism. Put quite simply, the practice of infant baptism is not found in the Bible, so we don't believe in it. It won't do to suggest that it can be deduced from Scripture by just and necessary consequence either. If paedobaptism is entirely absent from Scripture, then no amount of deductive reasoning will make it valid. We honour the Reformers and Puritans, but, on this issue, they were mistaken. This reminds us that our heroes have feet of clay. Tradition is to be valued, but the Bible alone is our authority. "Repent, and let every one of you be baptised" (Acts 2:38), "when they believed Philip as he preached the things concerning the kingdom of God and the name of Jesus Christ, both men and women were baptised." (Acts 8:12). In the New Testament, water baptism always follows repentance and faith.
There is a danger when a person changes his views that he sets himself against those with whom he formerly agreed. But I still hold to Congregationalist views of Church government and have deep respect for infant-baptist Christians. There are aspects of the Reformed Baptist tradition that I am not entirely happy with. The movement has sometimes veered away from Evangelical Calvinism into Hyper-Calvinism and even antinomianism. Some Reformed Baptist Churches will not allow infant-baptist Christians to join them at the Lord’s Table. To me that is uncharitable and sectarian. But, I think that the Reformed Baptist position, as set forth in the 1689 Baptist Confession is essentially Biblical Christianity.
Posted by Guy Davies at 9:22 am

Email ThisBlogThis!Share to TwitterShare to FacebookShare to Pinterest
Labels: Baptists

Thanks for this narrative and reflection. Parts echo my own journey; parts don't! (Suprise!)

As a "credo-baptist", I sometimes struggle to appreciate the paedo-baptist perspective. Recently ran across a couple brief pieces by David F. Wright which I found helpful, though. One addresses the origins of infant baptism; the other looks at "habitats" of infant baptism. Maybe you know them already? It's an interesting site, from the look of it.

Interesting arguement in there about who the children of the covenant are in Hebrews ("I will write my law upoon their hearts").

No I hadn't seen those artciles, but I have now. Thanks.

I know of Erroll Hulse, but haven't read his book.

Me, I was raised United Methodist, converted (in regard to human agents) by black Baptists and black Pentecostals, and came to embrace believers baptism and gospel nonviolence through the witness of a German Baptist congregation in Heidelberg. (I was stationed in Heidelberg serving the U.S. Army and had to leave as a conscientious objector.) My mother made similar comments to Spurgeon's mother.
My reply was similar, too. And one day, Guy, I trust that God will show you the truth of pacifism, as well. It fits so well with believers baptism, etc.

Taking a walk out into the woods to the place where 17th C Baptists met for meetings in the persecutions stirred up thoughts about the costliness of theological reformation. On the one hand I was thankful for the opposition because I think such journeys should not be undertaken lightly given the inherant dangers of error and heresy, but on the other hand when 'light' comes, standing for what you believe concentrates the character, there was a tangible sense of excitement about stepping out into a closer walk with God.

Hello everyone,
I found your site moments ago and have found it to be encouraging. I am an Independent Fundamental Baptist from Texas, USA. I pastor a congregation of about 50. I believe very strongly on core issues of faith and practice. Our liberties are under attack here as I'm sure yours are there. Please pray for our government. Our leaders here care nothing for the Bible and act callously and try to pass it off as being the hand of God. Jesus never said, blessed are the warmongers. I am an admirer of Spurgeon and the Wesleys, also of Whitfield. Have you ever heard of Curtis Hutson or his son Tony Hutson? Look them up online. I would also suggest Dr. Jack Hyles, who was also a great admirer of Spurgeon's. God bless you pastors, missionaries and evangelists. We shall soon stand before the bar. Be faithful. Quit ye like men!

If you follow the pretended justifications for paedo-baptism the case presented can be seen essentially as Judaizing, i.e. the continuation of ceremonial laws (but inconsistent, by applying it also to females somehow).

Even Calvin and many of the reformers in their writings admit and confess that the word baptism, and the practice of the early church, was that of immersion in water instead of sprinkling, and upon confession of sins, which an infant is incapable of.

Second, if the apostle Paul commanded the re-baptism (anabaptism, literally) of those already falsley baptized under an unlearned Apollos (because they had no mental cognition, like a child, of Jesus as the Christ), how does that not entirely dispel and establish the precedent for adult baptism only? To be consistent with Paul and the holy spirit in Acts, paedobaptist must admit that cognitive conviction of Jesus as Christ is a requirement, and that infant baptism must be followed by adult baptism, to retain biblical authority.

The "tradition" of the Roman church and paedobaptism and sprinkling, can be traced by both A. Hislop and the Deist Thomas Paine to the practices of pagans (Babylonian Mystery Religion) and Druids, as a superstitious ritual, which Roman Catholicism always "christens" or Christianizes.

Paedobaptism is thus unbiblical, Judaizing, and a pagan "tradition of men", contrary to new testament commandment and example.

If you would like the truth regarding the "Roman Church," visit www.chnetwork.org.