Pelagius is the worst heretic 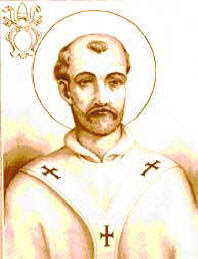 Poll result in full:
Pelagius 30%
The Pope 28%
Arius 14%
Marcion 14%
Schleiermacher 11%
Cerinthius 2%
See below for B.B. Warfield's summary of the Pelagian controversy
At this point we have touched the central and formative principle of Pelagianism. It lies in the assumption of the plenary ability of man; his ability to do all that righteousness can demand — to work out not only his own salvation, but also his own perfection. This is the core of the whole theory; and all the other postulates not only depend upon it, but arise out of it. Both chronologically and logically this is the root of the system.
The theology which Augustine opposed, in his anti-Pelagian writings, to the errors of Pelagianism, is, shortly, the theology of grace. Its roots were planted deeply in his own experience, and in the teachings of Scripture, especially of that apostle whom he delights to call 'the great preacher of grace,' and to follow whom, in his measure, was his greatest desire. The grace of God in Jesus Christ, conveyed to us by the Holy Spirit and evidenced by the love that He sheds abroad in our hearts, is the centre around which this whole side of His system revolves, and the germ out of which it grows. He was the more able to make it thus central because of the harmony of this view of salvation with the general principle of his whole theology, which was theocentric and revolved around his conception of God as the immanent and vital spirit in whom all things live and move and have their being. In like manner, God is the absolute good, and all good is either Himself or from Him; and only as God makes us good, are we able to do anything good.
See here for Warfield's articles on Augustine and Pelagius.
Posted by Guy Davies at 12:24 pm

Truth is never decided by vote. As bad as Pelagius was, Marcion was worse--and his influence is still with us.

Of course truth is not decided by vote, even the votes of the wise and discerning readers of this blog. But neither is truth decided on the basis of your personal opinion.

Having said that, Marcion's teaching is still apparent today. I find that some Christian pacifist teaching has Marcionite overtones. The Lord of hosts, "mighty in battle" is the God and Father of our Lord Jesus Christ.

How is Schleiermacher a heretic? He affirmed all of the Ecumenical Councils as does the Pope... Do you people even know what the definition of a heretic is?

Calm down, Jon. This is the result of a blog poll, not the decree of an ecumenical council. Don't you even realise that?

Believe it or not, I agree that SOME pacifists have Marcionite leanings and have worked to correct that. However, since Just War Theorists don't deal very well with the OT massacres (which violate JWT rules) either, I don't see this form of Marcionism as more of an issue for pacifists than non-pacifist Christians. The question of how to relate the two testaments BEGINS with the rejection of Marcion, but is not therefore easily settled.

And Marcion is still worse than Pelagius.

Oh, and in Jon's defense, I also objected to Schleiermacher making the list and should have asked "which pope?"

It would help to begin with a definition of heresy. I would say that it is any teaching that so distorts the nature of God or God's redeeming work in the world that it makes it difficult or impossible for one holding that false teaching to properly hear and respond to the gospel. Thus, as one of my teachers was fond of saying, all heresies are, at bottom, trinitarian heresies.

I would agree with your definition of heresy. Heretical teaching denies or distorts fundamental gospel truth. I think that on the original post that accompanied the poll I asked which heretic had done most damage to the gospel. I also set out very briefly the key ideas associated with the poll of "heretics".

Jon seems to be suggesting that a heretic is simply a person whose teaching contradicts the main ecumenical councils. I agree that such people are heretics. But that is too limited a definition of heresy. The denial of justification by grace alone, through faith alone is also a heretical if Galatians 1 is anything to go by. The creeds help us to define heresy, but the ultimate arbiter of truth and error must be the biblical gospel.

The whole point of blog polls (at least as far as I'm concerned) is not to settle theological disputes once and for all, but to generate discussion. What matters if anything is not so much the votes as the reasons that people give for their decision.

If the poll's result leads to a discussion of the nature of heresy, then hopefully that's not a bad thing.

Although Pelagius is an admirable winner, I am sad to see that Arius has neither provoked further conversation nor received the award. He still has my vote as the heretic that 1) has had the longest lingering impact on the Church 2) was the closest to ecclesial victory. One could even argue that Arius started the entire council process and thus was the heretic of all heretics!

I have some sympathy with your comments, Joshua. A good case could be made out for Arius as the worst heretic of them all. If Christ is not fully God, he cannot be the final revelation of God or save us from sin.

The term heretic describes individuals who dissented from the beliefs or practices of the controlling Christian religious authorities. This is different from the non-believer such as the Jew or Muslim who operated outside the Christian faith.

Once the church split in 1054 the word heretic fell out of parlance. I'm not saying that people can't be wrong about the teaching of the Bible but such people aren't heretics. I just crave accurate definitions.

People who now make statements about the Bible which are wrong are not heretics - they're just wrong. Why does it matter? Because language is controlled by the communities that use them and the evangelicals use the term heretic too loosely.

Schleiermacher was a genius. I don't agree with much of what he says but this doesn't stop him from being a passionate seeker of the truth.

Fair enough, Jon. But I don't agree with your limited definition of "heresy". Historically it often had a broader meaning than you suggest. For example, did not the Roman Catholic Church brand Protestants and heretics and visa versa? I think that it is better to define heresy as denial or distortion of essential gospel truth.

Having said that, maybe evangelicals have sometimes been too quick to label a person a "heretic" without due casue.

soteriology depends on christology! another reason arius deserves our vote over pelagius.

Fine... But I'm going to start referring to you as a Universalist... because definitions don't mean anything...

As for you Jon, I didn't say that definitions don't matter. Can't you see that I simply think that your very narrow definition is wrong?

Historically, the term "heretic" did not fall out of use from 1054, only to be revived by pesky heresy huntin' evangelicals. The Confession of Aubsburg (1530) declares "We are not heretics". The word was being bandied about a lot at the time. The 16th century Protestant martyrs were burned at the stake as "heretics" under English laws that were brought back into force to exterminate Lollardy.

In terms of the Reformation, the argument over what constitutes "heresy" was not over the truths expressed in the historic creeds, but justification by faith alone etc.

My contention is that we should not define heresy simply in terms of historical theology. My definition would be: Error that denies or distorts the essential truths of the biblical gospel.

Anyway, if you call me a Universalist, I'll call you a Calvinist!

I don't mind being called a Calvinist

I was being ironic, Jon.

Anonymous said...
This comment has been removed by the author.
2:34 am

You need to read Pelagius' commentary on Romans for yourself and see if you still believe the standard accusations made against him. Pelagius's Commentary on St Paul's Epistle to the Romans (Amazon.com)