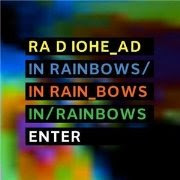 I've never really been into Radiohead. It's not that I actively disliked their music, they just seemed to have passed me by. I don't know why. But when I saw that they were operating an innovative "pay-what-you-like" policy for downloading their new album, I thought that this might be a good time to give them a hearing. For the record, I found that you have to play at least £1.00, and I was charged a 0.45p "handling fee". I suppose £1.45 isn't too much to pay for a top band's latest offering.
My impressions? I didn't know what to expect from Radiohead apart from the fact that they have a reputation for being a bit experimental and left-field. At first play I didn't quite know what to make of it and I was glad that I'd paid so little for the album. The techno-ambient sound and drum machine driven beat featured on many of the tracks, together with Thom Yorke's high-pitched, whiny vocals left me feeling a little bewildered. On second listen, I found myself being drawn in to the richly textured songs. I liked the gentle guitar parts and the satisfyingly heavy bass that comes to the fore in songs like 15 Step and Nude. The distorted, rocked-up style of Bodystachers appealed to my indy sensibility. I enjoyed the quirkiness of Weird Fishes-Arpeggi. But I only really began to appreciate In Rainbows when driving to Devon last Friday evening. The subtle atmospherics of the songs made them an ideal soundtrack for night-time driving. To my surprise I found that I like Radiohead, even at their most adventurous. One thing I still don't get is the overuse of drum machines on several tracks. This makes for a rather monotonous rhythm that lacks the variation and humanity of "proper drumming". But with ten brilliantly unusual songs for £1.45, I can't really complain too much. The album closes with the entrancingly haunting beauty of Videotape.
Maybe Radiohead's "pay-what-you-like" policy is really a cunning ploy to get penny-pinching Johnny-come-latelys like me to invest in their back catalogue? If so, it worked. OK Computer is on its way. In Rainbows is a sonically engaging, high-tech "sprat to catch a mackerel".
Posted by Guy Davies at 10:33 pm

Did the exiled preacher really just post a review of In Rainbows?...

Anyway, it's a good album but OK Computer is by far the best. The last album they did before they went completely 'experimental'. Maybe you'll post a short review on that too?

No, I didn't. Michael Jensen must have hacked into my blog and posted it.

I understand Okay Computer was voted by Channel 4 viewers as best album of all time. That, another CD for just £1.45, your review, the knowledge that yards from where I sit lie copies of their stuff (in my son's room) and still I can't be bothered. Human psychology is fascinating.

Exiled Preacher - just stumbled on your blog and really like it. I recently downloaded In Rainbows but haven't had time to listen to it yet, but I will say that OK Computer and The Bends are extraordinarily good. "Paranoid Android" alone is worth the price of the record.

Thanks for the blog!

Thanks for your comments re the blog. Yes, I'm enjoying OK Computer. Paranoid Android is one amazing song. What have I been missing all these years? The Bends and some other stuff is on the way.