Why the Reformation Matters (2)

Why the Reformation really matters 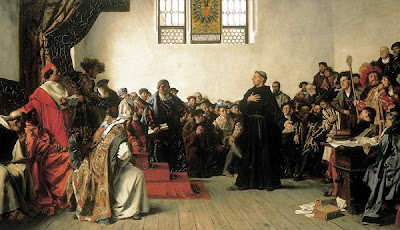 Luther at the Diet of Worms, "Here I stand!"
1) The authority of Scripture Matters

In 1521, at the Diet or Worms, Luther faced immense pressure to back down and stop his outspoken criticism of the Roman Catholic Church. He refused saying,

"Unless I am convinced by Scripture and plain reason - I do not accept the authority of popes or councils, for they have contradicted each other - my conscience is bound by the Word of God. I cannot and will not recant anything, for to go against conscience is neither right not safe. God help me. Amen. Here I stand, I cannot do otherwise!"

This matters. We stand apart from Rome because we believe that the Bible alone is our authority. We cannot go down the road of theological liberalism because be believe that the Bible must stand in judgement over contemporary thinking and not the other way round. The Bible is clear. By the help of the Holy Spirit we can understand its essential message of saving truth. We insist on the right of every believer to read and interpret Scripture. But this must not collapse into postmodern subjectivity where every view is as good as another. The Bible must be handled responsibly and faithfully. We stand by the ancient creeds and confessions as embodiments of the message of the Bible rightly interpreted. In our postmodern world, authority is viewed with suspicion as a manipulative exercise in power and control. But we must place ourselves under the authority of the Word of God. We can do no other. “All Scripture is breathed out by God and profitable for teaching, for reproof, for correction, and for training in righteousness, that the man of God may be competent, equipped for every good work”. (2 Tim 3:16.)

2) The Centrality of Christ Matters

The Reformation placed Christ centre-stage, which is where he belongs in the drama of redemption – not waiting in the wings for the church to get out of the way, but at the centre of all we do and say. We must proclaim him, his Person, his atoning death and bodily resurrection, his ascension and reign as King of kings and Lord of lords. It is in him that sinners are justified, sanctified and glorified.

One sure-fire characteristic of evangelicalism was that Christ’s died as our substitute, bearing the penalty of our sin. The Father so loved the world that he sent his Son to save lost human beings. Christ lovingly died in the place of his people as their substitute. By his death, he paid the penalty for sin and turned God’s wrath away from sinners.

In this is love, not that we loved God, but that He loved us and sent His Son to be the propitiation for our sins. (1 John 4:10)

This was at the heart of the apostles preaching,

We preach Christ alone! Not Christ of Rome who needs his mother to help him save, or the emptied out Christ of Liberalism, shorn of his divine glory, or the trendy postmodern Jesus of the Emerging Church, but the gritty, controversial Jesus of the Bible who says, "I am the way, and the truth, and the life. No one comes to the Father except through me”. (John 14:6.)

3) Being Right with God Matters

Our world is very different from the 16th Century. But some issues refuse to go away. One of these is how can a sinner be right with a holy God. What brought the Reformation to birth was Luther’s rediscovery of justification by faith alone.

Martin Luther tried as hard as he could to save himself as a devout monk. But he despaired of finding salvation by works. He came to understand that justification – a right standing before God was obtainable by faith alone.

"Night and day I pondered until I saw the connection between the righteousness of God and the statement ‘the just shall live by faith’ (Romans 1:17). Then I grasped that the righteousness of God is that righteousness by which though grace and sheer mercy God justifies us through faith. Thereupon I felt myself to be reborn and to have gone through open doors into paradise. The whole of Scripture took on new meaning, and whereas before ‘the righteousness of God’ had filled me with hate, not it became inexpressibly sweet in greater love. This passage of Paul became to me a gate to heaven."

We must hold to this against Rome, which brings works into justification. According to Roman Catholic teaching, we are justified by God’s grace at baptism. But we must supplement our justification by works. If we add our works to justification, then we can never be sure that we have done enough to make ourselves acceptable to God. Justification by faith alone has long been one of the defining doctrines of biblical Protestantism. This is the basis of our assurance,

Who shall bring a charge against God’s elect? It is God who justifies. Who is he who condemns? It is Christ who died, and furthermore is also risen, who is even at the right hand of God, who also makes intercession for us. (Romans 8:33 & 34).

We must also aware of the so-called New Perspective on Paul. This view, associated with N.T. Wright among others sees justification not so much as a declaration that we are righteous in Christ, but that faith is a badge that shows that we are members of the church. The NPP is very useful to the ecumenical agenda because it undercuts the old divisions between Rome and Protestantism. All sides confess Jesus as the risen Lord, all therefore have the “badge” of faith and are consequently members of the people of God. But NPP is a distortion of the Scriptural teaching. It leaves unresolved the age old question, “How can I be right with God?” This is Paul’s answer: “yet we know that a person is not justified by works of the law but through faith in Jesus Christ, so we also have believed in Christ Jesus, in order to be justified by faith in Christ and not by works of the law, because by works of the law no one will be justified”. (Galatians 2:16.) Here is the Protestant and I would argue biblical definition of justification, set forth in the Westminster Shorter Catechism,

Justification is an act of God’s free grace, wherein he pardons all our sins, and accepts us as righteous in His sight, only for the righteousness of Christ imputed to us, and received by faith alone. (Q. 97)

4) The Doctrine of the Church Matters

The Reformation was not simply all about lonely individuals “taking their stand”. The Reformers were passionately interested in church life. They reformed structure and worship of the churches in accordance with Biblical teaching. A true church was defined by gospel doctrine, the right administration of the sacraments and loving discipline of the membership. The biblical doctrine of the priesthood of all believers was rediscovered. Church members were to be born again people, visible saints, who exercised their gifts for the good of the body of Christ. The Reformation gave emphasis to the preaching of the Word as the means by which sinners are saved and the people of God built up as a kingdom of priests.

5) The Glory of God Matters

“What is the chief and of man?” asks the first question of the Westminster Shorter Catechism. The answer is, of course, “Man’s chief end is to glorify God and enjoy him for ever.” So speaks the authentic voice of Biblical Protestantism. We are to live with an eye to the glory of God. He has saved us not for our sake, but for his. God has chosen us to be his people, sent his Son to die for us, adopted us unto his family and given us eternal life. Why? “to the praise of his glory.” (Ephesians 1:14).

We glorify God when we are God-centred rather than “me and my needs centred”. Calvin’s greatest work is his Institutes of the Christian Religion. In the Institutes, he argues that the first principle of the Christian life is self-denial,

Let this, then, be the first step, to abandon ourselves and devote the whole energy of our minds to the service of God. (III: VII: 1)

We are no to seek our own, but the Lord’s will, and act with a view to promote his glory. (III: VII: 2)
What could be more healthy for the church than this deeply biblical, God-centred theology? Do you still doubt that the Reformation matters?
This post is based on an address given to a men's breakfast. Click on "The Reformation" label below for the rest of the series.
Posted by Guy Davies at 12:45 pm

Great post. Thanks. I just found your blog today. I'll be back!