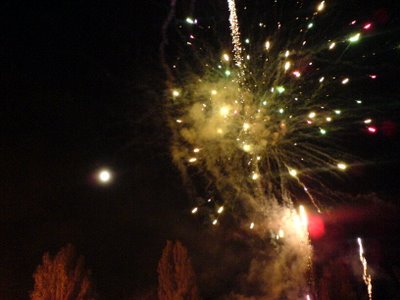 This evening's Fireworks Display; Westbury, Wiltshire
Remember, remember
The fifth of November
Gunpowder, Treason and Plot.
Yes, it's that time again when communities in the UK gather around bonfires and ooh and aah at the sights and sounds of fireworks displays. But behind the annual ritual of "Guy Fawkes Night" lies a foiled act of faith-motivated terror. Roman Catholic conspirators plotted to blow up Parliament: the King, the Lords, MP's and all. Their hope was that this would destabilise Protestant Britain and lead to the return of Catholic power in the country. It is a little ironic that the Pope's recent comments on the unreasonableness of violence in the name of religion were themselves the cause of faith-inspired violence.

The toxic alliance of faith and terrorism on 5th November 1605 has a strangely contemporary ring to it in the wake of 9/11 and 7/7. Now might be a good time to reflect on the link between religion and violence. One thing that puts many off religion is that people have often gone to war in the name of their faith. I write not as a defender of faith in general, but as a Christian. Honesty compels me to admit that Christians have sometimes used violence and conflict to further their ends. This is most regrettable. The New Testament clearly forbids Christians to use force to defend or spread the faith. When on trial before Pontius Pilate, the Roman Governor of Judea, Jesus said, "My kingdom is not of this world. If my kingdom were of this world, my servants would fight, so that I should not be delivered to the Jews, but now my kingdom is not from here." (John 18:36.) Jesus' kingdom was to be established by his death on the cross for sinners, not by his followers fighting to defend him.

Because Jesus' kingdom is not of this world, it cannot be extended by the weapons of this world like bombs and bullets. The State may use force to protect its citizens. But the Church must use the spiritual weaponry of prayer, preaching and practical Christian love to further the cause of Christ. People can only enter the unworldly kingdom of Jesus by unworldly means. As Jesus once said, "unless one is born again, he cannot see the kingdom of God" (John 3:3).
A recent episode of the BBC TV drama Spooks depicted "born again Christians" murdering Islamic terror suspects. But contemporary Bible-believing Christians in the UK have not and I hope never will resort to voilence to defend or propagate the gospel of peace.
Posted by Guy Davies at 10:17 pm

At Broadway, Worcs (just north of us here in Glos), the local bonfire burning of Guy Fawkes was held at ...

I have written to the BBC to complain about that episode of Spooks which was a slander on Christianity.

Good idea. I think that Spooks was trying to be even handed. The programme recently featured Islamic and Jewish terrorism, so maybe they felt that they ought to give us some "Christian" terrorism to even things out. But the suggestion that "born again" Christians would murder Muslims was slanderous and offensive.