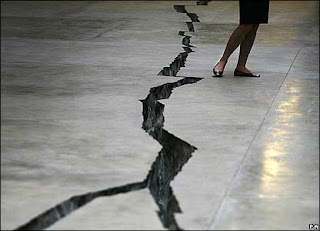 It seems to me that Reformed evangelicalism is becoming increasingly fragmented. We have rightly emphasised the importance of separating from gospel-denying error. But have we attached the same value to church unity? Many in our constituency would probably agree with Martyn Lloyd-Jones' call for separation from error in the 1960's. But we seem to have forgotten that his main concern was not separation, but unity. Indeed, he began his famous 1966 address [see here & here] by saying, "My subject is church unity". In his message he dealt with the sin of schism, which he defined like this, "It is division among people who are agreed about the essentials and the centralities, but who separate over secondary and less important matters." (Both quotes from Knowing the Times, Banner of Truth Trust, 1989, p. 246 & 253).
We are living in the wake of the recovery of Reformed doctrine in the 1960's and 70's. We should thank God that many churches now hold to the doctrines of sovereign grace. Those in the Reformed movement have a great common heritage, but cracks are appearing in the edifice of evangelical Calvinism in the UK. Partly lines are being defined more sharply. For example, some traditionalists with their love for the AV and older hymns have virtually equated their traditions with faithfulness to the gospel. Meanwhile progressives may have been too ready to embrace change for change's sake, needlessly alienating their more conservative brethren. Local fellowships are dividing over such matters, with break-off groups weakening the witness of the churches.
What are we to do about this?
1. We need to distinguish between essential gospel truth and secondary issues
Many of the points of dispute outlined above divide believers who are as one on gospel basics. Such friends may even be agreed on Reformed theology. Does it specify in any of the great Reformed Confessions which Bible translation or hymn book we should use? Is it right to divide churches on matters are not even covered by Reformed confessional theology? Where there are honest disagreements over matters like church government and Baptism, such issues should not be allowed to drive a wedge between churches. Our unity is based on the gospel not on uniformity in secondary matters. Brian Edwards makes a helpful distinction between "essential truth" that is vital for salvation, "significant truth" covering matters like church government and baptism and "phantom truth". He defines "phantom truth" like this,
"Those many things that are so very important to me and for which I can so easily make a big issue, but in reality they are simply part of my culture, tradition or personal preference and have little or nothing to do with the Bible. Evangelical churches normally argue and divide over phantom truths (which are not really truths at all) and rarely over vital or even significant truths. In other words, we make a big issue about issues in reverse order to their true significance." (See this interview with Brian Edwards).
I think that there is a lot of sense in those words.
2. We need to cherish Christian liberty
As children of the Reformation, we admire our forefathers who stood for the liberty of the gospel in the face of the spiritual tyranny of Roman Catholicism. We cheer the Puritans for refusing to submit to the Anglican Act of Uniformity. Should not we of all people recognise that other believers are free to come to different conclusions to ourselves about adiaphora or things indifferent? Take the increasingly contentious issue of education. As far as I'm concerned it is up to Christian parents to decide how best to educate their children. Ours attend State schools. But if other parents decide to send their children to a fee paying Christian school or to home school, that's up to them. It is wrong to suggest that there is only one principled option for Christian families. What right to we have to judge our fellow Christian "worldly" for singing contemporary hymns, drinking alcohol in moderation and such like? No one seems to know who said it first, but there is wisdom in the old dictum, "In things essential, unity; in doubtful, liberty; in all things, charity."
3. We need to cultivate spiritual maturity
Paul pinpointed spiritual immaturity as a factor in the fractious Corinthian church,
"And I, brethren, could not speak to you as to spiritual people but as to carnal, as to babes in Christ. I fed you with milk and not with solid food; for until now you were not able to receive it, and even now you are still not able; for you are still carnal. For where there are envy, strife, and divisions among you, are you not carnal and behaving like mere men? For when one says, “I am of Paul,” and another, “I am of Apollos,” are you not carnal?" (1 Corinthians 3:1).
The fractiousness of the Reformed scene does not say a lot for our spiritual maturity. We need to work on cultivating the mind of Christ so that we esteem others as better than ourselves (Philippians 2). Yet we are often immature and censorious. Some are sadly too quick to leave churches when they don't get their way rather than staying to work things through. But does not love cover a multitude of sins? One of the Proverbs tells us, "The discretion of a man makes him slow to anger, And his glory is to overlook a transgression." (19:11). No church is perfect and it takes grace, wisdom, patience and faithfulness to be involved in any fellowship for the long haul. The same principles apply when it comes to expressing unity between gospel churches.
I rejoice that Evangelical and Reformed unity, although fragile, still does exist in the UK. It finds expression in various Minister's conferences and at the grassroots level. It is great that many churches are working harmoniously together for the spread of the gospel. But we dare not ignore the cracks.
Posted by Guy Davies at 11:40 pm

"We need to distinguish between essential gospel truth and secondary issues"

Isn't this the problem? Seems to me that Reformed Evangelical churches have become so rationalised that there seems little space for unity without complete doctrinal agreement - which will never occur and thus no unity?

By the way, have you seen I have a new blog?