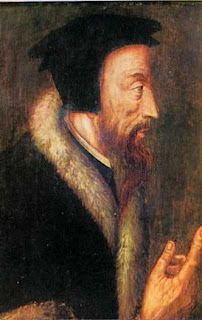 Here's are some things that have caught my eye (or ear as the case may be) in the last few days,

Paul Helm offers a "modest Calvinfest" for his April blogs. Check out John Calvin - What's the Big Idea? The Prof should know having written the excellent John Calvin's Ideas (see my review).

Gary Brady offers his thoughts on the Banner of Truth Conference.

I'm listening to Welsh diva Duffy's Rockferry. Great voice and some nice retro soul numbers with a modern edge. Radiohead recently performed a concert at the BBC's Radio Theatre. Check it out here.

Christanity's Dangerous Idea by Alister McGrath, SPCK, 2007. Only 6 chapters in so far. But a very illuminating and entertaining read. Sample:

"It is easy to find much to criticise among the senior clergy of that age [pre-Reformation], whose appointment often rested on the influence of family, fortune and power rather than any merit on their own part. In 1451, Duke Amadeus VIII of Savoy secured the appointment of his son to the senior position of bishop of the city of Geneva, later to be noted for its association with John Calvin. The appointment was not a great success. But what can you expect from an eight-year old?" (p. 23).

I've also been given Banner's handsome new reprint of Surgeon's Lectures to my students to review for the Protestant Truth Magazine. A May deadline is looming and the book is over 800 pages long. It's a difficult job, but someone's got to do it.