Bible study notes: Who "restrains" the man of sin? 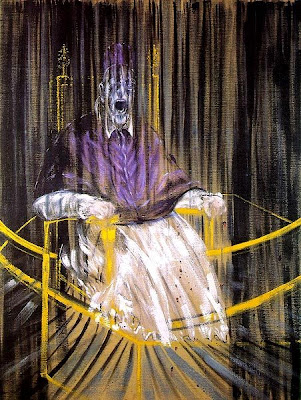 6And you know what is restraining him now so that he may be revealed in his time. 7For the mystery of lawlessness is already at work. Only he who now restrains it will do so until he is out of the way. 8And then the lawless one will be revealed, whom the Lord Jesus will kill with the breath of his mouth and bring to nothing by the appearance of his coming. 9The coming of the lawless one is by the activity of Satan with all power and false signs and wonders (2 Thessalonians 2:6-8, ESV).
In vs. 6 a principle or power restrains the man of sin, “what is restraining”. In vs. 7, the principle is described in personal terms “he who restrains”. This restraining factor or person has been variously interpreted. In his commentary, (The Bible Speaks Today, The Message of Thessalonians, IVP, 2004), John Stott runs through the options.

b) What restrains is the preaching of the gospel and who restrains is Paul. But Paul nowhere puts himself at the centre of great eschatological events. Elsewhere in his teaching he does not suggest that his ministry was holding back the revelation of the man of sin and the onslaught of Satan. Indeed, Paul recognised that he could sometimes be restrained and hindered by the devil, 1 Thess 2:18. Besides Paul has long been removed from the scene of history and his being “taken away” vs. 7, did not usher in the revelation of the man of sin.

c) The restraining factor was the Roman state. This is Stott’s preferred option. Leon Morris (Tyndale New Testament Commentary, 1 and 2 Thessalonians, IVP, 1989) and Geerhardus Vos (The Pauline Eschatology, P&R, 1986 - chapter V. The Man of Sin) also lean in this direction. In Romans 13, Paul teaches that the function of the state is to restrain evil. But in the book of Revelation, the Roman state with its emperor worship and persecution of the saints is said to prefigure the man of sin - Rev. 17:7ff. Besides, the Roman Empire has fallen, yet once more in terms of vs. 7, the man of sin has still not been revealed.

So then, what or who exactly is “restraining" the man of sin? The problem with all the proposals listed above is that they assume that in this instance, the Greek word katechon means “restrain”. This suggests that some power or person is holding back the revelation of the man of sin. But the word has a broader range of meaning. Gene L. Green (The Pillar New Testament Commentary, The Letters to the Thessalonians, Apollos/Eerdmans, 2002) points out that the katechon could be translated, “that which seizes” or “one who possesses”. In some non-biblical sources the word is sometimes used of those who were seized or possessed by demonic powers. According to Green’s proposal, “that which seizes” does not entail restraining the man of sin. Rather “that which seizes” ensures that he will be revealed “in his own time” vs. 6. This demonic power was already at work, hence the false teaching that had infiltrated the Thessalonian church, vs. 7. (cf. 1 Tim 4:1) When the time is right, “he who seizes” will take possession of the man of sin and then withdraw from the scene to allow the lawless one to do his work. We find a similar transfer of malignant power between the beasts of Revelation 13, see especially vs. 12 & 15, cf. 17:12 & 13.

The "man of sin" or the "lawless one" will be kind of parody of Christ. In John's terms, he is the antichrist. Note the way Paul describes his advent. He will be revealed – vs. 8 cf. Jesus revelation at the second advent, 1:7. He is described as "coming" vs. 9 (Greek, parousia), a term associated with the second coming of Christ, vs. 8 cf. 2:1. As the antichrist figure, he will set himself up against God and demand worship from all humanity, vs. 4. When the man of sin is revealed, the people of God will know him for what he is. Then the meaning of this rather difficult passage will no doubt become clear, at lest to those whose names are written in the Lamb's book of life. As Vos wisely points out, “2 Thess. belongs among the many prophecies, whose best and final exegete will be eschatological fulfilment, and in regard to which it behoves the saints to exercise a peculiar eschatological patience.” (The Pauline Eschatology p. 133).
Posted by Guy Davies at 10:00 pm

This is an interesting discussion.

In view of the apocalyptic imagery of 2 Thessalonians 2 and that Paul casts the man of sin after the imagery of Daniel 11-12, I incline to the view that the agent of restraint is an angelic being. Angels feature prominently in apocalyptic writings as God's agents and this is also true in Daniel 9-12.

The problem i see with this spirit of the Antichrist seizing is similarly (as you pointed out contradictory) to the Holy Spirit's role within in the Church.

As the Antichrist spirit is in this world already, so shall it seize a man. This spirit will then, not be taken away for his glory sake, but only be all the more exalted. The Antichrist embodies this spirit, eventually influencing many more to the ends of the earth.

Understanding God will not forsake His Church and may it be by His mercy alone we be kept in such days, I assume the hand of God is being lifted from restraining man's sin into the fullness of transgression (dan 9:23). the Lord through righteous judgment has but withheld this day, even since the tower of Babel. Now, it is lifted and corporate unity in depravity may finally be permitted for His glorious revealing.

With my minimal revelation, I assume Him taking away Himself is the unified permission of man's sin and the handing over of His beloved saints for a time unto this spirit's temporal torment (Dan 8:24, Rev 13:7)

Though he [antichrist] overcomes us, he shall not overcomes us. Though He is taken out of the way [Antichrist global regime], He shall not be taken away [21 numbered judgments].

I heard a sermon by a man who holds to the Roman emporor as restrainer. He argues that as Paul writes to the Thessalonians"you know", he had likely talked with them about it but would not put it in writing since he says they will be removed. That would have caused trouble with Roman authorities. He holds the view held by the Reformers and their successors that the papacy is the man of sin. Rome weakened, a religious power arose at Rome_the Pope. So in this view the man of lawlessness has been revealed, the apostasy has occurred with tge rise of institutional Christianity of the Rome kind(and yet perhaps a fuller future manifestation). These are hard things to say in our ecumenical age but let's examine the Scripture and history and see if these things are so. Lord Jesus help us. Check out the sermon here, by Robert Jennings titled Second Coming #4_Man of Lawlessness