My long awaited order of the complete four volume set of Bavinck's Reformed Dogmatics was delivered yesterday. Baker have done an excellent job in producing four very handsome volumes that would adorn the shelves of any study. I've dipped in here and there and the translation reads really well. But it's the substance of Bavinck's theology that makes this set so valuable. Here he is on the doctrine of the Trinity,
"The doctrine of the Trinity is of incalculable importance for the Christian religion. The entire Christian belief system, all of special revelation, stands or falls with the confession of God's Trinity. It is the core of the Christian faith, the root of all its dogmas, the basic content of the new covenant. It was this religious Christian interest, accordingly, that sparked the development of the doctrine of the Trinity. At stake in this development - let it be said emphatically - was not a metaphysical theory or a philosophical speculation but the essence of the Christian religion itself. This is so strongly felt that all who value being called a Christian recognize and believe in a king of Trinity. The profoundest question implicit in every Christian creed and system f theology is how God can be both one and yet three. Christian truth in all its parts comes into its own to a lesser or greater degree depending on how that question is answered. In the doctrine of the Trinity we feel the heartbeat of God's entire revelation for the redemption of humanity." (Reformed Dogmatics, Volume 2: God and Creation, Baker, 2006, p. 333).
I think I'm going to enjoy reading this thoroughly God-centred dogmatics. 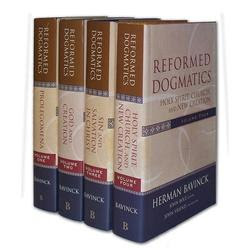 Nice one. I didn't realise they'd released Vol. 4 – I'll have to complete my own set without delay. Happy reading!

I hung on until Vol. 4 became available because it was cheaper to buy the set as a whole. Happy reading indeed!

I'd missed that vol 4 got published too, that means I can complete the set as well. These is meaty, deep, moving, stirring theology. Love it. Well done Dutch Reformed Translation Society for such an excellent job. My Dutch would not have been up to it - I only know the word hagel (chocolate strands for putting on bread) which I doubt Herman uses much. It's certainly not in vols 1-3.

Do you know if this is available to read online? (Not necessarily the Baker version, but any version?)

Not as far as I know, Kate.