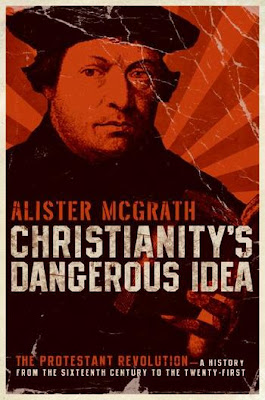 Christianity's Dangerous Idea: The Protestant Revolution,
a history from the sixteenth century to the twenty-first,by Alister McGrath, Harper Collins (USA) and SPCK (UK), 2007.
In this book Alister McGrath attempts to tell the story of Protestantism from its beginnings in the sixteenth century right up to the present day. The author does this with his customary verve, wit and style. Although readers may disagree with McGrath's analysis at some important points, it is difficult not to admire the sheer scope of this ambitious project. Not content with giving us a gripping narrative of Protestant history, the writer also dons the mantle of prophet to suggest the possible future of Protestantism.
So, what is "Christianity's dangerous idea"? It is the Protestant insistence that each individual believer has the right to interpret the Bible. This enabled early Reformation thinkers to critically examine the teachings of the Roman Catholic Church in the light of Scripture. Take sacramental theology. For Protestants, it was not enough that the institutional Church held that there are seven sacraments. If the Bible acknowledged only two, namely the Lord's Supper and Baptism, then that was it. The other supposed sacraments such as penance and extreme unction were bogus and had to be abandoned. Who gave the Pope the authority to add to the plain teaching of Scripture anyway?

I am distinctly uncomfortable with the way Christianity's 'dangerous idea' is worded in this book - or at least the book review; "the Protestant insistence that each individual believer has the right to interpret the Bible". Is that really what 2 Peter 1:20,21 means?
That sounds like a post-modern distortion of the implications of 'sola Scriptura', which I would suggest is really the dangerous idea. If you look at the Westminster Confession I don't think you find that 'dangerous idea' stated in it. And if this was the big issue, why did the magisterial reformers and the Massachusetts colonists not follow through on this and allow full religious liberty? I think Alister McGrath is trying to sell us a pup - and I think some people are tempted to buy it!
What do other folk think?

I hope I haven't misrepresented McGrath's basic thesis. In his own words,

"Protestantism took its stand on the right of individuals to interpret the Bible for themselves rather than be forced to submit to "official" interpretations handed down by popes or other centralized authorities." (p. 3).

In the review I take issue with the suggestion that this means "anything goes".

No, Guy, I suspect you are spot on; my comment was directed at what I think is potentially a misrepresentation of the reformation view of sola scriptura.
I am currently reading the third in a series of Henrician who dunnits by a fellow called Sampson about a lawyer by the name of Shardlake.
Set in Cromwell's time and just after, it often interacts with reformation issues and where it does address theological issues it also identifies the crucial difference as this book does.
My question is really; 'Is this an accurate representation of the reformation's fundamental distinctive?'
Having just thought about it, why is it called CHRISTIANITY'S dangerous idea, and not Protestantism's or the Reformer's? Isn't anyone else Christian? Or is this the only dangerous idea in Chrsitianity?

McGrath is not unsympathetic to what he regards as "Christianity's Dangerous Idea", namely,

"The dangerous new idea firmly embodied at the heart of the Protestant revolution , was that all Christians have the right to interpret the Bible for themselves." (p. 2).

He sees this as a good thing because it enabled the Reformers to identify and expose abuses in the Catholic Church in the light of Scripture. Also the "dangerous idea" enables Protestants to reflect critically on their own teachings. But the "dangerous idea" when taken on its own had opened Pandora's box,

"If every individual was able to interpret the Bible as he pleased, the outcome could only be anarchy and radical religious individualism." (p. 3).

McGrath takes Luther's alarm at the Peasant's Revolt as a case in point.

But as you say, I'm not sure that the Reformers understood the the "dangerous idea" in exactly the way McGrath suggests. Yes, all believers have the right to interpret the Bible, but that does not mean all interpretations are equally valid. That is why the Reformers drew up confessions of faith, to safeguard the right interpretation of Scripture.

I'm not sure why McGrath specifies "CHRISIANITY'S Dangerous Idea" other than the suggestion the Protestantism, based on that principle led to a radical reshaping of the Christian faith. He draws some parallels between Protestantism and Islam and wonders whether Islam might succumb to a kind of reformation based on fresh reading of the Koran.

Thanks for your reply, 'EP'. I've googled the matter and come across a useful article by Timothy George at http://www.founders.org/journal/fj03/article1.html
I think section 3 pins down quite well the point I am trying to make. He blames Hegel and Schleiermacher (always a good move!) for a distortion of reformation distinctives. That is why I am unhappy with McGrath's articulation, which is the same as the author I quote - who has a history degree. So I think we should not allow this way of framing our view of the new access to Scripture that the reformation brought to shape our thinking about the implications of protestantism. It is very much a projection of current thinking back onto the issues of the reformation - and indeed the real issues that we still have to grapple with today.
However, the useful thing that arises from this book is that if a learned bloke like McGrath accepts this (a) reinterpretation of history and (b) this distortion of Christianity, then probably many others within our churches do as well.
As always, terms may mean different things to different people, and that can lead to misunderstanding and wrong thinking.

I found your analysis excellent. I remember reading the book years ago and feeling disturbed after I finished. I felt as if ... well, it was more or less a demonstration of the results of "Christianity's dangerous Idea." However, you are correct on two fronts, (1) McGrath does ignore the reformed resurgence. Whatever anyone makes of it, the reformed movement is undeniably sweeping the evangelical landscape. (2) McGrath does approach history from more or less a secular perspective (at least in method). Don't get me wrong, I like McGrath. However, I think he is guilty of not always being discerning. He sadly does not pass judgment on things he ought to, and praises some things he probably should be more critical of. Thanks