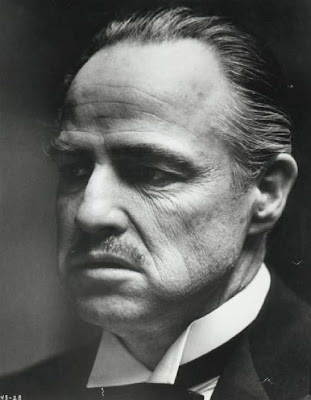 The Don Dia Corleone's beloved daughter Blodwyn was married at last. She was 42, and what with her being no oil painting, few expected that she would ever get hitched. But she fell for some unsuspecting fella, and daddy sent the boys round to make him an offer he couldn't refuse. Next thing he knew, poor Owen Llewellyn had asked to Blodwyn to be his wife. She gleefully accepted his somewhat ambivalent proposal. Owen's parents never did understand why they were taken hostage one Thursday afternoon only to be released to find that their boy was going to be the husband of Blodwyn Corleone. "But I thought he liked Sally Williams from no. 74.", said his bemused mother. It was the Welsh society wedding of the year. After the ceremony, the festivities began. The Cwl Cymru glitterati descended on the Don's place en masse. Everyone was there; Gavin and Charlotte, Tom Jones, the Stereophonics, Rhodri Morgan and that goat that marches with the military band before rugby matches at the Millennium Stadium.
While the happy couple (well Blodwyn was happy anyway) danced away to the strains of Delilah and the party was in full swing, the Don retreated to his office. Worried looking men were 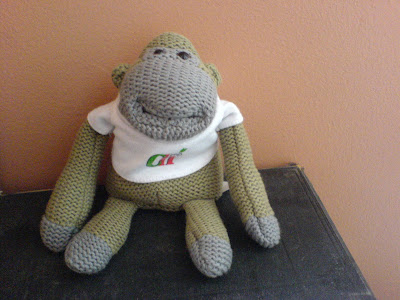 ushered into Mr. Corleone's presence to pay their respects to the big man. Then David Sky arrived. No one knows how he got there. He certainly wasn't invited. But the old monkey was fed up with being the Exiled Preacher's pet. He wanted glamour and violence and how better to get that than join the Taffia mob?
Sky sauntered into the holding room where the Don's men kept a watchful eye on those who were about to be given an audience with the Godfather. He felt a bit out of place wearing a "PG Tips" T-shirt, while the other gents were dressed in dark double breasted suits. But what he lacked in sartorial elegance, he more than made up for with attitude and swagger. He blagged his way into the Don's inner sanctum. It was make or break time. This is what they had to say:
DC: Hey you, whaddya doin here?
DS: I'd like to join the Taffia.
DC: Oh yeah?
DS: Yes, that's right.
DC: Well, we'll see about that.
DS: Oh good!
DC: What?
DS: That's great, I didn't think it would be quite so easy to join the mob.
DC: Are you kiddin?
DS: Me, a kitten? No, I'm a monkey actually?
DC: I said kiddin - jokin, not kiddin as in cat, stupid!
DS: Sorry! You speak kind of mumbly.
DC: You talkin' to me?
DS: I can't see anyone else in the room.
DC: What?
DS: Never mind. The thing is that I'd like to join the Taffia. I think I could be really useful to you.
DC: How exactly?
DS: Well I'm a bit of a rough, tough bad lad.
DC: Now ya talkin. Whaddya done?
DS: For starters, I survived being crushed by The Drama of Docrine. Then I went to school with my old boss' daughter and bit a kid. Once I got stuck up a Christmas tree. If you want anyone "taught a lesson", I'm your monkey.
DC: You survived being crushed by The Drama of Doctrine? Really?
DS: Yes, sure.
DC: That's heavy stuff. I'm gonna have to think about this.
DS: Please let me join. I'm fed up with that boring old Exiled Preacher and his dusty books. I want glamour and danger. I'll get a double breasted suit and a violin case with a Tommy Gun inside and everything.
DC: You began life in a box of tea bags right?
DS: Er, yes. But what's that got to do with it?
DC: I think I may be able to use a guy like you. You're hired.
DS: That's cool. Now, who do you want me to send sleeping with the fishes?
DC: If you started off as a tea monkey, then you should be able to make a good cuppa. Mine's white with no sugar. Four times a day, 8am, 11am, 1pm and 3.30pm. If you don't make it right then you'll be sleeping with the fishes! Geddit?
So, David Sky left the comfort and security of the Exiled Preacher's study for the excitement and danger of Dai Corleone's lair and ended up as a terrified tea boy. The sky's the limit eh? Couldn't happen to a nicer monkey.
Posted by Guy Davies at 6:12 pm

Hope it was worth the wait. Never mind Alien vs. Predator!