Jesus and the Word of God 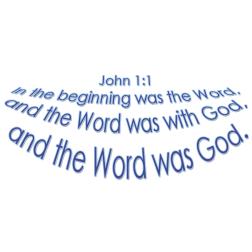 An excerpt from my paper, Holy Scripture as the living and active Word of God, given at today's Reformed Ministers' Fraternal, Honiton, Devon:
Holy Scripture and the Son
Jesus taught that the Old Testament Scriptures were about him, John 5:46, Luke 24:45-47. New Testament revelation is also Christ-centred from the Gospels to Revelation where the Lamb is all the glory. In that sense there is a clear relationship between the Son and the Scriptures. The written Word bears witness to Jesus the living Word, 2 Timothy 3:15.

But is it right to drawn an analogy between Jesus as the divine Word made flesh (John 1:1, 14) and Scripture as the word of God through human beings (2 Peter 1:21)? In defending biblical inerrancy, Evangelicals often say something like this: Jesus was fully God and fully man, yet without sin. And so the Bible is the Word of God through human beings, yet without error. Writers such as John Webster (Holy Scripture: A Dogmatic Sketch) and following him Andrew McGowan (The Divine Spiration of Scripture) have questioned whether it is appropriate to speak in this way.

What’s the problem here? As Webster notes, the biblical writings are distinguished from all other literature by the designation “Holy Scripture”. The theologian invokes the concept of the ‘sanctification’ of Scripture to hold together both the divine and human aspects of the Bible, “the biblical texts are creaturely realities set apart by the triune God to serve his self-presence.” (p. 21). But Webster is unhappy with the oft drawn analogy between Scripture as a divine/human book and the union of divine and human natures in the person of Christ. He suggests that the analogy blurs the distinction between Christ and the Bible. Like Karl Barth Webster prefers to speak of Scripture as a witness to God’s Word rather than God’s Word written. Scripture sometimes speaks of itself as a witness to Jesus, John 5:39. But for Barth this means that Scripture is a fallible and very human witness to the divine Word,

"The men whom we hear as witnesses speak as fallible, erring men like ourselves. What they say, and what we read as their word, can of itself lay claim to be the Word of God, but can never sustain that claim". (Church Dogmatics Book I, 2, p. 507).

Webster formulates the idea of Scripture as testimony with greater care and respect. He does not want to so stress the fragility of Scripture’s human witness to the divine Word that the relationship between the Bible and God’s self-revelation become almost accidental. We have to bear in mind the work of the Spirit in the production, preservation and interpretation of Scripture. To cast doubt on the reliability of Scripture’s testimony to Jesus is to leave the church in doubt concerning Jesus himself.

What Webster wants to avoid in rejecting the analogy between Christ and the Bible is the attribution of divine properties to the Bible. At this point he draws on Herman Bavinck’s idea of the ‘servant form’ of Scripture. As developed by Berkhouer, this perspective is taken to suggest that in the Bible we have the treasures of God’s self-revelation in ‘earthen vessels’, subject to human weakness. Webster does not spell out what he means by human 'weaknesses', but I guess he has the traditional Evangelical doctrine of biblical inerrancy in his sights. It is rather strange however, that Webster claims Bavinck in support of his views as the Dutch theologian’s notion of the ‘servant form’ of Scripture is explicitly rooted in an incarnational analogy,

"The incarnation of Christ demands that we trace it down into the depths of its humiliation, in all its weakness and contempt. The recording of the word, of revelation, invites us to recognise that dimension of weakness and lowliness, the servant form, also in Scripture. But just as Christ's human nature, however weak and lowly, remained free from sin, so also Scripture is 'conceived without defect or stain'; totally human in all its parts but also totally divine in all its parts." (Reformed Dogmatics Volume 1, Herman Bavinck, Baker Academic, 2003, p. 435).

Of course, the analogy between Christ and Scripture demands careful handling and theological sensitivity. We must make a clear distinction between the hypostatic union of divine and human natures in the person of Christ and the Bible as a divine/human book. But both Jesus and Scripture are identified as the logos of God. In his handling of the Old Testament, Jesus himself made it clear that for him, what Scripture said, God said (John 10:34 & 35). We cannot downgrade the status of Scripture as God's written word in order to safeguard the uniqueness of Jesus as the Word of God incarnate without disregarding Jesus' own testimony to the Bible. But when we confess that the Bible is God's word through human beings, we are not suggesting that there is a personal union between the divine and human sides of Scripture that is comparable to the union of God and man in Jesus. Rather what we have in Scripture is the communicative action of the living God who speaks to us through the human words of the Bible. This construction safeguards both the uniqueness of Christ and respects what Scripture says about itself as the Word of God.

It is through the witness of the written Word that we encounter Jesus the living Word. 2 Timothy 3:15. The Christ of Scripture is the risen Lord and Saviour of human beings. We have not seen him, but having read about him in Scripture and heard of him in the preaching of the gospel we have come to believe in him, love him and rejoice in him with joy inexpressible and full of glory, 1 Peter 1:8.
Posted by Guy Davies at 3:31 pm