What the Bible Teaches about the Future by Peter Bloomfield 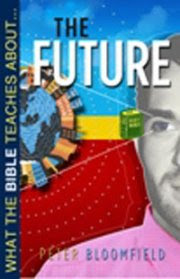 What the Bible teaches about the Future,
Peter Bloomfield, EP Books, 2009, 256pp

As the author rightly says, the Bible is an eschatological Book that points toward a glorious future hope. It is important for Christians to have a sound grasp of what the future holds, yet many believers are confused at this point and clarity of vision is sometimes lacking. Our hope must be based on a clear understanding of Scripture, where God’s great purpose for the world is revealed. The writer's aim is to enable the reader to know for certain where their eternal destiny lies.

Bloomfield gives a convinced Amillennialist account of biblical eschatology. He begins by pointing out that we are living in the “last days”, the period between the “already” of Christ’s first coming and the “not yet” of his return in glory. The writer’s handling of the Olivet discourse (Matthew 24) is especially commendable and helpful. But his views on the future of the Jews as set out by Paul in Romans 9-11 will not command universal acceptance even amongst those who might agree with his basic stance. It is right to stress that the old covenant promises made to Israel regard to the Promised Land no longer apply in the new covenant age. What matters now is belonging to the Israel of God comprised of believers gathered from all the nations. Nevertheless, the people of Israel are still “beloved for the fathers’ sake”. Contrary to the way Bloomfield interprets Romans 11 it seems that Paul expected that there will be a widespread turning to the Lord by Jewish people before the end comes. In the reviewer’s opinion, John Murray’s exegesis of the passage in question in his commentary on Romans is to be preferred.

Be that as it may, Bloomfield sets before his readers the urgent need to be ready for the next big event in redemption history – the return of the Lord Jesus Christ. All people, both Christians and non-Christians alike will be summoned before his judgement seat and made accountable to him. The author speaks plainly and soberly of the eternal, conscious punishment of the wicked. He also makes it clear that the final state for believers is not simply dying and going to heaven. We look beyond that to the resurrection of the body by the power of the Lord Jesus and eternal life in the new creation. Having said that, not nearly enough attention is paid to the resurrection hope in this book. While five chapters are devoted to the future of the Jews, not one single chapter is dedicated to a consideration of the resurrection of the dead in Christ. It is regrettable that the writer barely refers to 1 Corinthians 15. Any book on biblical eschatology should offer at least some sustained reflection on that key chapter. There are many good things in this study and it will no doubt sharpen the reader's focus on eternal matters. But the omission just noted makes for a rather incomplete and patchy account of what the Bible teaches about the future.

The best recent book on the subject to my mind is The Promise of the Future by Cornelis P. Venema, 2000, Banner of Truth Trust. If you are looking for a readable and up-to-date study of eschatology that does justice to the biblical contours of the Christian hope, then that's the one to get.

*An edited version of this review will appear in a forthcoming edition of Protestant Truth. The books referred to may be ordered from the PTS Christian Bookshop, here.