Who Made God? by Edgar Andrews 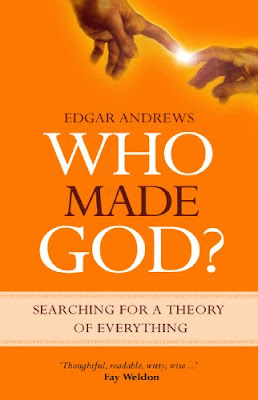 Who Made God? Searching for a theory of everything,
by Edgar Andrews, EP Books, 2009, 303pp.
Some Christian critiques of atheistic Darwinism resemble an unseemly scrap over some old dinosaur bones. The attitude is strident and ill tempered. Arguments in favour of the Christian position are often tired and unconvincing, amounting to little more than than variations on the theme of Paley's well-designed watch. But, to coin a phrase, here is something completely different. For starters, Andrews does not propose to argue from the presence of design in nature up to a some kind of a divine Designer. He begins with the hypothesis that the God of the Bible is the true and living God who made all things. From that starting point the genial professor attempts to show that reality is exactly as we should expect if his underlying assumption is true.
The book is full of detailed scientific discussion on the origin of the universe and Darwinian evolution. With his multidisciplinary expertise Andrews ranges over many different fields in his quest for a 'theory of everything' - an all encompassing description of the material universe that makes best sense of all the available data. He skilfully guides the reader through the complexities of the Big Bang account of the origin of time and space, Einstein's theory of general relativity, the laws of nature, quantum mechanics, string theory and much more. The writer subjects evolution by natural selection to critical scrutiny, demonstrating that random genetic mutations cannot account for the evolution of all living things from a single cell "jelly pod". Andrews concludes that no merely naturalistic 'theory of everything', not even one that reconciled general relativity with quantum mechanics could explain why an ordered universe exists in the first place. If all that sounds a bit highfalutin and technical for those (like me) with a non-scientific background, then be not afraid. Sooty is on hand to help, as are countless other handy metaphors from a breakfast of cereal, yoghurt and toast, to ferrets and steam engines.
Here is an example of Christian apologetics at its best; appealing, well argued and based on the the biblical presupposition, "In the beginning God" (Genesis 1:1). While the book was not written simply as a rejoinder to Richard Dawkins and his neo-Darwinian fellow travellers, Andrews ably shows that atheism is ill equipped to explain the origin of the universe and the development of life on earth. The author concludes by telling us the good news that our Maker is also the Redeemer of fallen human beings through the death and resurrection of Jesus Christ. Reading Who Made God? will strengthen Christians in their faith and better enable them to witness to their non-believing friends. Atheists who happen upon this book should be prepared to have their views challenged and undermined by the compelling force of professor Andrews' arguments.
Edgar Andrews interviewed at challies.com.
Order from PTS Christian Bookshop here.
Posted by Guy Davies at 7:52 am