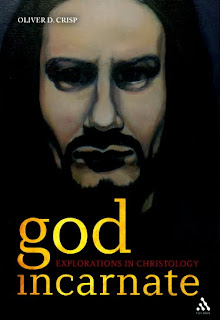 God Incarnate: Explorations in Christology,  by Oliver Crisp, T&T Clark, 2009, 191pp
The fact that in Jesus Christ we have one who is both God and Man constitutes one of the high mysteries of the Christian faith.  The way in which we describe the relation between the divine and human in the incarnate Son of God requires careful thought and theological sensitivity. What Crisp offers here is a study in important aspects of the doctrine of Christ from the perspective of analytic theology. Analytic theology as defined by the author entails a way of doing theology that employs the tools of analytic philosophy. Basically that means a theological method that utilizes rigorous logical argumentation in order to clarify the truth. This does not mean that human reason may prescribe what is acceptable in  divine revelation. In Crisp's hands analytic theology is an exercise in faith seeking a clearer understanding of the self-revelation of God in Holy Scripture.

It has to be said that Crisp is not attempting to develop anything approaching a complete Christology in these pages (were such a project even possible given the subject). Rather than sketching out the main components of the doctrine of Christ, the scholar has chosen to give detailed attention to selected Christological issues. The current work is a compaion volume to Crisp's earlier foray into Christology, Divinity and Humanity: The Incarnation Reconsidered, Cambridge University Press, 2007.


The book's opening chapter is devoted to Christological Method. Crisp makes it clear that Scripture is the "norming norm" for the theological task. But that does not entail a solo scriptura approach that neglects the rich creedal and theological inheritance of the church. The ecumenical creeds such as the Nicene Creed and the Chalcedonian Definition do not have the same authority as Scripture. But they carry weight as they give expression to the consensus of the Catholic Church as she was led by the Holy Spirit to respond heresies concerning the Trinity and the Person of Christ. The views of key Christian theologians also aught to be taken into account, especially such "Doctors of the Church" as Augustine, Anselm, Thomas Aquinas, Martin Luther and John Calvin. But the opinions of the theologians are subject to the critical authority of Scripture and do not have the same clout as the ecumenical creeds. Also under the heading of method the author wonders whether the categories of Christology from 'above' and  'below', and 'high' and 'low' Christology  are as meaningful as is sometimes assumed. Crisp offers a biblically and creedally orthodox analytic Christology in which aspects of the doctrine of Christ are probed and discussed for the sake of the gospel. At least that is his professed aim. Whether some features of his treatment of the doctrine of Christ, I'm thinking especially of the chapter on Multiple Incarnations strictly have anything to do with the proclamation of the evangelion is a matter to which I will return.

Having set our his basic approach, Crisp then proceeds to give chapter length treatments of a number of Christological themes. Discussing The Election of Jesus Christ, the theologian asks whether it is appropriate to speak of Christ as the ground of the believer's election. In keeping with his 'theology of retrieval' Crisp's handling of the relevant biblical materials is informed by a discussion of what older Reformed writers had to say on this subject. His proposal that Christ is the Elect One in whom the people of God are elected for salvation attempts to take on board some of Karl Barth's concerns with the traditional Reformed doctrine of election. But this does not mean that Crisp succumbs to Barth's problematic reconfiguration of election that tends towards universalism.

In The Pre-Existence of Christ the writer subjects influential systematic theologian Robert Jenson's ideas on Christ's pre-existence to critical scrutiny. Deploying the logical rigour of his analytical theology Crisp exposes the incoherence of Jensen's suggestion that the Logos was never asarkos, that is without flesh. He summarises, "Crucial to what Jenson says here is that God is future to himself and only thereupon past and present. Similarly in the Incarnation it is the futurity of the Son that is somehow 'prior' to the Incarnation and it is in this futurity that the Son is eternally begotten by the Father. But it is difficult indeed to know what to make of this." (p. 74). Quite.

Two chapters are devoted to the virgin birth of Christ. In The 'Fittingness' of the Virgin Birth Crisp posits that the Son could have assumed a sinless human nature apart from virginal conception. But as the writer concludes, the biblical data points to the virgin birth, which was also a fittingly unique way of God becoming man. I would be prepared to argue that the virgin birth was not only fitting, it was also necessary. By virtue of his virginal conception Christ was not born in Adam after whose likeness all naturally generated human beings are begotten, (Genesis 5:3 cf. Psalm 51:5, Romans 5:12). As John Owen put it, "Being not begotten by natural generation, it [Jesus' human nature] derived no taint of original sin or corruption from Adam". (Works III p. 168). Christ's human nature was the product of Mary's ovum plus the genetic material (including the male Y chromosome) miraculously supplied by the Holy Spirit. He was conceived of the 'substance' of the virgin Mary (Westminster Confession of Faith, VIII:2) and so is one with us in his humanity. But in the virginal conception there is also a discontinuity and newness that is needful for Jesus as the last Adam, the head of God's new humanity. Donald Macleod reflects, "Adam did not beget Christ. The Lord’s existence has nothing to do with Adamic desire or Adamic initiative. Christ is new. He is from outside. He is not a derivative from, or branch of Adam." (The Person of Christ p. 410). On that basis, the virginal conception of Christ was more than fitting, it was necessary.

The fascinating relationship between Christology and bioethics is discussed in Christ and the Embryo. If human life (in Christian theology this means ensouled human life, not just biological life) does not begin at conception, then Christ was not fully human from conception. If we hold that ensoulment happens some time after conception, then in Christ's case that would entail an interim Apollinarian account of the incarnation where the divine Logos albeit temporarily took the place of Jesus' human soul. Apollinarianism is a heresy, ruling out this version of the enfleshment of Christ. Of course there is a difference between the humanity of Christ and the humanity of all other human beings. All other humans have a human nature and are human persons. The Son of God did not become a human person. That confuguration was the  error of Nestorianism which was condemned by the Council of Chalcedon. Rather Christ is a divine person with a human nature. Yet just as the Son assumed an ensouled humanity from the moment of the conception of his human nature, so also all other human beings are conceived in an ensouled state. With humans apart from Christ that means all human beings are human persons from conception. All this has obvious ethical implications for IVF, embryonic stem cell research and abortion.

Next up Crisp gives attention to the issue of whether Christ was de facto sinless or whether he was impeccable i.e. that it was impossible for him to sin. It is argued by those who hold to the sinless view that if Christ was impeccable, then his temptations were not genuine, which seems contrary to the biblical witness, e.g. Hebrews 4:15. But Crisp reasons that an impeccable Christ could still feel the 'pull' of temptation without him ever being in danger of sin due to the hypostatic union. The theologian concedes that in his humanity Christ had the 'capacity' to sin while that capacity could never have been realised. But an unrealisable capacity is hardly a capacity at all. It is best to say that while Christ faced genuine temptations, he could not have sinned because he was (and is) a divine person with a human nature.

Historic Christian theology teaches that human beings consist of body and soul or spirit. In terms of the incarnation, Chalcedonian Christology confesses that Christ took a full human nature including a body and  a 'rational soul'. However, some recent theologians have questioned the standard 'substance dualist' view of human nature. While they believe in both spiritual and material realms in respect of God and the rest of creation, they hold to a materialist account of human life. Prima facie this seems to suggest an Appolinarian Christology. But Crisp argues that this need not be so. Even in the case of a materialist conception of human nature, human mental life is not reducible to mere physical impulses in the brain. However, in the end the writer opts for the standard 'substance dualist' view, that human beings including the incarnate Christ have both material bodies and spiritual souls. Crisp reaches this conclusion by a process of analytical reasoning within the parameters of orthodox Christology. That is all well and good, but if Scripture is indeed the 'norming norm', then surely the Bible should be allowed to determine the viability of materialist anthropology and Christology. Little or no attention was given to key biblical texts that speak to this matter such as Matthew 10:28 and 1 Thessalonians 5:23. Also it should be factored in that according to Scripture conscious human life continues after physical death, 2 Corinthians 5:8, Philippians 1:23. It is hard to see how a materialist anthropology/Christology could be squared with the witness of Scripture.

Finally Crisp reflects on Thomas Aquinas' claim that there could be multiple incarnations, or that Christ could assume more than one human nature. He takes issue with Brian Hebblethwaite's poorly argued objections to Aquinas' view and then concludes that in fact the incarnation was a unique event. I appreciate Crisp's clear reasoning and his repeated insistence that in the incarnation the Son of God did not become a human person, but a divine person with a human nature. Preachers need to be absolutely clear about that point, which isn't always the case [see here]. Earlier in the book Crisp said that if Christology is not about the gospel, then it but sophistry and illusion. But I wonder what this discussion of multiple incarnations has to do with the proclamation of the gospel. If Scripture is taken seriously, then the singularity of the incarnation is self-evident. Why indulge scholastic speculations when the urgent task of the church is to announce the good news that Jesus came into the world to save sinners? A similar complaint could be made against Crisp's theorising on whether Christ could have become sinlessly incarnate apart from the virgin birth. When subjected to the 'preachability test' some aspects of Crisp's Christology fail to pass muster. In other words, for all its strengths, is analytical theology sufficiently attuned to the biblical evangelion?

See here for an interview with the author.
Posted by Guy Davies at 9:11 am