Some thoughts on hearing Lloyd-Jones preach (on CD) 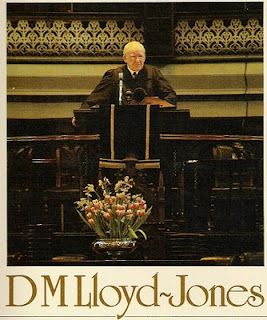 Some time ago I read and reviewed Lloyd-Jones Messenger of Grace by Iain H. Murray. But I didn't listen to the audio CD of a sermon on John 8:21-24 that came with the book until tonight. I never got to hear Lloyd-Jones "live", as I was converted a few years after his death. But as a young Christian I frequently used to listen to "the Doctor's" messages on cassette. Indeed, in my first attempts at preaching I found myself trying to ape the preacher. That obviously wasn't a good thing so I stopped listening to his sermons in an attempt to find a style of my own. I carried on reading stuff by and about him in the meantime, but for about twenty years or so Lloyd-Jones' voice fell silent to me.
However, this evening, almost on impulse I found myself reaching for Messenger of Grace, prizing the CD from its jacket attached to the back cover of the book and listening to it on my PC. The message and the manner in which it was delivered blew me away as Lloyd-Jones' distinctive voice boomed out of my PC's speakers. As the sound echoed round the house members of the family filed into the study one by one, strangely drawn by this fifty year old sermon. Here are some thoughts on hearing Lloyd-Jones' preaching once more.
One big idea
That our relationship with Jesus will determine the way we die.
Structure
The message has a clear structure, organised around three main points. 1) People don't think about death. 2) People think wrongly about death. 3) The right view of death.
Logic
Each point was developed with compelling logic, the fallacies of those who don't think about death and who think wrongly about it were clearly exposed. By the end unbeliever  was faced with a stark choice, "Die in your sins or die in the Lord." Preaching that demand a verdict.
Exposition
The message arose from a thoughtful engagement with the text, but its precise structure was not dictated by the shape of the verses in question. Lloyd-Jones grasped the communicative action of the text and preached it.
Theology
The preaching was a declaration of the biblical doctrines of God, sin, death, judgement, salvation and glory.
Illustration
No stories as such, but the sermon was full of references to matters of contemporary concern, such as nuclear war and politics. It was made concrete by the preacher speaking of the things of ordinary life like  marriage, music and drinking. He gave a compelling description of a man dying in sin, all alone and heading for judgement.  Who would want to die like that? And an equally compelling description of a man dying in the Lord, accompanied by the angels and heading for inexpressible joy in the presence of God. Who would not want to die like that? Quotes from several well known hymns and allusions to some Bible characters provided further illustrative materials.
Urgency
No hearer could be in any doubt that the preacher meant business. Eternal issues at stake. Logic on fire for the salvation of the lost.
Noble negligence
One could tell that the preacher was improvising from an outline rather than reading from a script. Some hymns were slightly misquoted. Balaam's saying, "Let me die the death of the righteous" became, "Let me die the death of the godly." Preaching isn't meant to be a polished address, but a living engagement between a man and a congregation in the presence of God.
Eloquence
Lloyd-Jones was an orator-preacher not a chatty conversational speaker. In places he raised his voice and quickened the pace in floods of gospel-inspired, passionate eloquence. Utterly, spine-tinglingly captivating.
Unction
Even listening to a recording of this message it is evident that Lloyd-Jones was preaching in 'demonstration of the Spirit and power.' I once offered this definition of the work of the Spirit in preaching,
"The Spirit’s empowering presence enables preachers to proclaim the Lord Jesus with boldness, liberty and life-transforming effectiveness. His presence makes preaching an event where the God of the gospel is encountered in all the fullness of his grace and power."
If you want to know something of what that feels like, then listen to this sermon included in Lloyd-Jones Messenger of Grace.
Lessons
There are no doubt many things I can learn from hearing from Lloyd-Jones' preaching. But I think the main thing is summed up in the preacher's own words on the Holy Spirit in preaching,

I am certain, as I have said several times before, that nothing but a return of this power of the Spirit on our preaching is going to avail us anything. This makes true preaching, and it is the greatest need of all today - never more so. Nothing can substitute for this.

This 'unction', this 'anointing', is the supreme thing. Seek it until you have it; be content with nothing less. Go on until you can say, 'And my speech and my preaching was not with enticing words of man's wisdom, but in demonstration of the Spirit and power.' He is still able to do 'exceedingly abundantly above all that we can ask or think'. (Preaching and Preachers, Hodder, D. M. Lloyd-Jones,  p. 325)

I've listened to a few sermon series by Lloyd-Jones, often in the car whilst driving. My children refer to him as "the man who speaks funny", and indeed for one not used to it his Welsh accent is at first a difficulty, but once one gets "into the groove" of it he becomes quite rivetting (and it's interesting how quiet they become in the back seat when he is "on").

I concur with every point of your analysis, Guy, it is spot on.
As for his sermon structures, yes, I can always see where he's headed but I enjoy being taken there nonetheless.
I think L-J once said "a good preacher gets on fire for the Gospel and people come to watch him burn", and there can't be too many better examples of this than the doctor himself, although I would say he bruns slowly and contsantly.
No wonder they called him "the last puritan". Only the occasional blaring siren from the street outside that the microphone picked up, and those contemporary settings he speaks into, make one realise one has not been transported back to the 17th century.

That should read "burns slowly and constantly"...sorry about that!