Than which nothing greater can be conceived? A Christo-Ontological proposal 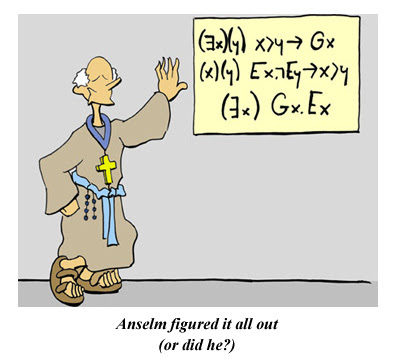 The so-called "Ontological Argument" was formulated by Anselm. He reasoned that as human beings have a conception of a perfect divine being than which nothing greater can be conceived, then that perfect divine being must exist, otherwise where would the idea of his existence come from? It is fair to say that his argument is not the most convincing when it comes to persuading sceptics of the existence of God. Indeed, it is deeply problematic in a number of ways. It begins with a human conception of God and reasons up to the actual existence of a divine being. Thus it lays itself open to Feuerbach's objection that belief in God is nothing more than the projection of human consciousness. In that case, theology is simply bigged up anthropology. So also Freud, who posited that belief in God is the expression of the need for father figure.
Even for Christians Anselm's Ontological Argument is less than satisfactory. It starts with man's idea of the divine rather than with God's self-revelation in creation and redemption. Also, while some might find Anselm's argument sufficient to convince them that some kind of supreme being exists, why should that supreme being be necessarily be identified with the the God and Father of our Lord Jesus Christ? The supreme being may be a deist divinity, or Allah, or The Force, or who knows? Only by rather arbitrarily  supplementing his argument with the revelation of God in Holy Scripture could Anselm say that the supreme being greater than whom nothing can be conceived is the Lord God Almighty.
It is far better to begin with the presupposition that God is there and he is not silent. God has revealed himself in creation, providence and redemption. As his image bearers, human beings have an in-built sense of God, although the sensus divinitas may be suppressed and ignored due to the noetic effects of sin. Knowledge of God the Redeemer is revealed in Jesus Christ, the Word made flesh for our salvation by the power of the Holy Spirit. Holy Scripture records and interprets the redemptive acts of the God. But the Bible gives us far more than information. In Holy Scripture we have the communicative action of the triune God. Here God the Father speaks through his Son by his Spirit in order to incorporate his people in drama of redemption. The Speaking God is Creator and Redeemer. That is the basic starting point for Christian belief.
Where then does all this leave old Anselm and his Ontological Argument? When used to try and prove the existence of a "bog standard" god it isn't up to much. But when set within the context of God's self presentation in Holy Scripture, it might have some persuasive power. However, this is not because it is possible for the unaided human mind to envision the God of the Gospel. The revelation of God given in the Bible is far greater than could ever be conceived by man. We never would have had an inkling of it apart from God making the mystery of the Gospel known through the prophets and apostles of the Old and New Testaments. Who would have posited that God so loved the world that he gave his one and only Son that we might not perish but have everlasting life? Who could have thought that he who was the form of God would humble himself and take the form of a servant? Who might have imagined that the Lord of glory would willingly lay down his life for our sins, offering himself up to God through the eternal Spirit? Only by divine revelation could we ever come to realise that God is as wonderfully gracious as that, 1 Corinthians 2:6-10.
By his Ontological Argument Anselm hoped to give a reason for belief in a supreme being. As such his argument is scarcely persuasive. But perhaps there is some mileage in a Christo-Ontological Argument that is rooted in the witness of Scripture. God is there and he is not silent.  The God of the Gospel's being is in his communicative act. In these last days he has spoken by his Son.  "The Word became flesh and dwelt among us, and we beheld his glory" (John 1:14). God with us as one of us. He stooped to take the burden of our guilt upon himself to set us free. Such things angels desire to look into and they should never cease to astound us and leave us gasping with amazement. The Gospel is so gloriously divine. You couldn't make it up. Nothing as great as the revelation of God in Christ could ever be conceived unless God had made it known.

O what matchless condescension
The eternal God displays,
Claiming our supreme attention
To his boundless works and ways;
His own glory
He reveals in gospel days.

In the person of the Saviour
All his majesty is seen,
Love and justice shine for ever;
And without a veil between,
We approach him,
And rejoice in his dear name.

Would we view his highest glory,
Here it shines in Jesus' face;
Sing and tell the pleasing story,
O ye sinners saved by grace;
And with pleasure
Bid the guilty him embrace.

In his highest work, redemption,
See his glory in a blaze;
Nor can angels ever mention
Aught that more of God displays.
Grace and justice
Here unite to endless days.

True tis sweet and solemn pleasure,
God to view in Christ the Lord;
Here He smiles and smiles for ever;
May my soul his name record
Praise and bless him,
And his wonders spread abroad.

Email ThisBlogThis!Share to TwitterShare to FacebookShare to Pinterest
Labels: apologetics

Good thoughts. I'm in the middle of reading Anselm's major works, and I agree with your assessment. On the whole, I find him a fairly unconvincing theologian. (He's decidedly not a biblical theologian.) His project is explicitly bent on arriving at biblically revealed truth via reason and logical inference, and I find myself often disagreeing with his starting assumptions. His Monologion and Proslogion are good examples of his logic chopping. And I'm finding his Why God Became Man little different.

As to your point that, "The Gospel is so gloriously divine. You couldn't make it up. Nothing as great as the revelation of God in Christ could ever be conceived unless God had made it known."

I agree. And I think this is where Anselm rings a bit hollow for me. One senses that it is all very reasonable to him.

I think Anselm is doing something pretty subtle. He is not trying to speculate upwards to God but trying, given faith, to understand how we might think about faith. The moniker 'than which nothing greater can be conceived' is an empty concept which reflects the unthinkability of God - precisely to avoid the things you say, as I read it.

I also would disagree, especially about Anselm's goal - he was in no wise attempting to prove God's existence in an apologetic sense. Rather, he was engaging in a 'faith seeking understanding,' that is, the logical analyzing and thinking about the self-revealed God. He isn't trying to reach biblical truth without the bible, but rather taking the bible's revelation as a presupposition.

Barth's thesis about Anselm is similar, though it opposes the appropriateness of natural theology, where I would say it is appropriate in the sense that it is based on God's own self-revelation rather than an independent method of finding God.

Thanks for your comments, gentlemen. If what Jon & Phil say is right, and the OA was an expression of Anselm's "faith seeking understanding", then maybe what I was trying to say isn't too far apart from the great man's original intention.

I agree that Anselm's stated theological method is "faith seeking understanding." A great perspective in my mind. And in this sense, perhaps, his overall project is not apologetic (which I never said it was).

But even so, he seems to have a pretty high view of reason and its ability to arrive at revealed truth. For instance, note the opening paragraphs of his Monologion:

"Now take someone who either has never heard of, or does not believe in, and so does not know [about God and his existence], or indeed any of the numerous other things which we necessarily believe about God and his creation. I think that they can, even if of average ability, convince themselves, to a large extent, of the truth of these beliefs, simply by reason alone.... he can at any time turn the mind's eye to look for the source of the things that are good...In this way, then guided, by reason, he may make rational progress towards what he, unreasoningly does not know."

Regardless, my main critique is that (even within his "faith seeking understanding" paradigm) his theology relies too heavily on building a chain of logical propositions. Note for instance, his belief that it was God's plan to replace the fallen angles through the human race. This assertion is quite obvious for Anselm because "it should not be doubted that reasoning beings...exist in a rationally calculated and perfect number known in advance by God, and that thus it would not be fitting for it to be greater or less." His work is full of these sorts of logical connections.

Of course, I don't think we (I) need be too hard on him, in as much as this was the manner of theological discourse customary to his day.

But I think I'm sounding harder on Anselm than intend. He was a great theologian, and I very much appreciate the devotional "drive" behind his theology. He is a true ecclesial theologian. I just wish he had grounded his theological project more in biblical theology, rather than analytical theology.

And thanks for the note about Barth's interaction with Anselm. I look forward to checking that out.

This is not his argument. His argument is something like the following, a reduction ad absurdum on the proposition "God does not exist":
(1) God is that than which none greater can be conceived. (note: this premise does NOT say we can know all there is to know about God through reason, only that we cannot conceive a being greater than God)
(2) God exists in the imagination (that is, humans, when they hear the word 'God', understand the word to refer to some being than which none greater can be conceived).
(3) A being that exists in reality is greater than one that exists in the imagination alone.
(4) God does not exist in reality.
(5) We can conceive a being greater than God; namely, one that exists in reality and in the imagination.
(6) But 5 contradicts 1, and thus 4 is also false, and God exists.

The above sketch has been reformulated with greater sophistication by Plantinga as an argument for a maximally great being.

Whether or not it is impious, it is wrong to claim that Anselm simply argues that God must exist because otherwise there is no explanation for the "idea" of God's existence.

One's best best, IMO, is to deny premise (2); but even (2) is quite plausible. At any rate, the problem is quite thorny and is still debated in top philosophy journals.

Barthian critiques like yours need to at least take Anselm's actual argument seriously for what it is; only then can it be evaluated.