On my way to heaven by Mark Ashton 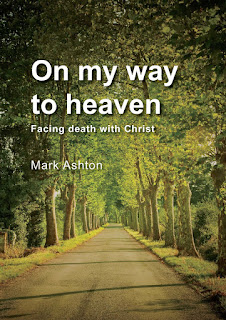 On my way to heaven: Facing death with Christ,
Mark Ashton, 10 Publishing, 2010, 26pp
Last Saturday we travelled to Harrow to visit my wife's father. He is dying cancer. It was sad to see him looking so weak and ill, but he is a Christian and is able to face the future with hope. This booklet was written by a man in just such a position. Anglican Vicar, Mark Ashton was diagnosed with inoperable and untreatable gallbladder cancer. He was given six to nine months to live. Here he tells the moving story of how he faced death as Christian believer.
Ashton reflects on his sadness at the thought of being torn from loved ones and the indignity of physical deterioration. With touching honesty he speaks of his character faults and besetting sins. Knowing that he was dying gave the writer a greater urgency in speaking to the lost of Christ and made him more determined to live for the Lord and walk closely with him.
What shines through above all is the way the resurrection of Christ enabled Ashton to confront the grave with hope. Not for him the empty bravado of My Way or the weak sentiment that the dead are "just in the next room". With biblical realism the writer saw death as "the last enemy" that severs body from soul and cuts us off from the land of the living. But this devastating foe has been defeated by Jesus. He  died and rose again so that all who believe in him might be forgiven and have everlasting life. Those who are united to Christ by faith will be raised immortal by the resurrection power of the Saviour.
This is an ideal booklet to give to anyone with a terminal illness. In these pages the non-believer will encounter the reality of the Christian hope. The believer will have his or her faith strengthened as they read the writer's testimony of God's grace to a dying man. I'll be sending my review copy to my father-in-law.
Avaliable from 10ofthose.com at 1 for £1.50 or 10 for £10.
Posted by Guy Davies at 9:25 am

The latest Evangelicals Now carries an obituary for this brother - absent from the body, present with the Lord. To borrow from Piper, Mark Ashton did not waste his life.

Luke 9:29 And as he prayed, the fashion of his countenance was altered, and his raiment was white and glistering.
9:30 And, behold, there talked with him two men, which were Moses and Elias:
9:31 Who appeared in glory, and spake of his decease which he should accomplish at Jerusalem.