Did Jesus leave his throne when he became Man? 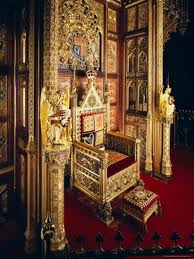 Christmas carols often claim that the Son of God "left his throne" when he became man. A few examples,
There was no room in Bethlehem
for Him who left his throne
Thou didst leave Thy throne
and kingly crown
The Lord of hosts, the God most high,
who quits His throne on earth to live
The trouble is that I'm at a loss as to what all that is supposed to mean. When he became man, did the Son abdicate his role in the lordship of the Trinity, ceasing to rule the cosmos together with the Father and the Holy Spirit? What does such a construction do to our doctrine of the Trinity? Besides, Scripture bears witness to the fact that the Son was involved in upholding and guiding the universe before and after he was made flesh, Colossians 1:15-17, Hebrews 1:3. And Hebrews 1:8, citing Psalm 45:6-7 insists that the Son's throne is "for ever and ever".
The nearest Scripture gets to the idea that Christ "left his throne" is in using spatial language to describe the incarnation. In the Gospel According to John Jesus often testifies that he came down from heaven to earth, John 3:13, 6:51. But even here, we need to understand that this language is figurative, accommodated to our capacity as creatures constrained by space and time. Being of the same divine essence as the Father, the Son is omnipresent. He was not shorn of his immensity when he became Man. In the words of Augustine, Jesus  became was he was not - fully human, without ceasing to be what he was - fully God. The one who was born in Bethelem  was at one and the same time filling heaven and earth, unconstrained by the restrictions of created space. When Scripture speaks in terms of the Jesus coming down from heaven, this language is intended to convey the dazzling height from which he stooped when the Word was made flesh.
But still, even as he was born of woman, born under the law, Jesus was the sovereign Son, ruling over all things together with the Father and the Holy Spirit. Rather than depicting Christ as surrendering a throne at the incarnation, the bible insists that he came to claim his crown as the Redeemer-King of the people of God, Isaiah 9:6-7, Luke 1:31-33. The incarnation was not an act of dethronement for the Son, but of further enthronement. Because he who was the form of God took the form of a servant and became obedient to the death of the cross, God exalted him to his right hand in glory.  Jesus is the Lamb in the midst of the throne, worthy to reign because he redeemed us to God by his blood, Acts 2:36, Philippians 2:8-11, Revelation 5:5-6, 9-10.


Well might angels sing in wonder
as they herald forth his birth;
even they can scarcely ponder
why God's Son came down to earth.
See Him now, enthroned in glory,
earth awaiting His return.
While our hearts recount the story
may these hearts within us burn.
(Graham Stuart Harrison)
Posted by Guy Davies at 8:27 am

Interesting. I've never read more into it than 'thou didst leave heaven and come to earth'.

I have no problem with the way you put it, but the idea of Christ leaving his "throne and kingly crown" suggests the abdication of sovereignty.

Great reminder. I find it difficult to really get my mind around Jesus as human. There are difficult questions here.Saying he left his throne isn't totally accurate but then we run into questions like, "How did he REALLY suffer if he gave up nothing?"

Someday we'll know all of this.

Very helpful - thank you. With the comment of Waldean in mind, isn't Phillippians 2v6 helpful? 'though he was in the form of God, did not count equality with God a thing to be grasped (or something he could use for his own advantage). The gospels are clear - he was fully human and his sufferings (spiritual and physical) were real. The gospels are equally clear that he was also fully God and had the power and authority to avoid it.

There is indeed great wonder here!

Yes, the Son suffered and died for us in his humanity. That was the purpose of the incarnation, Heb 2:9.

Instead of leaving His throne behind in heaven, is there not some truth in saying that He actively took His Heavenly throne with Him - as is seen in His statement to certain towns, villages and cities - "the Kingdom of Heaven has drawn near to you". This statement was then demonstrated through the exorcism of demonic spirits, the healing of the sick, the raising of the dead etc. However, He also demonstrated His kingliness by coming "in the form of a servant, being born in the likeness of men. And being found in human form, he humbled himself by becoming obedient to the point of death, even death on a cross." (Phil 2:7-8, ESV). He demonstrated His throne by the judging of sin, death and Satan on the cross, with an attitude of humility and submission to His Father. This was not a lessening of His divine attributes - God cannot become less God. The Eternal Son also became the "Son of Man" - but did not cease to be the Eternal Son (the Second Person of the Trinity) in doing so.

John Pipson said...
This comment has been removed by the author.
9:30 pm

God will never leave his throne, he always present in heaven as most high God and to be worshiped but his presence like HolySpirit, Jesus Christ,the one who eat food at Abraham house or the one who fighted with Jocob.

I like to say he left his throne,without getting up and was already there when when he arrived because he is omnipresent.So much about God is a,mystery and amen.ò