Something extra from Calvin for Christmas 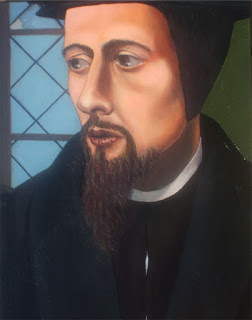 In his book, John Calvin's Ideas, (Oxford, 2004), Paul Helm devotes a chapter to The Extra (p. 58-92). Helm defines Calvin's extra, or the extra Calvinisticum like this: "the view that in the Incarnation the Son retained divine properties such as immensity and omnipresence and therefore Christ was not confined within the limits of a human person". It would have been better for Helm to have said, "within the limits of a human nature", but I'll let that pass for now. The main point is that Calvin was especially clear on the fact that the enfleshment of the Son entailed no change in his divine being,

They thrust upon as something absurd, that if the Word of God became flesh, then he was confined  in the narrow prison of an earthly body. This is mere impudence! For even if in his  immeasurable essence the Word was united with human nature into one person, we do not imagine that he was confined therein. The Son of God descended miraculously from heaven, yet without abandoning heaven. He was pleased to be conceived miraculously in the Virgin's womb, to live on the earth, and hang upon the cross, and yet he continually filled the world as he had from the beginning. (Institutes II:13:4).

As Helm points out, Calvin's "extra" was not in fact distinctive to the Reformer at all. A similar emphasis can be found in Athanasius, Augustine, Aquinas and other notable Doctors of the Church. Here is Augustine,

And we think that something impossible to believe is told us about the omnipotence of God, when we are told that the Word of God, by whom all things were made, took flesh from a virgin and appeared to mortal senses without destroying His immortality, His eternity, or diminishing His power, or neglecting the government of the world, or leaving the bosom of the Father, where He is intimately with Him and in Him! (Letter to Volusian, cited in John Calvin's Ideas, p. 59).

Also along these lines, my attention was recently drawn to a hymn by Joseph Hart (1712-68),
1    The Lord that made both heaven and earth,
And was himself made man,
Lay in the womb, before his birth,
Contracted to a span.
2    Behold, from what beginnings small
Our great salvation rose;
The strength of God is owned by all;
But who his weakness knows?
3    Let not the strong the weak despise;
Their faith, though small, is true;
Though low they seem in others’ eyes,
Their Saviour seemed so too.
4    Nor meanly of the tempted think;
For O what tongue can tell
How low the Lord of life must sink,
Before he vanquished hell?

5    As in the days of flesh he grew
In wisdom, stature, grace,
So in the soul that’s born anew,
He keeps a gradual pace.

6    No less almighty at his birth,
Than on his throne supreme;
His shoulders held up heaven and earth,
When Mary held up him.
Posted by Guy Davies at 11:57 am