On listening to Mendelssohn's Elijah 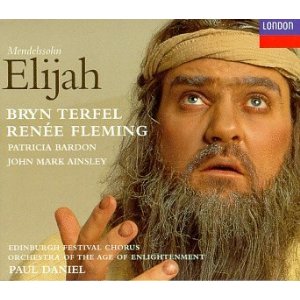 Augustine once said, "I want to know God, my soul and nothing else." When asked what music I like, I often reply, "I listen to William Williams, Radiohead and nothing else." Admittedly that's a bit of an exaggeration, but what I mean is that I don't much like what passes for contemporary Christian music. By that I don't mean hymns by modern writers like Stuart Townend, you understand, but Phatfish and stuff like that. Not that I've listened to a lot of Phatfish. In fact I can't remember ever doing so. But that's beside the point. I don't like their music in the same way I don't like custard and that's that.
I enjoy listening to hymns, whether old or new, Radiohead, Coldplay etc and nothing much in between. But even that isn't an especially accurate reflection of my musical tastes, because I'm also partial to a bit of classical music; Mozart, Beethoven, Brahms, Mendelssohn, Sibelius, Bruch, Elgar, Mahler, Shostakovich, the usual stuff.
Anyway, on Sunday I preached away at Cheltenham Evangelical Free Church. I went on my own and fancied listening to some music while driving. Being a it of a Sabbatarian I don't play Coldplay on the Lord's day, or even Radiohead, so I dug out my copy of Mehdelssohn's Elijah. Welsh bass baritone, Bryn Terfel sings the part of the eponymous prophet, accompanied by the Orchestra of the Age of Enlightenment under the baton of Paul Daniel. Being on my own I could turn up the car stereo really massive loud, which I can't usually do because it gives my wife 'a headache'.
I had played the CD many times before, but the effect of listening to Elijah on full blast really blew me away. Mendelssohn's oratorio brilliantly captures the highs and lows of the Elijah's ministry, from his triumph at Mount Carmel to his despair at Horeb, the mountain of God. Terfel is amazing in the lead part, singing with great skill and a deep emotional empathy for the prophet. You  sometimes feel that he is almost sing-preaching, as he thunders against the prophets of Baal.
It all ends by directing the listener to a new Elijah, in the form of John the Baptist with an allusion to Malachi 4:5-6 cf. Luke 1:17. Of course, John the Baptist's role was to point people to Christ. The libretto picks this up, having the chorus sing a catena of biblical quotations, including Isaiah 41:25, 42:1 & 11:2. A quartet exhorts the listener to come to the Lord, Isaiah 55:1, 3, before the chorus concludes the piece with a rousing doxology, "Thou fillest heaven with thy glory. Amen."

Mehdelssohn's Elijah ends where Handel's Messiah begins, with John the Baptist as a new Elijah, preparing the way for the Lord. Mehdelssohn's tremendous Elijah serves as a forerunner for Handel's more excellent Messiah.
I know that the Latin for "take and read" is toll lege. I don't know what the Latin is for "take and listen" so I'll just have to say it in English. Take and listen to Mendelssohn's Elijah. If you've never done so before, what are you waiting for? If you have do so before, do it again. Soon. You can catch the Terfel version on Spotify.
Posted by Guy Davies at 8:00 am

I have the same recording and agree it is superb; I shall retrieve it from where it is stored and listen again, with your encouragement.

I too am a bit of a sabbatarian when it comes to Coldplay, but that also applies to most other days of the week. I do think the great merit of Coldplay is that once you've heard one of their songs you don't have to go to the trouble of listening to the others.

On Stuart Townend and his ilk I have to part company, as I can't help remembering the cautionary tale of the Trojan Horse.