Tom Holland on 'Dominion' at Bristol Festival of Ideas 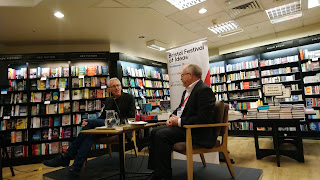 A few years ago when our children (now twenty somethings) were still children, we holidayed in Carmarthen. We saw Toy Story 3 in the cinema, so it must have been summer 2010. I'd finished my 'holiday reads' and was on the look out for another book. On the shelves of history section at Waterstones I spied a bright orange volume with gold lettering, Rubicon: The Triumph and Tragedy of the Roman Republic by Tom Holland. I'd never heard of him, but there was something about the subject  that grabbed me. The schoolboy Classical Studies O Level student was evidently the father of the man who bought and then devoured, Rubicon. And after that, Persian Fire, Millennium and Dynasty, all by Holland.

I enjoyed the author's sweeping, cinematic style and eye for telling (usually gory) detail. I sometimes wondered what it might be like if he turned his hand to Christian history; the origins of the faith and its impact on the world. So it was that yesterday evening the wife and I found ourselves in a Bristol branch of Waterstones to hear Tom Holland give an interview on his new publication, Dominion: The Making of the Western Mind. And the thing that according to Holland shaped the Western Mind was the Christian faith.

I say 'interview, ' it was more like a highly animated freestyle talk, with the flow interrupted and then redirected in its course by an occasional question. Holland explained how he came to write  Dominion and expanded on some of the key ideas in the book.

As a boy Holland was fascinated by the ancient Greeks and Romans. In their overweening power and brutality the Caesars seemed more like terrifying dinosaurs than men. But as he wrote Rubicon he found himself strangely repelled by their enormities. Julius Caesar slaughtered a million Gauls and enslaved a million more to get a name for himself and was duly acclaimed as a hero of Rome. We think, 'Not so nice.'

But why? It dawned on Holland that he viewed ancient Rome through Christian spectacles, or at lest through lenses that had been ground by two millennia of Christian history. The Christian faith inverted the values of antiquity. Suffering not slaughtering was heroic, weakness was strength, shame was glory. For at the heart of the Christian message was the belief that the Son of God took the form of a slave and was crucified for the sins of the world. The cross, which had been a brutal symbol of Roman power was transformed into a symbol of redemptive love. Christians proclaimed that this Jesus, risen and ascended, not Caesar was was world's true Lord. Their message brought down the lofty from their thrones and exalted the lowly.

The foremost exponent of the Christian faith was the apostle Paul. He grasped the universal implications of faith in Jesus. Through him the God of Israel would become the God of all peoples and all peoples would become one in Christ, Galatians 3:28. Holland thinks that Paul is a little ambiguous on how Jesus should be understood in relation to the God of Israel. I'd say that inserting him into the Jewish Shema (Deuteronomy 6:4), as he does in 1 Corinthians 8:6 makes it pretty clear that for the apostle Jesus should be included in the divine identity. (See God Crucified: Monotheism and Christology in the New Testament, by Richard Bauckham).

The teaching of Paul's New Testament letters sent seismic shocks rippling around the world and down the centuries to this present day. Paul explained that the old covenant in which the Ten Commandments were engraved on tablets of stone had gone. Jesus had ushered in a new covenant in which the law was written on the hearts of believers by the Spirit. Even non-Christians had the 'works of the law' written on their hearts, giving them a sense of right and wrong. Paul helped develop the idea of the conscience as an inbuilt moral arbiter. Unlike in Islam you didn't need a direct divine command for every rule and regulation in society. Man-made rules based on 'the light of nature' would do. This helped to pave the way for Western secular states, subject to the rule of human law.

As we were in Bristol it seemed fitting that slavery got a mention. Slavery was regarded as a normal part of life in ancient times. It was rife in Greece and Rome. Vikings used Bristol to transport the English slaves they had captured. The city made its wealth as port for the Transatlantic Slave Trade. Nowadays slavery is regarded as an abominable infringement of human freedom and dignity. Such is the taint of association with the slave trade that there are calls for Bristol's Colston Hall to be renamed. How do we account for this change in attitude towards slavery?

The Church Father Gregory of Nyssa preached against slavery in the strongest terms.  But it wasn't until the 18th century that Christians more widely began to grasp that slavery was an intolerable evil that had to be stamped out. Are not all men made in the image of God? Did not Christ die the death of a common slave to redeem us from slavery to sin? Quakers and Evangelicals threw themselves into the campaign for the abolition of slavery, championed by William Wilberforce.

Protestant England persuaded Catholic France to follow suit, arguing not so much from biblical principles as did the Evangelicals, but appealing to the Roman idea of 'human rights'. This universalising tendency was extended further as British imperialists sought to pressurise Islamic countries to abolish slavery, this time appealing (with little basis) to Muslim texts. And so the idea of culture-transcending universal human rights, so beloved of liberals and neo-conservatives alike was born.

Drawing upon the Reformation teaching on the witness of the Spirit to the truth of the Bible, Evangelicals would speak of the enlightenment of the Spirit that gave them fresh insight into Scripture. This enlightenment had a transforming effect on their personal lives and led to attempts at reforming society, the abolition of slavery being one example. A line can be traced from Medieval reform movements, to the Reformation, to the Evangelical Revival. But these were movements to reshape the church and the world in line with the Christian faith.

In the 18th century others proclaimed a new age of Enlightenment, not because they understood the Bible in a new way, but because they rejected it in favour of science and reason. The object of their reforming zeal was an overmighty church that had to be cut down to size so that people could be set free from oppression. As Holland pointed out, the irony was that Enlightenment rationalists had bought into the Christian idea of pulling the lofty from their thrones and exalting the lowly. They took that a little too literally in Revolutionary France. Similarly, today's woke lefties with their hierarchy of oppressed victims are, consciously or not, drawing upon a faith that has Jesus 'crucified in weakness' at its heart.

I mentioned seeing Toy Story 3.  Apart from the Christian faith would we even have the Toy Story series, shot through as the films are with key values such as love and self-sacrifice? The Romans would have had Woody and Buzz slaughter all the 'enemy' toys, and then  each other as the vied for supremacy.

In the interview Holland made many more fascinating links between Christianity and the contemporary world, taking in figures as diverse as John Lennon, Nelson Mandela, and Richard Dawkins. But I'll leave it there, otherwise this report will end up as a book review before I've even read the book. I duly purchased a signed copy after the talk, so watch this space. [See here for the review].

One last thing. On a personal note, Tom Holland confessed to having a rather fluctuating Christian faith, with perhaps one breakthrough moment. When making a film on Islamic State he was close to an area where the Islamists had crucified people, much as did the Romans. The cross was an instrument of terror, the threat of which cowed people into submission. Under IS the cross had none of its Christian connotations as a symbol of self-giving love and forgiveness. That seemed to speak to Holland in a deep way, but I sensed he's maybe not quite there yet in terms of personal faith in Christ.

I was reminded of the time recounted in the Acts of the Apostles when the King Agrippa had Paul address his assembled court with Roman governor Porcius Festus in attendance. Paul, bound in chains, gave a well-argued defense his faith and conduct. Agrippa responded (in the Authorised Version at least), "Almost thou persuadest me to be a Christian." I think I can hear Paul's response echoing down the centuries and addressing Tom Holland, "I would to God, that not only thou, but also all that hear me this day, were both almost and altogether such as I am, except these bonds." (Acts 26:28-29).
Posted by Guy Davies at 11:34 am

Glad you were able to write this up Guy. Fascinating.