Don Carson on "What is Evangelicalism?" (1) 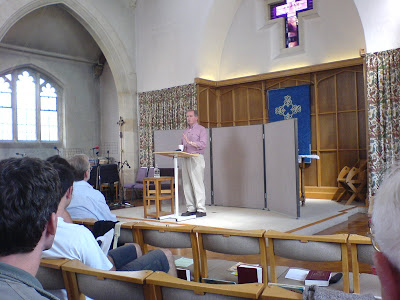 Today I attended a seminar led by Don Carson on What is Evangelicalism. It was held at St Bartholomew's Church, Bath under the auspices of Bath Word in Action. Here's a report of what he had to say:
Methodology
Trying to define evangelicalism is a complex affair. The word can mean different things in different countries and cultures. We need to bear that in mind. In addition, there have been a number of approaches to the task of defining evangelicalism. Some employ a sociological method. The views of all who call themselves evangelical are collated and synthesised to come up with the main features of evangelical belief and practice. Others prefer a more historical approach, such as David Bebbington in his well known Evangelicalism in Modern Britain. On the basis of his historical analysis, Bebbington proposed four defining features of evangelical Christianity, conversionism, activism, biblicism and crucicentrism.
Carson discussed whether we should employ a boundary-based or a centre-bounded perspective on defining evangelical beliefs. The first category clearly excludes all who fall outside of the clearly-defined boundary, while the second insists on harmony in the centre, while allowing for differences on the outer-edges of belief. He prefers centre-bounded evangelicalism.
Rather than try to define evangelicalism sociologically or historically, Carson proposed a Biblical and theological approach. He set out the formal principle and material principles that govern evangelical theology.
I. The Formal Principle
This, quite simply is the authority of Scripture. Holding the Bible as God's inspired and infallible Word is no late evangelical invention. The Bible's own self-witness as well as the testimony of the church throughout history acknowledges the unique authority and reliability of Scripture. This "norming norm" must be what defines evangelical or gospel Christianity, not sociological or historical factors. But the formal principle is not sufficient on its own, which brings us to...
II. The Material Principle
This is nothing less than the gospel to which Scripture bears witness. Carson focused our attention on 1 Corinthians 15:1-19 to set out the essential components of the Biblical evangel. He did this using eight defining words and five clarifying sentences. I will simply give his headings with a little comment. This, according to Paul is what is of first importance - the gospel which he proclaimed of Christ crucified for our sins, buried and raised from the dead.
1. The Gospel is Christological
Wherever we look in the New Testament, Christ - his Person and work are central. Christ died and was raised the third day. He has been appointed the Last Adam and the world's true Lord.
2. The Gospel is Theological
Christ died for our sins. Sin is a theological category because God is always the most offended party when sin is committed. This takes us back to the fall and forces us to face up to God's wrathful response to sin. Carson traced the theme of God's judgement through Scripture, culminating in the apostolic proclamation that God will judge the world through the risen Jesus (Acts 17). Any account of the gospel that minimises sin and God's wrath is badly deficient. Without this backdrop we cannot understand Christ's propitiatory work.
3. The Gospel is Biblical
Christ died, was buried and raised according to the Scriptures, Paul insisted, which brings us back to our formal principle. It is the Biblical gospel that counts.
4. The Gospel is Apostolic
In the passage, Paul refers to the apostle's eyewitness testimony to Jesus' resurrection. He appeals to his own apostolic proclamation that was based on his sight of the risen Christ "as one born out of due time". The Corinthians received an apostolic gospel "so we preached and so you believed." The apostles teaching is normative for the church.
5. The Gospel is Historical
Not in the sense of a "natural" event in the historical process, but because the resurrection of Jesus was an act of God in history. This is a unique feature of the Christian faith. God has revealed himself most fully in the historical birth, life, miracles, teaching, death, resurrection and ascension of Jesus, the Son of God. We cannot meaningfully hold onto New Testament theology without this solid historical basis.
6. The Gospel is Personal
This is the gospel by which the Corinthians were saved and in which they stood (15:1). The gospel must be appropriated personally by saving faith in Christ.
7. The Gospel is Universal
Christ is the Last Adam (15:22, 47-50), he is the head of God's multi-ethnic new humanity. All who are united to him are delivered from sin and death in the first Adam. But all who are not united to him remain in their sin.
8. The Gospel is Eschatological
Salvation is the in-breaking of the future into the present. Believers are justified by faith now, ahead of the day of judgement and raised with Christ in anticipation of the resurrection of the dead. But the gospel is eschatological primarily because its trajectory is the final consummation of resurrection glory (15:50ff).
I'll leave the five qualifying sentences for another post. But even from the above sketch, it can be seen that to be an evangelical Christian is to embrace the good news of Jesus in all its wonderful dimensions. This part of Carson's address was demanding and exhilarating. He made little allowance for the "mixed" character of his audience, leaving some wishing that they had brought a dictionary with them to look up words like "eschatology", "epistemology" etc. But it was a bravura exposition of the gospel that froms the material principle of evangelical theology.
Posted by Guy Davies at 10:46 pm

I can heartily agree to those material principles. There's some really good stuff there. But I do find it more than a bit disingenuous to say that the gospel is universal but then to follow this by essentially saying that it's not.

This is one of the major internal inconsistencies within the history of the church. What is the extent of the gospel? Who are included in Christ? Is the gospel a potential reality for all that each person must actualize for him- or herself? Or is the gospel an actual reality for a protologically determined few from which the rest are simply excluded? Or is there another way to think about this that upholds the universality of the gospel (as Carson rightly notes) without making the actualization of the gospel dependent upon the individual?

Of course, I think there is a better way. In the meantime, I think the material principles (apart from Carson's content) are an excellent exposition of this gospel.

I'm glad you appreciated at lest some aspects of Carson's presentation. But I don't think that he was being disingenuous. The gospel is ethically universal. In the proclamation of gospel, Christ is also offered to all. But as DAC put it, The Gospel is Personal. The Corinthians were saved as those who received and stood in the gospel (15: 1&2). To reject the gospel is to reject salvation from the wrath and judgement of God.