Don Carson on "What is Evangelicalism?" (2) 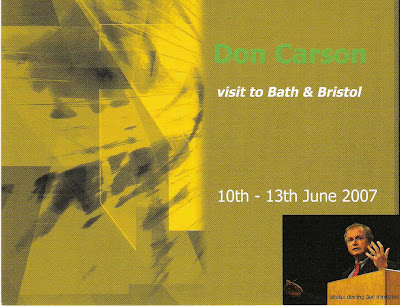 so what did he say about the anglican doctrine of the church? I am intrigued (if only to find out what it is!)

He said that Anglicans view the church in terms of the parable of the wheat and the tares. As the C of E is a national church, both godly "wheat" and ungodly "tares" are present in the life of the church. Anglicans in the congregation did not demur. But Carson holds that the Bible teaches that the church should comprise only of believers. The parable is about the kingdom, not the church. That was about it, really. He did not touch on church government issues. But over lunch he said that he once asked a certain Aussie evangelical archbishop how he justified his role from the Scriptures.

Ah - I wonder what the answer was!

Calvin and Luther held to the wheat and tares idea of course...

Luther regarded everyone in a Reformed district as a church member. But this caused him problems with church discipline. He proposed the formation of Ecclesiola in Ecclesia, little gatherings of the godly within the territorial church, but never carried it through. Calvin tried harder with church discipline. But still, all inhabitants of Geneva were church members by default, unless they proved to be unworthy.

The Puritans and Separatists argued for gathered churches of visible saints. This, I think is the more Biblical model. See how Paul addresses the churches Rom 1:7,1 Cor 1:2. Yes there were problems in the NT churches, but the assumption was that church membership should be restricted to believers.

Of course, my loophole is always that I don't belong to a national church because the Anglican Church in Australia isn't such a church!

Isn't puritan ecclesiology another way to over-realise the doctrine of the church?

I'm not sure that the gathered church view is over-realised. What's the problem with expecting potential church members to have a credible profession of faith before they join the church. In the case of a new believer, their understanding may be very basic, but they should at least confess that they have been saved by Christ alone. Should not present church members be living godly lives?

Of course, no local church will ever be perfect. This side of eternity, visible saints are also visible sinners.

Back to the over-realised bit, in a sense the church should be an eschatological community - a demonstration (albeit flawed), of the fellowship on heaven here on earth.

Going back to the church, of course it cannot be guaranteed that all members are bona fide believers. There were hypocrites in the NT church. Also, Christians are justified sinners. They ain't perfect yet. But the ideal is "The church called to be saints". Only those who make a credible profession of faith aught to be allowed to join the membership of a church.

When Church members are guilty of recalcitrant heresy or gross sin, they they should be excommunicated. There is no room in church life for "let the tares grow". Paul did not take that attitude in 1 Cor 5.

Fascinating stuff, both in your original post, and in your interaction with Michael. I'm looking forward to hearing the CDs, but couldn't find any info on them through the link you suggest...

The link just takes you to St Barts' site. I think that you can contact them via e-mail from the site. Try dropping them an e-mail re the CD's and see what happens. I'm afraid that I can't think of any other way of ordering the recordings. They will be well worth listening to.

Yes, I meant metaphorically we still have the wheat and tares situation. The Church visible is always a mixed entity, despite our best efforts!

Some interesting audio from Jonathan Edwards on these issues is available to download free from christianaudio.com this month. It includes Edwards' farewell sermon, and can be found here or via a link on my blog.

Is it legitimate to use Biblical metaphors in ways not intended by the text?

Thanks for the link. I'll have to follow that up. Did you get anywhere with St Barts & the CDs?

Guy
Re "He ought to come to the SW more often" - did you know that he is speaking at Cheltenham Bible Festival in August?
http://www.biblefestival.com/

Wow, I didn't expect him to respond to my wish that quickly.

(I knew really! But we will be going to the Aber Conference, so we won't be going to Cheltenham).

Ian Lewis, the Minsiter at St Barts e-mailed me to say that,

"People can get them by going onto the church website (via your link) and either either emailing via "contact" or using my email address on the Staff page. We'll then email back prices etc".