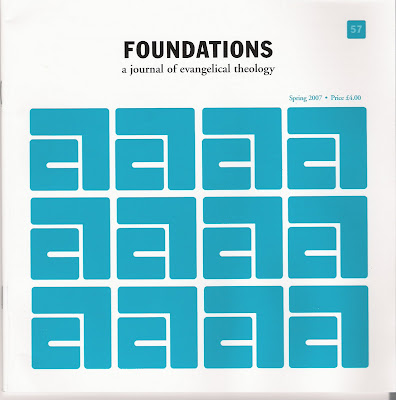 The latest edition of Foundations, features a number of stimulating articles and reviews. In my opinion, if pastors only subscribe to one theological journal, it should this journal of evangelical theology.
Mission in Europe: Biblical Basis and Cultural Context by Daniel Webber
This article discuses the Biblical basis for mission in the Old and New Testaments before probing the cultural context for mission in Europe. In conclusion, three main concerns are highlighted. First, we need to engage in a battle for truth in the mind of man. Second, in mission, our priority must be the proclamation of the gospel. Third, the church must think afresh about her role in the world as an authentic missionary community. Daniel Webber is Director of the European Missionary Fellowship. He writes with deep insight into the contemporary situation in the world and the church.
Roman Catholicism and the Evangelical Alternative by Leonardo De Chirico
De Chirico, an Italian pastor argues that Roman Catholic teaching says "Yes and no" to the gospel. "For example, Christ is told 'yes' but also 'no' because, in the Catholic view the prerogatives of the church end up by arrogating what belongs exclusively to Jesus Christ as Lord and Saviour." (p. 17). We do not simply disagree with isolated Roman dogmas, our problem is with the Catholic system that both affirms and denies the gospel of Christ. The evangelical alternative is an unhesitating "yes" to the Biblical gospel. Evangelicals must resist being absorbed by the ever expanding Catholic ecumenical project. The Evangelicals and Catholics Together initiative is a case in point. This important and timely article sets contemporary ecumenical rapprochement in the light of the gospel.
Why Study Biblical Hebrew? by David M. Green

Dr. Green, who teaches Hebrew at the London Theological Seminary explores some of the reasons why Hebrew is often neglected by pastors. He urges us to give fresh attention to this key Old Testament language. I must confess that my Hebrew has grown a little rusty over the years. But reading this challenging article had me reaching for my Hebrew textbooks for the first time in a while.

Man of Prayer by Keith Ives

Alexander Moody Stewart (1809-1898) was a Scottish minister who was mightily used of God during seasons of revival blessing in the Victorian period. Part of the secret of his success was that Moody Stewart was a man of prayer. This article is a great reminder that theological study and reflection should led us to the throne of grace. We cannot engage in mission, have the wisdom that we need in the face of ecumenical challenges or study the Bible in any language apart from humble reliance upon God. Moody Stewart often gave three directions to encourage reality in praying,

The old preacher was deeply versed in experimental Calvinism and was aware of his "absolute need of the presence and power of the Holy Spirit to make the word of God, whether read or preached effectual...In every service he prayed for the breathings of God's Spirit." (p. 33-34).

The God Delusion or the Dawkins Delusion? (Review Article) by Stephen Clark

Clark reviews Dawkins' infamous book The God Delusion. He points out the Dawkins' angry style of writing has even alienated atheists. Some of the book's factual errors are highlighted and a number of Dawkins' logical fallacies are challenged. Clark also considers The Dawkins Delusion by Alister and Joanna McGrath. The reviewer is appreciative of the work of this husband and wife team. They easily demonstrate the weakness of some of Dawkins' key arguments. The McGraths write from a theistic evolutionary perspective. Clark admires their sophisticated understanding of the history of the relationship between science and the Christian faith. He points out that creationist literature, often displays "a woeful ignorance of the history of Christian thinking on creation, and a lack of sensitivity the to the diverse literary genres found in Scripture." (p. 42.) This means that creationism is often dismissed as anti-intellectual fundamentalism. But, the reviewer wonders if the authors' theistic evolutionary approach is a 'Trojan Horse' in the evangelical camp. This accommodation to evolutionary theory may well have catastrophic consequences for our witness to the truth. We need an account creation and the fall that takes Genesis 1-3 seriously as historical narrative. But we also need to interact with the challenges raised by scientific ideas with intelligence and understanding. It has to be said that creationists have not always succeeded on this score. Stephen Clark is Minister of Free School Court Evangelical Church, Bridgend.
The Mission of God (Review Article) by Bill Nikides
This is an appreciative, but not uncritical review of Christopher Wright's book The Mission of God: Unlocking the Grand Narrative.
Foundations: a journal of evangelical theology, Spring 2007, no. 57, 47 pp, is published twice-yearly at £4.00 per issue by Affinity.
Posted by Guy Davies at 3:16 pm

Haven't read this journal, but i'm pretty sure it's David Green at the LTS, not Daniel - http://www.ltslondon.org/faculty.htm

Yes Matt, you are right. I've just corrected the post. An embarrassing mistake on my part because I know David personally.

Where on their website is the journal? They mention it's produced, but the page for the team who produces it has nothing on it.

Beats me, Sam. They haven't done a very good job of advertising the journal on the site. If you want more info, try e-mailing them from the contact page.