Patrick Sookhdeo on The Challenge of Islam 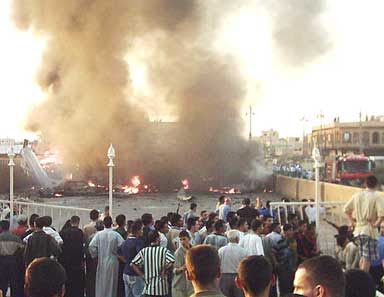 Christians car-bombed in Iraq
Yesterday evening, we hosted a Barnabas Fund meeting. The speaker was Dr. Patrick Sookhdeo, the Fund's director. His theme was The Challenge of Islam. Dr. Sookhdeo is a Christian convert from Islam and an expert on Islamic teaching. Here is a report of what he had to say.
1. The challenge of Islam to society
Patrick drew attention to a recent EU policy speech by David Milliband, the UK Foreign Secretary. Milliband predicted that by 2030 Europe will be struggling with forces beyond its own borders and facing the danger of religious extremism [read Islamic extremism] creating divisions on its own doorstep. Milliband's solution to the challenge of Islam is to allow Turkey to join the EU. But of this were to happen, Europe would by 47% Islamic by 2020. With the growth of Islam in the EU, non Muslims would be reduced to second class dhimmi status in their own countries. Islam is not simply a religion with spiritual goals. It aims at socio-political domination. In Islamic teaching, God rules the world by his law. There are the laws of nature and the Shari'a - or religious laws that govern the whole of life. Already UK governments have acted to allow Shari'a laws the affect pension and mortgage provision, education and prison foods. If further accommodations are made, life could become difficult for non-Muslims in Muslim dominated areas of the UK.
2. The challenge of Islam to the church
Churches that imbibed Liberal theology are slowly fading away. For example, it is predicted that membership of the United Reformed Church will fall by 62% by 2030. Britain has become a post-Christian, secular society where pluralism and consumerism reigns. Liberal theology, emptied out of biblical truth has nothing to offer. Islam, with its absolutist claims is filling the vacuum that was left by the decline of "Christian Britain". Muslims know what they believe, but many church leaders offer an uncertain vision. If the church is to have a future in the UK, we must return to biblical truth and hold to the historic Christian teachings on the Person of Christ and the Trinity. Also we need to recover a properly biblical eschatology that is focused on the return of the Jesus Christ as Saviour and judge. In Islamic eschatology Jesus will return and convert the world to Islam. We must boldly preach that when Jesus comes, he will vindicate the suffering Christian church and hold opponets of the gospel to account. On that day, all people, Muslims included will have to acknowledge that Jesus is Lord to the glory of God the Father. Only the robustly biblical theology of the Reformation will give the churches the doctrinal clarity and spiritual fortitude to rise to the challenge of Islam. Dr. Sookhdeo reminded us that while we may oppose the Islamic faith, we must treat Muslims with love and respect. But it is simply not right to say with some misguided churchmen, that triune God of the gospel is the same as Allah. Our task is to share the good news of Jesus with Muslim people. 3. The challenge to the church in the of Islamic world
Christians in the Middle East find themselves caught between Islam and the West. They are accused by their Muslim neighbours of siding with the West against Islam. Many Christians in Iraq have had to flee the country. There are now 400,000 Christian refugees in Syria. Believers are sent death threats by text and letter. They are warned that they must either conform to Islam and live under Shari'a law or die. Three Christian women were beheaded for refusing to wear the hijab. Under Saddam Hussein, believers were part of the Iraqi middle class, with many Christian Doctors. But now the Christian community suffers deprivation and poverty. Many who can afford to leave the country have done so. Christians are offered little protection by the authorities. A fourteen year old boy was crucified in Basra, where UK forces are at work.
The Barnabas Fund seeks to channel aid to suffering Christians, especially in Islamic countries. See here for details of the Save Iraqi Christians campaign. The Fund also helps to equip the churches to face the challenge of Islam. See here for a major new book, Global Jihad: The Future in the Face of Militant Islam by Patrick Sookhdeo. Please pray for the work of the Barnabas Fund. Visit their website to find out more about their mission. Should we not stand with the 1 in 10 Christians around the world who suffer for Jesus' sake?
"Therefore, as we have opportunity, let us do good to all, especially to those who are of the household of faith." (Galatians 6:10)
"But whoever has this world’s goods, and sees his brother in need, and shuts up his heart from him, how does the love of God abide in him?" (1 John 3:17)
Posted by Guy Davies at 9:37 am

Europe and, UK in particular, is facing an Islamist crisis because of their colonising many Muslim countries. These Muslims are from ex-colonies.

Muslims who revere this prophet as a perfect man would take after his example.