Phil Arthur on the Puritan Family 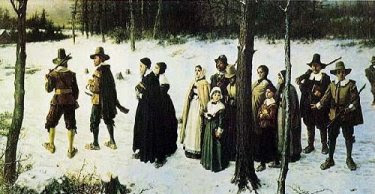 At Monday's Minister's Fraternal in Honiton, Devon, we had Phil Arthur speak to us on Puritan family life. He gave us a vivid picture of the Puritan view of marriage and child rearing through the eyes of a fictional couple, Richard and Abigail Adams. The Adam's family lived in Bedworthshire, England. We catch a glimpse the newly-weds in the early 1640's prior to the turbulent years of the Civil War.
1. Husbands and wives
In medieval Christendom, marriage was regarded as a second best option for those who wished to take their faith seriously. But the Puritans recaptured the Bible's healthy and positive teaching on married life. For them, marriage could be a stimulus rather than a stumblingblock in the quest for godliness. In the Catholic view, marriage was a necessary evil for the procreation of the human race. But the Puritans stressed that God has ordained marriage for the loving companionship of husband and wife, procreation and the prevention of sexual immorality, in that order. Puritan preachers devoted a lot of attention to the marriage relationship, focusing especially on Ephesians 5:22-6:4. Richard Adam's uncle bought him a copy of William Gouge's great tome, Domestical Duties as a wedding present. Gouge gave directions for conducting family worship and offered lots of practical advice on coping the stresses and strains of married life. Contrary to their caricature, the Puritans were not at all repressed and embarrassed by sexual intimacy in marriage. They positively reveled in marital love and Gouge urged couples not to deny one another the pleasures of the marriage bed. One of their favourite texts was Proverbs 5:18-19. Puritan preachers were against sexual immorality, not sex in itself. Indeed, a Puritan wife in New England reported her husband to their pastor for neglecting his "duties" in this regard. When the man still refused to sleep with his wife, the matter was brought before the whole church, who excommunicated him! Abigail Adams was glad that Protestant teaching elevated her from being little better than a baby factory. In the Puritan vision she was her husband's beloved and honoured companion. While the Puritans stressed male headship in the home, they taught that the husband should exercise his responsibilities with tenderness and grace.
2. Parents and children
Richard and Abigail were blessed with their first child, whom they named Richard in honour of his father. The lad was fortunate as the Puritans has a penchant for quirkily biblical names like Praise-God, Barabbas and Pharaoh. Puritan teaching regarded abortion as murder. Children were to be cherished as gifts from God and nurtured in godliness. Teachers like Gouge had no illusions about the innate goodness of children. They are born in sin and need discipline and correction. The Puritans knew the wisdom of the biblical injunction, "spare the rod and spoil the child". Children were to be educated and fitted for a useful calling, whether academic or practical according to aptitude. The great aim of Christian parenting was to bring children to trust in the Redeemer. Puritan families would meet daily for times of Bible reading, prayer and instruction. The father was a prophet who taught his family the Word of God, a priest who prayed for them and a king who ruled his own household well. The mother was to guide the home and care for her children. In a very modern touch, Gouge argued that mother's breast is best and discouraged the use of wet nurses.
3. Masters and servants
Wealthier Puritan households kept domestic servants. These were to be treated fairly and with respect by their masters. The domestics were to offer loyal service to their masters. All was to be done in accordance with the biblical teaching in Colossians 3 and Ephesians 6.
The paper concluded with Abigail being awoken to breast feed little Richard one cold December night. Her husband arose from his bed to place a blanket around his wife and their baby. "I love thee, my lass!" said Richard, "And I love thee too!" responded the tired, yet happy and contented young mum.
4. Discussion
Perhaps we have taken the traditional nuclear family for granted. We would to well to recapture the Puritan vision of marriage as an ennobling and liberating institution. Their Scriptural understanding of marriage is much to be preferred to today's casual attitude to adult relationships. We need to get rid of feminist inspired suspicion of marriage and work out a truly biblical pattern of godly family life. Of course, we should not try to ape the Puritans who developed their teaching in the context of a highly stratified and deferential society. We would not expect a wife to curtsy to her husband or a husband to bow in reverence to his wife. We don't have to worry about the servants overhearing our intimate conversations. But contemporary believers have much to learn from the Puritan's wise and practical teaching on marriage. In chatting to Phil after the meeting, I suggested that he develop the fictional Adams family into an historical novel. I hope he will.
Phil Arthur originally gave his paper on Puritan Family Life at the 1997 Westminster Conference. Drop me an e-mail for more details.
Posted by Guy Davies at 4:59 pm

What a lovely picture of marriage. And you are right, it would make a great book.

Just found your address and added it to my favorites.Great site look forward to reading back through the archives especially Puritan stuff.
(Phil Arthur originally gave his paper on Puritan Family Life at the 1997 Westminster Conference. Drop me an e-mail for more details.)
I wanted to e-mail you to see if I could get the whole article but could not find your e-mail address so thought I might be able to go this way.
Graeme

You can e-mail my by clicking on the link, "View my complete profile" at the bottom of the "About me" section of the sidebar. But the chap you'll need to contact for the complete paper is John Harris, the Westminster Conference Secretary: