Carl Trueman responds to Iain Murray on Packer and Lloyd-Jones 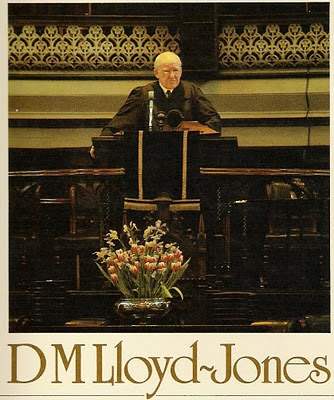 In the March edition of the Banner Magazine Iain Murray takes Carl Trueman to task for his contribution to J. I. Packer and the Evangelical Future: The Impact of his Life and Thought, (Baker Academic, 2009). Murray, Lloyd-Jones' official biographer charges Trueman with supporting slander against "the Doctor". Over at Reformation 21, Trueman responds to Murray's strictures, here.
Lloyd-Jones was one of the towering figures in 20th century Evangelicalism and his ministry did much to stimulate the recovery of Reformed doctrine in the UK and beyond. His writings had a massive effect on my own theological development. I believe that he was right to force Evangelicals to face up to the issue of ecumenical integration in 1966. But he was no infallible oracle whose every utterance may be quoted to end all argument almost 30 years after his death. One task that faces us is the critical appropriation of Lloyd-Jones' legacy. We need to learn what we can from him and press on to face the challenges of the present time. If the discussion between Murray and Trueman helps us to do that, all well and good.
Posted by Guy Davies at 9:02 pm

"If the discussion between Murray and Trueman helps us to do that, all well and good."

Do you think it is helping us to do that?

Yes, I think that Trueman is raising some critical questions concerning the Lloyd-Jones legacy that need further discussion.

I think what would be helpful in this back and forth would be to separate the issues from the personalities. We must not get into opinions about MLJ or any other individual involved in the events of the past; what we do desperately need to do as evangelicals is figure out our doctrine of evangelical unity. I believe MLJ was right to call for separation but he failed to provide what the alternative should be. The story of the last fifty years of the evangelical church in England is our continuing failure to come up with the right answer. We need to be figuring out how we as evangelicals should come together, in a positive way. If this debate makes those who are in positions of influence come together to talk and develop an answer it will have been a good thing. We need to have this discussion for three reasons; 1. In towns and villages all over the country the next twenty years is going to see many small evangelical churches close. Evangelicals are currently scattered in small churches when if we could come together we might thrive. This changing situation means we need a new way forward. 2. I am a young man seeking to serve in ministry. I came out of ministry in Methodism seeking to serve alongside evangelicals. I find myself in a no man's land, a wasteland, where there is no evangelical church to join. When I came out, what was I supposed to come out into? We need to find a real unity. 3. There is a split coming in the Anglican church. Will we have a response ready as the evangelical church?

Some good points there, Matthew. Separation for its own sake was never Ll-J's vision. In the 1966 address his main aim was to argue that Evangelicals needed to come together on an inter-church level. How exactly we do that in the current situation is a matter that needs urgent consideration.

I believe that Lloyd Jones has some things to say of considerable importance and helpfulness to us today. The questions raised in 1966and 1967 are even more urgent now. If Lloyd Jones and others did not have an answer then, (although I am taking their side in this dispute) we may have to find one now. It may lie in a different place to where they were looking; that is organised formal evangelical unity through the BEC.

It has been good that we have seen a revival of Reformed theology, but if my reading of Murray's biography is correct, the most important thing that Lloyd Jones did was to consistently hold before professing evangelicals the question "What is a Christian?". This is a vital question to be asked continually by the church in each generation. In 1966 it seems there was a lot of confusion on this point made even greater in 1967 by the New Evangelical Anglican Congress.

I believe that Lloyd Jones has produced a significant body of highly relevant and helpful teaching on this subject. (Not to say biblical!)

The difficulty as I see it is that by failing to have a balanced critique of the man and his ministry, we have obscured his legacy and stopped our generation from benefitting from it. This is a great loss I think.

I feel that failure to provide a balanced view of Lloyd Jones has lead to a stiffling of emergence of new leaders of the church and that this has left the church weakened at a critical juncture as a result.

It seems to me that there was a time when minsters seemed to be divided along the lines of those who knew Lloyd Jones and those who did not, and this was a problem for some young men.

Iain Murray has written a fine and extremely helpful biography, but we do need a balanced critique of the doctor. This I hope will let the next generation benefit from The Doctor's very helpful writings.

I believe for the disagreement between Murray and Trueman to be beneficial it must be about the issues and not the persons. In assessing the doctor's legacy if it becomes about protecting the doctor or about being more critical of him, we have missed the point. The most important thing we need to discuss as evangelicals is the issues on which Packer and MLJ differed, not about the two men themselves. Perhaps there are some who are too protective of the doctor and some who are too critical. And certainly the situation today is very different than the one in 1966, although perhaps the issues are if anything more acute. But the point must be to look past persons to what is really important; the issues. Perhaps instead of assessing MLJ we need to be thinking about the issues?

From my limited understanding of the split between MLJ and others, there were two crucial issues, that are still unresolved today.
1. Where is the visible unity of the evangelical church? Surely there should be a visible unity amongst us and not just in some para-church organization, but in a functioning working body? The liberals are right when they criticize our disunity.
2. Surely the heart of MLJ's challenge to Anglicans is why would they choose to be in a visible church unity with professing heretics, instead of with other evangelicals? Is this not schism? As far as I have ever seen no Anglican has ever engaged and answered this question. This challenge remains today and if we become bogged down in discussion about who is misrepresenting who, it will remain unanswered.

"I believe for the disagreement between Murray and Trueman to be beneficial it must be about the issues and not the persons."

What if the issue is the person?

Yes, Lukas it isn't always easy to separate people from issues, especially when trying to learn the lessons of church history. In this case the hub of the matter is who was right on what Evangelicals should have done in 1966? Was it Lloyd-Jones with his separate and come together stance, or Packer with his integrationist position? If as I've argued elsewhere, Lloyd-Jones was basically right, then we need to ask how we might apply his principles to today's situation. I think this means:

1)Separation from the theologically mixed denomination is still a live issue.

2)Evangelicals should seek unite along ecclesiastical lines. Co-operating at the para-church level while remaining in mixed denominations won't do.

3) How Evangelical churches come together as an expression of unity in the gospel isn't easy to figure out given that Evangelicals differ over ecclesiology, baptism etc. Perhaps a loose affiliation of like-minded Evangelical Churches and Church groupings is the best we could hope for. How can Affinity be made to fulfil this role more effectively?

4) Separated Evangelical Churches will want to support Evangelicals in the mixed denominations who are fighting for reform rather rather than seeking integration. (Gospel Partnerships anyone?)

5 Should the loose affiliation of Evangelical churches (Affinity or whatever) be distinctly Reformed or merely Evangelical? I think we should work towards an affiliation of confessional Reformed Churches that is generous enough to allow for differences on ecclesiology, baptism etc. We need a little dose of realpolitik, or realecclesiastic. All Reformed Evangelicals are not suddenly going to become Presbyterians, Congregationalists, Grace Baptists or Calvinistic Episcopalians. Given that Reformed Evangelicals are never going to agree on church government and baptism, an affiliation of individual Reformed churches and church groupings is the best we can hope for. Trueman's charge of "doctrinal indifferentism" won't apply as the affiliation will be distinctly Reformed in its agreed confession.

As a practising Catholic I don't have a horse in this race, but I can appreciate some of the soul searching which you folks are going through in the midst of this ecclesiological debate.

Peace be with you