Catholic and Reformed by Anthony Milton 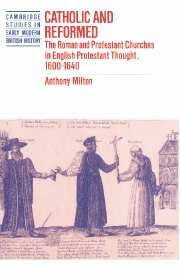 
I came across this book in a footnote in John Owen: Reformed Catholic, Renaissance Man by Carl Trueman (p. 18 n. 44 - reviewed here). Trueman commended Milton's detailed study of Protestant attitudes towards Roman Catholicism in the period before Owen's public ministry. When invited to give a paper on Puritan Attitudes Towards Rome at this year's Westminster Conference I thought I had better get hold of Catholic and Reformed for some background reading. Some background reading! Milton has carefully researched the voluminous anti-Roman writings published in England during 1600-1640. Part I of the book is devoted to the controversy with Rome.


The basic anti-Catholic consensus was shattered by Archbishop William Laud and those who agreed with his views. For Laud the main enemy was not so much Rome, as the 'enemy within' in the shape of the Puritans. Laudians acknowledged that there were serious errors in the Roman Catholic system, but they regarded Rome as a member of the true Catholic Church. Under Laud's tenure identification of the Pope as the Antichrist was discouraged and robust anti-Catholic polemics were suppressed in favour of a more irenic approach. Some Laudians such as Richard Montagu even hoped for reunion with Rome and worked towards that end.


In Part II Milton gives attention to the Reformed Churches, discussing the relationship between English and Continental Protestantism. While there was a good deal of confessional harmony between English Protestants and their European cousins, there were also tensions and difficulties. For a start Protestantism was divided between Lutherans and the Reformed, the two parties eyeing one another suspiciously. To make matters worse, Lutheran dislike of the Calvinistic doctrine of predestination seemed suspiciously similar to the Arminianism that was vexing the Reformed Churches in the early 1600's. The Church of England was moderately Calvinistic rather than Lutheran in its confession, but it differed from the European Reformed Churches on the issue of Presbyterianism. An earlier generation of Anglican leaders regarded episcopalian church government as a 'thing indifferent' that should not be allowed to disrupt harmonious relations between English and European Calvinists. But when Laud and his followers began to assert the 'divine right' of episcopacy, casting doubt on the validity of Presbyterian orders, the fragile united front began to break down. The Laudian doctrine of "No bishop, no church!" was hardly calculated to further the cause of Protestant unity. Indeed, with his rigid episcopalianism and dislike of Calvinistic theology, Laud actively distanced the Church of England from the European Reformed Churches. European Presbyterians seemed too much like those pesky homegrown Puritans for his liking.


What might be the relevance of all this for Evangelicals today? For one thing, Milton's work helps to provide a welcome historical perspective on current Evangelical engagement with Roman Catholicism under the auspices of Evangelicals and Catholics Together. Were our Protestant forefathers right to be so hostile to Roman Catholic teaching? Have the issues that divided Protestants and Roman Catholics in the sixteenth century such as papal authority, justification by faith alone, transubstantiation, and purgatory really been resolved? I think not. But that is not the only thing that strikes me. Another is the bitter divisions within Protestantism which left the movement badly fragmented and therefore weakened. Serious and irreconcilable differences emerged between Lutherans and the Reformed. The rise of Arminianism shattered the unity of the Reformed Churches. The divisive Laudian assertion of the 'divine right' of episcopacy is another case in point. Regrettably, even Protestants who were in basic agreement on theological issues managed to fall out over finer points of doctrine and church polity.


Now, I'm not trying to argue for the maintenance of pan-Evangelical Protestant unity at any price. The 'lowest common denominator' approach of modern day ecumenism is not one we should adopt at the expense of our Reformed confessional integrity. But still the challenge remains; how can we hold to our cherished distinctives as Reformed Baptists, Westminster Standard Presbyterians, Savoy Declaration Independents, or Calvinistic Episcopalians and yet give expression to our essential unity in the gospel? What more can be done to encourage confessionally Reformed Churches and Church groupings to affiliate and work together for the sake of the Kingdom? Yes, we still need to face up to enemies without such as Rome and theological liberalism. We also have to combat numerous enemies within what passes for Evangelicalism today. Take open theists and those who deny penal substitutionary atonement as a couple of examples. But in our tendency to fragment over secondary issues we don't exactly do ourselves any favours. We cantankerous Calvinists don't always have to be our own worst enemies, now do we?
Posted by Guy Davies at 8:00 am

Guy:
Once again I wish to thank you for getting into the fray between Catholics and Evangelicals. Yes, we affirm evangelical unity with all those who hold to biblical confessions (like those you cited, Savoy Declaration, Westminster Standards, etc.). And we read of great unity when God blesses the church via revival (1st & 2nd Awakenings). Those who truly love Jesus Christ want to proclaim Him without admixture of men's doctrines. However, as you have surfaced, there is a categorically dangerous delusion which has overtaken many formerly gospel conscientious men. Your post stirs the murky waters of the ECT with the stick of truth. This issue is far more deleterious than it would seem many in the protestant camp understand or are willing to admit.

I do not believe that Vatican II truly opened the way for unity, but merely baited the trap with something perhaps more enticing to a weakened protestant community. Rome has no interest in backing down from her supposed superior stance, waiting for all the stray daughters to return to her!!

Please keep it up. Your posts are a true blessing. May God's rich grace continue to enlighten you and all your readers as well.