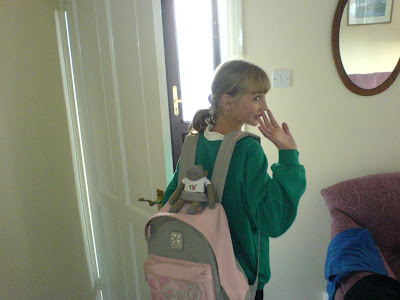 It was 8.20 once crisp, bright September morning. The awesome silence of Exiled Preacher's study was suddenly broken by a gentle knocking at the door. "What now?" I said in a kind and gentle way. "It's me, daddy.", said my darling daughter. "OK, come in.", sighed EP, not grumpy at all. "Daaaad" she began, "my teacher said that we could bring a cuddly toy to school today, and I was wondering if I could take David Sky." EP almost choked on a gulp of extra strong morning tea and said, "But David Sky is not your normal cuddly toy. He's very naughty and might get into trouble. Are you sure that you can handle him? I'm not convinced that this is such a good idea. Take Pooh Bear or something." Rebecca was not to be put off. She did that head to one side and pleading eyes thing. "Pleeeease dad", she implored. "Mmmmm, I dunno", said EP trying not to buckle under the pressure. "Pleeeeeeease", she persisted. "Oh, alright then," I replied against my better judgement, "but you'd better mind that he behaves himself." So, off went Rebecca with David Sky poking out of her school bag.
A little later, the teacher, a bubbly Miss Roundsworthy asked the children for the names of their cudddly toys. She came to EP's daughter, "What's the monkey's name?" Before she knew what was happening, Mr Sky piped up, "I'm not a monkey, I'm a theologian!" The teacher was a little taken aback at this. She had never seen a talking theological monkey before. "You can talk!" she exclaimed. "Wow, so can you!", replied David Sky, "A talking teacher, well I never!" Now the teacher went into bossy mode, "No need to be like that, you naughty monkey. Sit down and be quiet!"
After that minor altercation, everything seemed to be going smoothly until a spiteful little girl cried out, "Miss, the monkey just bit me!" The teacher rushed to the scene. "Did you bite her?" demanded Mrs Roundsworthy. Mr Sky responded with dignified defiance, "No! I'm a theologian and we don't bite. I'm not a wild animal you know!" But the girl was believed over the theological monkey despite Rebbecca pleading, "He doesn't usually bite. We'll he did go for my dad's throat once, but that was quite out of character."
David Sky was marched off to the headmaster's office. Mr Bimblewit sat him on the naughty chair and then proceeded to ring me. He told me off for allowing my daughter to take a dangerous and very naughty monkey to school. The irate headmaster demanded that I come and remove the "vermin" from the premises forthwith. I had never been so embassased in my life. Although there was that time when....
I bundled DS into the car and drove him home. I told him off in my crossest voice and he just looked at me insolently and said, "What's the problem, stroppy head?" Oh dear. What I am going to do with the baddest theological monkey on the planet?
Click on the David Sky link below for more monkey antics.
Posted by Guy Davies at 1:38 pm

I think it might be time to apply 'The Drama of Doctrine' again!!

that excursion to school was worth 3 hardy theo-laughs, thanks