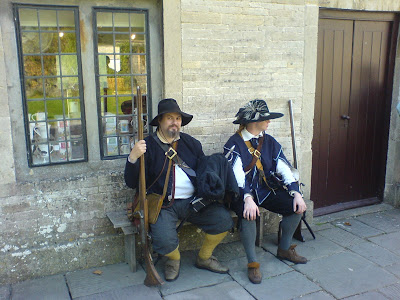 (See Kelly's comments below for the people behind this picture)

On Saturday, our children went to a Youth Conference. On the way to pick them up, Sarah and I visited Dyrham Park, a National Trust stately home. A contingent of the Sealed Knot Society, a Civil War reenactment group were performing in the grounds. All were dressed in 17th century garb. They marched back and forth, fired their muskets and wielded their pikes. It was a very enjoyable demonstration. But I wonder if our churches sometimes give the impression that we are the religious arm of the Sealed Knot Society. We put on a good display and speak in impeccable olde English, but are we little better than historical curiosities?

The task of the church is to perform the drama of God's redeeming grace before the contemporary world. In order to do this we must be faithful to the drama's biblical script and speak appropriately to the present day setting. The church cannot afford to alter the drama of redemption to suit the tastes of the moment. Then we would be heralding another gospel that is not another. But we must avoid giving the impression that the Christian faith belongs in some kind of cultural or historical backwater. The gospel is transcultural. Its message speaks to people of every age. Protestants of all people should realise this. Our forefathers translated the Scriptures into the language of the people so that their contemporaries could access the riches of God's Word for themselves. Tyndale's translation was faithful to the text of Scripture and up-to-date in its style. It is important to use version of the Bible that is as accurate as possible in modern English. People today often dismiss the Christian faith as out of date. They do not believe that the gospel has anything meaningful to say in the 21st century. Using a 17th century Bible translation may only serve to reinforce that impression.

A similar point could be made with regard to the use of modern hymns in worship services. The Church is an historic institution in a fast-changing age. Singing the great old hymns of Watts and Wesley reminds of our continuity with the past. But we should not shy away from singing modern compositions as a recognition of what the Lord is doing in the church today.

Matters get worse when praying in olde English, using the Authorised Version of the Bible and not singing contemporary hymns almost become a test of fellowship. Stuart Olyott, a well known preacher in the UK recently revealed that a church invited him to preach on the condition that he prayed in "thees" and "thous". When he refused to do so, the invitation was withdrawn. I was once quizzed about which Bible translation I use before being asked to preach to a certain church. I said that I usually use the New King James version, but would happily read and quote from the AV if that is what they preferred. However, that was not good enough as the church only accepts the ministry of "AV only men". Now, many who on principle use only the AV are not this narrow minded. But it is nothing short of tragic that we are dividing over such issues.

Belief in “Scripture alone” should liberate us from the dead weight of traditionalism. We must continue to reform our practices in the light of Scripture. Tradition can be helpful. But we must not become so “traditional” that we lose touch with the modern or postmodern world. We have been called to the kingdom for such a time as this! We do not belong to the 16th or 17th Centuries, we serve the Lord Christ in the 21st Century. We should not be so enamoured by the Reformers and Puritans that we begin to speak like them. They spoke in the language of their day – and so must we! To be fair I must also say that many who read from the AV in church preach in clear, contemporary English. Lloyd-Jones used the AV in his day, but listen to what he said,

"There is a grave and real danger for many of us to become traditionalists and legalists. There are some people who seem to take delight in using archaic phrases; and if you do not use them they doubt whether you are really preaching the Gospel at all. I have observed that certain young men who have developed a new interest, for instance, in the Puritans, start speaking and writing as if they lived in the seventeenth century. This is quite ludicrous. Let me sum it up in modern terms by asserting that it is always our business to be contemporary; our object is to deal with the living people in front of us who are listening to us". 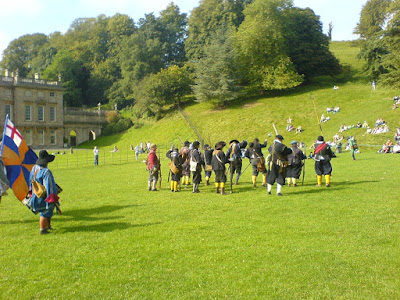 Slow start from Wales at the World Cup I see...

Thanks. I haven't seen the match yet, but I understand that Stephen Jones made all the difference when he came of the bench. 17-42 against Canada isn't too bad a scoreline.

Thou speakest much wisdom. Many goodly thoughts there be herein.

Based on this, I will try to give thanks for the tuneless, semi-rap version of Amazing Grace from the worship team next time.

Thanks for your comments and for posing for the photo! We really enjoyed our visit to Dyrham.

Great Post. That's all I can say. Completely agree.

The photo of two musketeers at the top of your 10th Sept blog shows my partner Dick and myself dressed as 17th Century soldiers in Charles Gerard's Regimente of Foote in the Sealed Knot. I'm the one without the beard!!

Just wanted to say thank you for coming along to Dyrham Park and watching our demonstration on the 8th Sept. Your debate about language barriers facing the modern clergy also yielded some interesting points for me. We in the Sealed Knot often debate whether to speak in the lingo of our period, and often settle for a mixture of both historical and modern when speaking to an audience of life in 17th Century Britain.