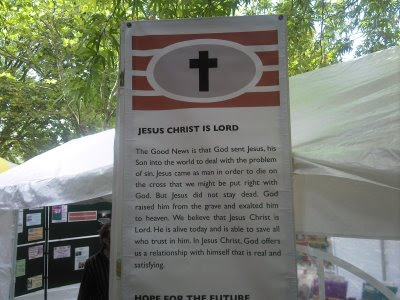 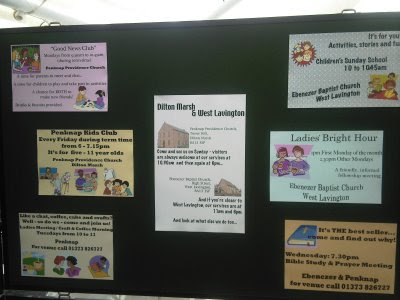 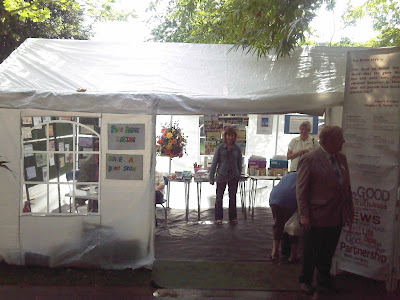 The Good News Partnership is a group of six local Grace Baptist and FIEC churches. For the last two years we have been working together to share the good news of Jesus with the people of West Wiltshire through street evangelism and open air preaching. In pooling our resources for the sake of the gospel we believe that we can be more effective than simply doing our own thing. The inspiration for the GNP was reading Geriaint Fielder's book, Grace, Grit and Gumption, the story of the Forward Movement of the Welsh Calvinistic Methodist Church. The Forward Movement was set up at the end of the 19th century to reach ungodly English speaking immigrants who entered Wales in droves at the time of the Industrial Revolution. The Movement pioneers were bold open air preachers. Seth Joshua and other Forward Movement preachers were powerfully used in the 1904/05 revival. See here for a preview sample. In a new venture the Good News Partnership bought a marquee (on Ebay!) and booked a pitch at the West Wilts Show in Trowbridge (Thursday 23rd - Saturday 25th July). In our 6 x 3 meter tent we have a range of Christian books for sale, arts and crafts for kids and a display of church info. We've been handing out a specially produced leaflet and copies of John Blanchard's Ultimate Questions. The churches take it in turns to man the stand.
As part of the Good News Partnership organising group, I helped to man the stand yesterday morning. The Penknap/Ebenezer churches I serve were on duty in the afternoon, so I spent the full day at the show. We had some good sunny spells, but when it rained, it poured.

We got off to a good start with a conversation with Andrew Murrison, the Westbury MP. He listened well as we gave a biblical perspective on the ills of society - how only God can turn things around. I've written to him several times in the past and had one or two conversations with him about Christian things. He always seems ready to listen to a Christian viewpoint. Please remember him in your prayers.

We had countless conversations with different individuals throughout the day. We were able to talk to parents/grandparents about the gospel while their children were in the marquee doing crafts. Most were willing to chat about the gospel and take literature. The rain worked for us as we were able to offer some activities in the dry! We engaged others in conversation as they walked past the stand. A Jewish stallholder from London was very open to thinking about Jesus. He had been impressed by seeing practical Christian love in action. I told him that my good friend Ben Midgely, pastor of North Bradley Baptist Church, was a Jew who believed in Jesus. Ben was standing nearby, deep in conversation with some other visitors to the show.

Most people I talked to said they believed in some kind of god. Several had rather confused ideas about Jesus. But some had a clearer understanding of Christ and the gospel. Quite a few people professed to be Christians who for various reasons had stopped going to church. I told them of the importance of belonging to a church and was able to point them to a fellowship in their area. The specially produced Good News Partnership leaflets were well used. We must have handed out scores of them. Many Ultimate Questions were also given away.

In all it was a very encouraging day as believers worked together to spread the Good News at the show. Please pray that God will cause the seed that has been sown to bear fruit as the Holy Spirit brings people to a saving knowledge of Jesus Christ.
Posted by Guy Davies at 8:15 am

Its really encouraging to see this - I pray many come in and pay attention to the exhibits!

Hi - I popped by today and caught a short talk by Prof Stuart Burgess. Also picked up his booklet "In Gods Image". I must admit to finding this whole creationist vs evolutionist argument fascinating, would have liked to have talked to him about it more - I did manage to have an interesting conversation with Ben Midgely about it, which I'm sure will be continued in due course. Thanks for getting out there and being part of this.

Thanks Glyn. Glad you found it helpful.