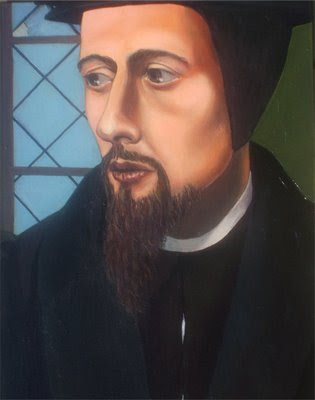 Not all are brought to saving faith in Christ. Why is it that some believe and others do not? This brings us to a discussion of Calvin's doctrine of predestination. Some are under the impression that predestination was the the main theme in his theology, but this is not the case. He doesn't even begin to discuss the doctrine until he nears the end of Book III of the Institutes. For Calvin presestination was not a matter of cold logic. He was convinced of it because he found the doctrine in Scripture, especially in Romans 8 and Ephesians 1. But he did not allow the doctrine to dominate his theology. The Reformer dealt with the election in a biblically proportionate way. Calvin taught that God has chosen to save some fallen human beings, simply on the basis of his free grace and love. He has chosen not to save others. They will suffer God’s just wrath for their sin. But how can we know if we are among the elect? We cannot peer into God's hidden decree of salvation. Calvin advises us to look to Christ, whom he describes as 'the mirror of our election'. If we are united to him by faith, then we can be assured that we were chosen in him before the foundation of the world.

"First, if we seek for the paternal mercy and favour of God, we must turn our eyes to Christ, in whom alone the Father is well pleased (Mt. 3:17). When we seek for salvation, life, and a blessed immortality [we must go to him], since he alone is the fountain of life and the anchor of salvation, and the heir of the kingdom of heaven. Then what is the goal of election, but just that, being adopted as sons by the heavenly Father, we may by his favour obtain salvation and immortality? How ever much you may speculate and discuss you will perceive that in its ultimate object it goes no farther. Hence, those whom God has adopted as sons, he is said to have elected, not in themselves, but in Christ Jesus (Eph. 1:4); because he could love them only in him, and only as being previously made partakers with him, honour them with the inheritance of his kingdom."

It is foolish, harmful and dangerous to contemplate election apart from Christ. We know that we are elect by believing in him and contemplating him,

"But if we are elected in him, we cannot find the certainty of our election in ourselves; and not even in God the Father, if we look at him apart from the Son. Christ, then, is the mirror in which we ought, and in which, without deception, we may contemplate our election. For since it is into his body that the Father has decreed to engraft those whom from eternity he wished to be his, that he may regard as sons all whom he acknowledges to be his members, if we are in communion with Christ, we have proof sufficiently clear and strong that we are written in the Book of Life." (Institutes III:24:5).

Calvin's Christ-centred doctrine of election helps to save the Christian from despairing of ever knowing if his name is written in the Book of Life.
*Portrait by Oliver Crisp.
Posted by Guy Davies at 2:05 pm

This is *exactly* the presentation of election that I've grown up with. How reassuring! Thanks!

~ We don't know who the elect are, but we know who the Elect Servant is - make sure you're united to him, and then issues about election can follow on in their own (his own) time.