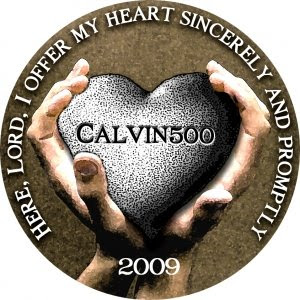 Calvin has a reputation (perhaps not altogether undeserved) of being a little tetchy and austere. Let us redress the balance (after all it is his 500th birthday today) with a brief consideration of the Reformer's view of the Christian life of liberty. Calvin believed that God, in his creation and providence has showered mankind with many gifts. We are to receive these gifts with joy as tokens of God's goodness. Calvin emphasised that all Christians are called to wholeheartedly serve the Lord, whatever their line of work. But while this life is not to be despised, we are driven by the sufferings of this world to long for the joys of everlasting glory in our heavenly home.

The Christian is a free man. The basis of Christian liberty is our justification by faith alone. The believer is free from the accusations of the law of God, having been justified by grace through faith in Christ. The Epistle to the Galatians is the great charter of Christian liberty, Galatians 5:1. Paul teaches that believers have been freed from the ceremonies of the law such as circumcision. We have also been liberated from the curse of the law in Christ who was made a curse for us. The law reveals the way in which Christians should live, but it cannot condemn us:

"For when the conscience feels anxious as to how it may have the favour of God...if brought to his judgement seat... the requirements of the law are not to be brought forward, but Christ, who surpasses all the perfection of the law, is alone to be held forth for righteousness." (Institutes III:19:3.)

We are not free to sin because we have been called by the grace of God to righteousness and holiness. But we do have freedom when it comes to adiaphora or things indifferent. This is a very important point,

"The knowledge of this liberty is very necessary to us; where it is wanting our consciences will have no rest, there will be no end of superstition." (Institutes III:19:3).

Within the bounds of modesty and self-control, believers are fee to eat, drink and wear what they please. Calvin taught this against a background where Roman Catholic traditions like eating fish not meat on Fridays were observed by many people. Such matters are adiaphora - the Christian is free to do as he pleases with regard to such issues. We are not bound by the traditions of men. Calvin ridiculed those who had scruples over eating good food and wearing comfortable and attractive clothing.

"If he hesitates as to a more genial wine, he will scarce drink the worst with a good conscience; at last he will dare not to touch water if more than usually sweet and pure. In fine, he will come to this, that he will deem it criminal to trample on a straw lying in his way." (Institutes III:19:7.)

Now, Christian liberty is to be used responsibly. We are not to abuse our freedom by offending the conscience of the weaker brother. On the other hand, we must not to yield to Pharisaical types who would seek to rob us of our true freedom in Christ. Christian liberty is one of the precious fruits of the gospel. Perhaps on this, the 500th anniversary of Calvin's Birth on 10th July 1509 it would be in order to raise a glass of genial wine in honour of the great man.
Posted by Guy Davies at 7:44 am

"Perhaps on this, the 500th anniversary of Calvin's Birth on 10th July 1509 it would be in order to raise a glass of genial wine in honour of the great man."