A very rough guide to Calvin's theology: The Trinity 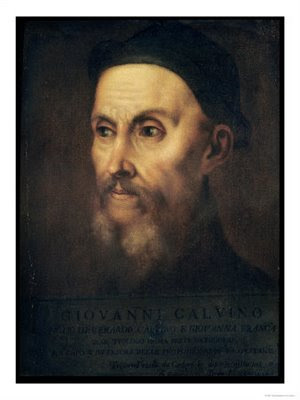 I sometimes wonder if the doctrine of the Trinity is neglected in contemporary Evangelical Christianity. We will arise to defend the doctrine in the face of attacks from so-called Jehovah's Witnesses and Islam. But is the biblical revelation that God is Father, Son and Holy Spirit a defining feature of the teaching, life and worship of our churches? How many of our hymns are explicitly Trinitarian? In our prayers are we conscious that we are calling upon the Father in the name of the Son in the presence of the Spirit? Does the Trinity feature much in our preaching and teaching? To all intents and purposes are many Evangelicals practical Unitarians? I’ve lost count of the number of times that I’ve heard believers begin their prayers by addressing the Father and then go on to thank him for dying on the cross!

Calvin can help us here. In the Institutes, you could almost say that the doctrine of the Trinity is his doctrine of God. The Reformer does not reflect on the Trinity after a prolonged discussion of the being and attributes of God. Without warning he simply introduces the subject in Book I , Chapter 13, "The Unity of the Divine Essence in Three Persons Taught, in Scripture, from the Foundation of the World". Calvin insists that God has revealed himself to us in Scripture as One God in three persons; Father, Son and Holy Spirit. He would have preferred a minimalist doctrine of the Trinity, saying, 'I wish, indeed that such names [theological terms like person, substance, etc] were buried, provided all would concur in the belief that the Father, Son, and Spirit, are one God, and yet that the Son is not the Father, nor the Spirit the Son, but each has his peculiar subsistence.' But in order to clarify and safeguard the truth in the face of heresy, Calvin was willing to employ the traditional formula that in the one divine essence there are three persons.
Contrary to more speculative teaching on the begotteness of the Son, the Reformer stressed that the Son did not receive his deity from the Father. He is God in his own right [autotheos] alongside the Father and the Spirit. The begotteness of the Son and spiration of the Holy Spirit should be understood relationally rather than causally. The Father is not to be conceived as the "fountainhead of the deity", communicating the divine essence to the Son and the Spirit. "the Godhead is absolutely of itself. And hence also we hold that the Son, regarded as God, without reference to his person, is also of himself; though we also say that, regarded as Son, he is of the Father. Thus his essence is without beginning, while his person has its beginning in God". (I:XIII:25). The Son, in his divine essence is I AM, the self-existing God. He does not derive his deity from the Father. He is Son in relation to the Father, but he is God because he is God. In the Godhead there is an order of persons; Father, Son and Holy Spirit, but no gradation of deity. Thus Calvin helped to correct subordinationist tendencies in the church's doctrine of the Trinity.
For Calvin, the doctrine of the Trinity is not a matter of abstract theological reasoning. We confess this truth on the basis of divine self-revelation in Scripture. The Reformer shows us that the Trinity of the godhead must be central to the teaching, life and worship of the Church. We should take great delight in the fact that by grace we have been brought into communion with the one God who is Father, Son and Holy Spirit. Calvin commended Gregory of Nazianzus' wonderfully meditative teaching on the Trinity,
"No sooner do I conceive of the One than I am illumined by the Splendour of the Three; no sooner do I distinguish Them than I am carried back to the One. When I think of any One of the Three I think of Him as the Whole, and my eyes are filled, and the greater part of what I am thinking of escapes me. I cannot grasp the greatness of That One so as to attribute a greater greatness to the Rest. When I contemplate the Three together, I see but one torch, and cannot divide or measure out the Undivided Light."
Posted by Guy Davies at 7:57 am