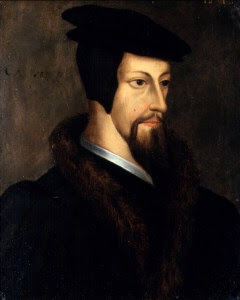 Calvin's life
2009 marks the 500th anniversary of the birth of John Calvin. He was born on Tuesday 10th July 1509. The child of up-and–coming French parents was to become one of the greatest and most influential of the Protestant Reformers. Originally his father had him educated for a career in the church. But Gerard Calvin had second thoughts about that. The legal profession offered more lucrative rewards, so John had to change tack. He threw himself into the study of law. The young Calvin sat at the feet of some of the foremost jurists and Latin scholars of his day. His rigorous education would serve him well later in life when Calvin deployed his learning in the service of Biblical scholarship and Reformed theology.

We don’t know exactly when Calvin turned his back on the Roman Catholic Church with its corruptions and false teachings. But at some point he came under the influence of the Protestant faith. He wrote in the preface to his Commentary on the Psalms,

"since I was too obstinately devoted to the superstitions of Popery to be easily extricated from so profound an abyss of mire, God by a sudden conversion subdued and brought my mind to a teachable frame, which was more hardened in such matters than might have been expected from one at my early period of life. Having thus received some taste and knowledge of true godliness I was immediately inflamed with so intense a desire to make progress therein, that although I did not altogether leave off other studies, I yet pursued them with less ardour."

In August 1536 Calvin found himself in Swiss city of Geneva, where William Farel was struggling to reform the Church. Farel was desperately in need of allies in the work of Reformation. He recognised that Calvin had the necessary godliness, gifts and abilities to advance the Reformed cause. But the young Calvin was somewhat reluctant to get involved. He preferred the reclusive life of a scholar to that of a preacher in the tumultuous city of Geneva. But Farel was not to be put off. The need was desperate and he was not a man to take “no” for an answer. The fiery Farel turned up the heat on the timid Frenchman. He said that God would curse his studies should he refuse to lend his assistance to the Reformed cause. Farel’s words struck Calvin like a thunderbolt,

"By this imprecation I was so stricken with terror, that I desisted from the journey which I had undertaken; but sensible of my natural bashfulness and timidity, I would not bring myself under obligation to discharge any particular office."

Perhaps despite himself Calvin became the leading pastor and preacher in Geneva. At first the city resisted his attempts to reform the Church and sent him packing to Strasbourg for a couple of years. Calvin was happy in Strasbourg, where he became pastor to the French refugees. There he was given the freedom to implement his ideas for reforming the church. It was during his stay in Strasbourg that Calvin met his wife. But the pro-Reformation interests in Geneva had begun to get a grip on the city. They invited Calvin back. After the grief and trouble he had suffered during his first Genevan period, the Reformer was none too keen to return saying, “Rather would I submit to death a hundred times than to that cross on which I had to perish daily a thousand times over.”

But return he did. On the first Sunday Calvin reoccupied his pulpit in St. Peters Cathedral, he took up where he left off in his series of sermons on Colossians. It was business as usual.

The Reformer was above all a preacher. For one week in two he would preach every day and twice on Sundays. He produced learned and accessible commentaries on most books of the Bible. His reforming work in Geneva provided a pattern for Reformed churches across Europe. The Scottish preacher John Knox called Calvin’s Geneva “A most perfect school of Christ”.

Exhausted by his labours and racked by ill health, Calvin died on 27 May 1564. In accordance with his instructions, the self-effacing Reformer was buried in an unmarked grave.
Calvin the theologian
Calvin was one of the great theologians of the Reformation. Indeed, he can be ranked alongside Tertullian, Athanasius and Augustine as one of the foremost theologians of the church in all ages. In our exploration of some of the main themes in Calvin's theology, we will follow the contours of his Institutes of the Christian Religion. The Institutes began life in 1536 as a brief outline of Protestant doctrine. But over the years, Calvin updated expanded his work until it reached its final form in the definitive 1559 edition.

In the fully expanded Institutes, Calvin intended to provide a summary of the Christian truth in all its parts. With that summary in mind, people could then read their Bibles with greater understanding. Also, because he had discussed doctrinal issues at some length in the Institutes, he did not feel obliged to go over such points again in his commentaries,

"Having thus, as it were, paved the way, I shall not feel it necessary, in any Commentaries on Scripture which I may afterwards publish, to enter into long discussions of doctrines or dilate on common places, and will, therefore, always compress them. In this way the pious reader will be saved much trouble and weariness, provided he comes furnished with a knowledge of the present work as an essential prerequisite."

The Institutes is Calvin’s theological masterpiece. While Calvin did not set out to write a complete systematic theology, in the Institutes he gives us a thorough, warm and clear exposition and defence of Reformation doctrine. On the whole, Calvin avoided the speculative excesses of medieval scholastic theology. He was above all else a biblical theologian. But Calvin wasn't above using the insights of the scholastics when it suited his purpose. The remainder of this series will be something of a whistle-stop tour of some of the key themes in Calvin’s theology.
Posted by Guy Davies at 2:15 pm

I really want to send you a copy of 'The Unaccommodated Calvin' - I think you'd really enjoy it. Muller makes some interesting points about Calvin's relation to scholasticism - namely that Calvin is closer to scholasticism than we think, but we often misunderstand what scholasticism was. As it stands, the 'Institutes' is a lot like scholasticism meets humanism (in the Renaissance form of the word) meets Reformation. So the 'loci disputationes' is reminiscent of the scholastic approach, the warm style comes from the humanism influence and the theology comes from the biblical texts.

This Sat we're having a Calvin day at church with four papers being given - I'm giving the one on Calvin's method and motives. There are others on biography, his doctrines and Calvin for today. If you're free you'd be welcome to come up - sorry about the short notice - it's at Wheelock Heath Baptist Church just off junction 17 of the M6.

I haven't seen Muller's work on Calvin, but Paul Helm says something similar in his 'John Calvin's Ideas'. The notion that before Calvin there was boring old scholasticism, but he broke free only for the next generation of Reformed theologians to suffer a relapse is a gross oversimplification. As I hinted, JC wasn't above using the insights of the scholastics in the service of Reformation theology.