N. T. Wright on schism in the Church of England 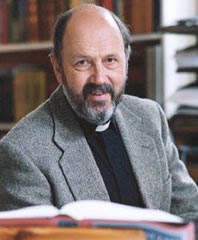 See here for Tom Wright's piece in the Times Online on why the House of Bishops of the Episcopal Church in the United States was wrong to vote in favour of the ordination of practicing homosexuals. Aside from the ecclesiastical politics, he makes a well argued case in favour of heterosexual marriage as the only biblically sanctioned context for sexual expression.
Also, see here for David Robertson's salient reflections on the Church of Scotland's decision to ordain practicing homosexuals.
Posted by Guy Davies at 11:24 am

I am in Maryland USA. My husband received an e-mail with a link to the TimesOnline article by Bishop Wright.

Our Maryland bishops were divided in the recent U. S. "homosexual clergy" vote - 3 in favor and 2 opposed.

We have been visiting regularly and participating in a nearby Episcopal church for a year. Now we do not know if we should join the local church or what to do. This is a sad day for the Episcopal church in America, in my view, and also for the church's outreach to help those in homosexual lifestyles that many might well leave if helped. I have heard Catholics testify of their church's help in this way. I will revisit your blog to see if you have more updates on this topic