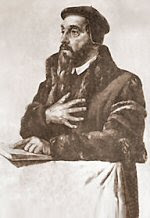 The fourth and final Book of the Institutes is devoted to The Holy Catholic Church. John Calvin was profoundly interested in church life. He worked tirelessly to reform the church in Geneva, seeking to establish the work on a more biblical pattern. He reformed her structure and worship in accordance with Biblical teaching. According to Calvin, a true church is defined by gospel preaching, the right administration of the sacraments, and loving discipline of the membership. Church members are to be born again people, visible saints, who exercise their gifts for the good of the body of Christ. The Reformation gave emphasis to the preaching of the Word as the means by which sinners are saved and the people of God built up as a kingdom of priests. But Calvin was realistic enough not to expect perfection in the visible church, which he distinguished from the invisible church, comprising of all God's elect.

Under the heading of the Church, I also want to say something concerning Calvin's thinking on Baptism and the Lord's Supper. The Reformer disliked Luther's teaching on the Lord’ Supper. Luther argued that in being glorified, the humanity of Christ took on the property of omnipresence. Because of that his flesh can be with and under the bread and wine at the Supper. For Calvin, this view displayed a terrible misunderstanding of the communion of attributes in the Person of Christ, and compromised the reality of our Lord's continued incarnate life. But he also disagreed with Zwingli's doctrine, which made the Lord's Supper little more than a trip down memory lane. Calvin proposed that Christ is present at the Table by his Spirit. The Spirit compresses the distance between the believer and the flesh of the ascended Christ as we feed upon him by faith at the Lord's Supper.

Calvin believed that the children of believers as well as adult converts should be baptised. This is one area where we Calvinistic Baptist disagree with the great man. The New Testament everywhere insists that baptism follows faith. The children of believers are to be treasured and brought up in the nurture and admonition of the Lord. But they are not to be baptised until they come to believe in Christ for themselves.

What of the relation between Church and Society? Calvin believed that it was the duty of the civil magistrate to uphold both tables of the law. It was this idea got Calvin into trouble in the Servetus case. Servetus was an anti-trinitarian heretic, who was arrested on visiting Geneva. He was sentenced to be burnt at the stake by the Genevan authorities. Calvin asked that he should be executed more humanely. But he nevertheless consented to the judicial killing of Servetus for the 'crime' of heresy. We should not try to exonerate Calvin for his role in this affair. He was a man of his time, yes. But his knowledge of the gospel of Jesus should have taught him better. This sorry episode reminds us that even our heroes have their blind spots. The powers of the state should not be used to suppress heresy. The church's weapon against false teaching is the sword of the Spirit. We must be willing to suffer and die for the truth, but never kill for it.
Posted by Guy Davies at 7:51 am

Guy, just wanted to thank you for this series of 'very rough guide' posts. I'm enjoying and benefitting very much and finding it just slightly easier than re-reading the Institutes myself!

Thanks Matt, but I'm afraid there's no substitute for the real thing. My blagger's guide will only get you so far.